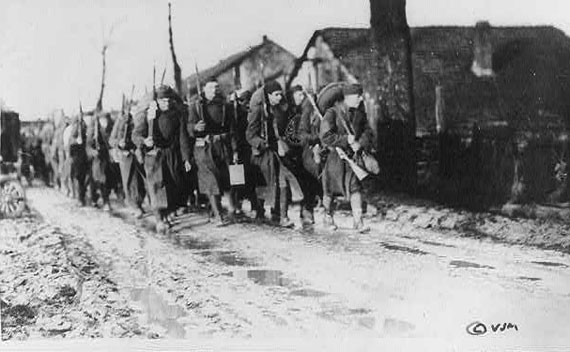 TWE tips its cap to all of America’s veterans for their service to the country. Thank you.

History buffs know that Veterans Day began as a way to commemorate the armistice that ended the fighting in World War I. (Fighting ended on the eleventh hour of the eleventh day of the eleventh month of 1918.) Indeed, Veterans Day was known as Armistice Day until 1954, when it was renamed to honor the heroism and sacrifice all Americans, past and present, who served in uniform.

Less well known is the story of the congressional midterm elections held just six days before the Armistice went into effect. It is a story worth recalling because it bears out a theme of TWE: partisanship rather than bipartisanship has been the norm of American foreign policy.

After the United States entered the war in April 1917, the Democrats, who controlled the House and Senate as well as the White House, and the Republicans observed an uneasy domestic political truce. Neither sought overtly to win political credit from the war effort. But with the war winding down and Democratic Party leaders egging him on, President Wilson “hurled a brick into a beehive,” as one historian put it, in October 1918 by calling on voters to go to the polls to vote in a more Democratic Congress. Doing otherwise, he suggested, would weaken his hand in peace negotiations.

Voters didn’t respond as Wilson had hoped. Rather they returned control of both the House and Senate to the Republicans for the first time since Wilson’s election in 1912. (No one knows whether Wilson’s speech had a role in how the elections played out.)*

Republicans understandably resented what they saw as Wilson’s effort to make political gain out of the war, and they gladly spent the next two years working to derail his plan for a League of Nations. This partisan anger was reinforced by a fair dose of personal animus. Republican Henry Cabot Lodge, chairman of the Senate Foreign Relations Committee, despised Wilson. As George Herring recounts in From Colony to Superpower, Lodge said he “never expected to hate anyone in politics with the hatred I feel towards Wilson,” who he thought was, with the exception of James Buchanan, “the most dangerous man that ever sat in the White House.”

I’ll return to the Wilson-Lodge spat in a future post. The lesson for now is that the current bout of partisanship and personal animus along Pennsylvania Avenue has precedent.

*More History Than You Asked For. The Republicans almost didn’t win control of the Senate. Henry Ford—yes, that Henry Ford—narrowly lost his bid for one of Michigan’s Senate seats. The victorious Republican candidate, industrialist Truman Newberry, was indicted after the election and convicted of running roughshod over the campaign finance laws of the day. The Supreme Court, however, eventually overturned the conviction. In January 1920, the Senate resolved that Newberry had been properly elected but nonetheless “severely condemned” his campaign spending practices as “harmful to the honor and dignity of the Senate.” Had Ford won, Senate seats would have been split evenly between the two parties, with the Democrats regaining control because of the Democratic vice president’s deciding vote. History might have looked quite different if Ford had been a better candidate or Newberry had not able to match Ford’s immense wealth.

(Photo: American "doughboys" going forward to take up position in the Argonne regions, October 24, 1918. Courtesy of the Library of Congress)