So writes Martin Wolf. And despite some signs of hope this morning, he is certainly right.

The IMF’s latest global forecast leaves no doubt on this point. The IMF should be commended for dropping its usually measured language when circumstances, unfortunately, call for candid, vigorous prose. The IMF’s note for the G-20:

"The prolonged financial crisis has battered global activity beyond what was previously anticipated. Global GDP is estimated to have fallen by an unprecedented 5% in the fourth quarter (annualized), led by the advanced economies, which contracted by 7%. GDP declined by around 6% in both the United States and Europe, while it plummeted at a post-war record of 13% in Japan. Growth also plunged across a broad swath of emerging economies ... against this backdrop, global activity is expected to contract in 2009 for the first time in 60 years." (emphasis added)

The most visible manifestation of the scale of the downturn continues to come from Asia -- with the sharp fall in Asian exports to the world mirroring the sharp fall in global demand. Japan’s exports are now down 50% from last February. The IMF is now forecasting a 6% of GDP contraction in Japan in 2009. That is a contraction of magnitude as emerging economies experience during their crises.

While growth is expected to be stronger in many parts of Asia than in Japan (India and China are expected to be able to find domestic sources of growth), the trade data doesn’t alas, look at that different. 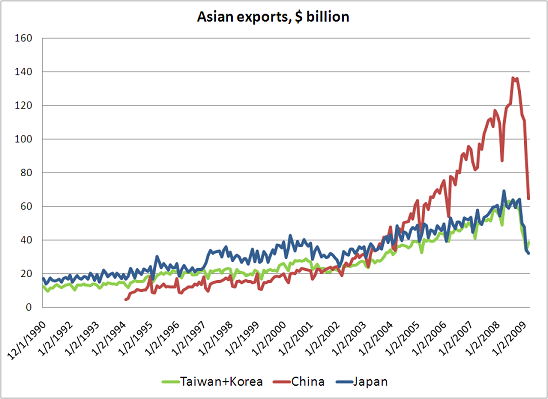 The pace of decline in Korea and Taiwan’s exports did moderate in February, but at least some of that was a by product of the timing of China’s new year. That though offers the only glimmer of hope in the Asian trade data. The y/y fall in China and Japan still hasn’t hit bottom. 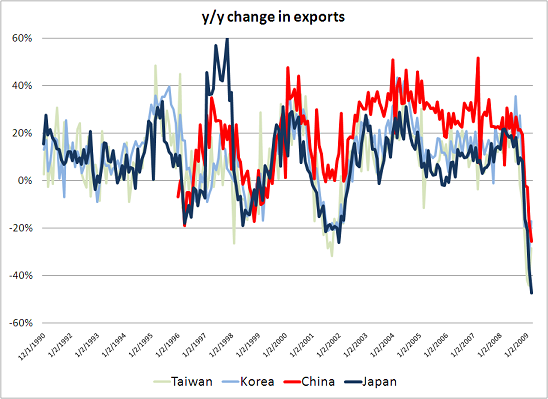 Much of the expansion of global trade over the last decade -- like much of the expansion in cross-border financial flows -- rested on a weak foundation. It required an unsustainably high level of consumption in the US -- and, at the tail end of the boom, a bit of a consumption bubble in the UK, Spain and a host of new European economies as well. And rather than adjusting gradually, the adjustment is coming far too quickly.

One last point: the IMF’s analysis (see appendix 1, and pp. 27-32) of the size of different countries fiscal stimulus is interesting. China’s discretionary fiscal stimulus is among the largest. But it has weak automatic stabilizers. Consequently, the inclusion of automatic stabilizers increases the size of Europe’s fiscal policy response, but not China’s.

If the size of the fiscal stimulus is measured by the swing in the government’s fiscal balance from 2007 to 2009, China’s effort looks a bit less impressive than say the United States effort. It is roughly comparable to Europe’s effort. The IMF forecasts a 4.8% of GDP rise in the US fiscal deficit (using their definition of the deficit, which excludes financial bailout costs), a 4.4% rise in the deficit of the European members of the G-20 and a 4.5% swing in China’s deficit.

All in all, fiscal policy clearly is being used to support global growth, as it should be. The fall in exports globally in February leaves no doubt that there is an enormous shortfall of demand, relative to the world’s capacity to produce. But the global decomposition of the stimulus doesn’t suggest that it will do much to support "rebalancing." The surplus counties generally aren’t leading the stimulus league tables.