To be sure, the pace of China’s dollar reserve accumulation slowed when “hot money” moved out of China in q4 2008 and q1 2009 (see this graph). But there are some (tentative) signs that reserve growth is starting to pick back up – we will know when China releases its reserves data for q2.

And there certainly is no shortage of evidence that China’s public complaints about the safety of US financial assets haven’t kept it from buying US Treasuries.

In March, China – according to the TIC data -- bought $14.85b of longer-term bonds and $14.5 billion of bills. Talk about not putting your money where your mouth is. As a result, China’s Treasury portfolio – shown here disaggregated between bills and bonds – continues to rise. 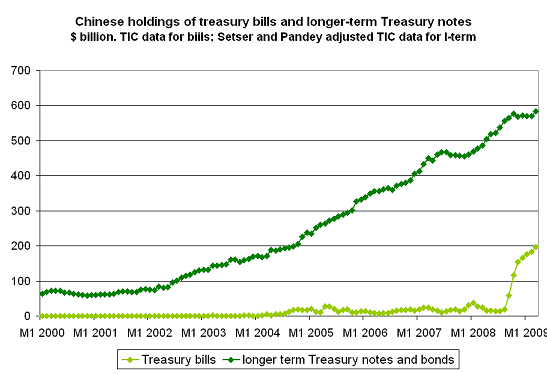 Over the last 12ms, China has bought around $270 billion in Treasuries -- $173b of bills and $98b of longer-term notes. That surge came even as Chinese reserve growth slowed. China, in effect, stopped buying all US assets other than Treasuries. Agencies especially. 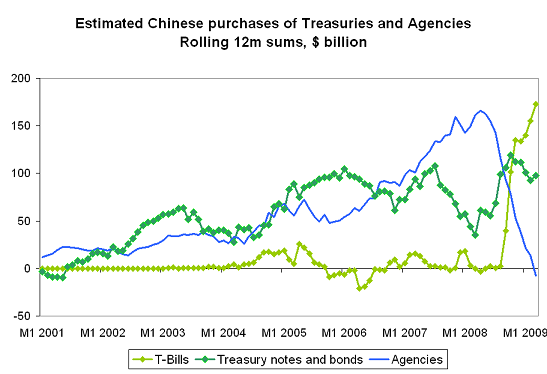 The shift in China’s portfolio during the crisis – described in more detail in an updated paper that I have done with Arpana Pandey of the Council on Foreign Relations -- mirror the global data almost perfectly. China wasn’t the only foreign investor that shifted out of Agencies and into Treasuries – or, for that matter, the only investor who stopped buying US equities and corporate bonds.

Russia sold its Agencies to buy short-term Treasury bills. Its holdings of non-Treasury short-term securities have gone from $97 billion at the end of 1997 to $1 billion at the end of March 09 while its holdings of Treasury bills rose from next to nothing to $73 billion. A host of smaller central banks did something similar. And private investors abroad – including, I suspect, European banks – wanted more bills too. 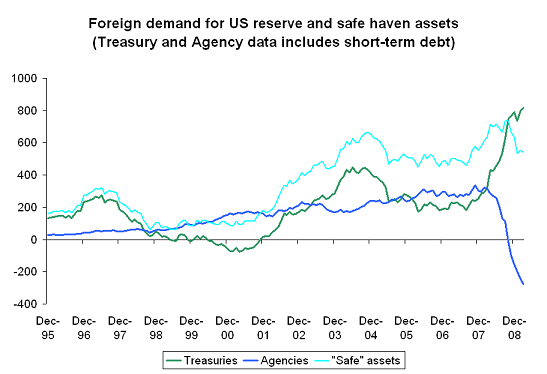 The fact that key foreign investors didn’t lose faith in Treasuries when they lost confidence in the debt of the Agencies, private US financial institutions and issuers of asset-backed securities helps to explain the dollar’s resilience during this crisis.

There frankly isn’t much more to say about the TIC data these days. Foreigners are consistently buying only one type of US asset. Ok, there was a bit more foreign interest in US equities in March too. But the scale of the inflow into equities was dwarfed by the inflow into Treasuries.

I understand the logic of this flow.

The crisis reminded central bank reserve managers that they cannot take much credit risk. They cannot – politically – afford to take visible losses. And as long as they report their reserves in dollars, holding Treasuries is the one safe choice. Some central banks and sovereign funds also underestimated their needs for liquidity. Kuwait and Abu Dhabi, for example, have had to draw heavily on their foreign assets to finance domestic bailouts.

At the same time, China’s increasingly rhetoric isn’t an accident. It reflects what seems to be a widespread sense inside China that US treasuries aren’t a good investment.** Private Chinese savers presumably wouldn’t want to buy Treasuries at current rates. But China’s current exchange rate regime compels China to buy dollars when private Chinese investors don’t want them.*** The result: a strange world where China’s government ends up buying an asset that China’s people currently do not want …

That is one of many ironies of the Bretton Woods 2 system. Its stability hinges on the willingness of central banks in the key surplus countries to buy dollars when private investors in their countries won’t.

*The methodology that Arpana Pandey and I use to estimate China’s purchases actually suggests a somewhat smaller number for China’s March purchases, as we attribute some purchases through London to China. In March the UK was a net seller of Treasures, which mechanically reduces our estimate of China’s total holdings a bit. The different though is truly trivial.

** These arguments tend to put more emphasis on the (growing) US fiscal deficit and less emphasis on the (shrinking) US trade deficit than I would. And they ignore the fact that dollars never were a good investment for China, as China was buying dollars precisely because there was market pressure for the dollar to fall and the renminbi to rise. For the sake of simplicity, I am ignoring those periods when private money was moving out of China, as I suspect the current bout of optimism about China’s growth prospects has reduced those flows.

*** China could then sell those dollars for other foreign currencies. But if those sales drove the dollar down, they would also drive China’s currency down so long China pegs tightly to the dollar. That would not please many of China’s trading partners.