Skip to main content
What keeps Zhou Xiaochuan up at night

Friday’s Lex column highlighted the possibility that China’s real reserve growth may be far higher than the published increase in its reserves – and thus a lot more hot money may be flowing into China than the published increase in China’s reserves implies. Michael Pettis – drawing on the work of Logan Wright of Stone and McCarthy - and I have both published online estimates of the “true” pace of Chinese reserve growth. Wang Tao – formerly of the Bank of America – and Stephen Green of Standard Chartered have done similar work.

For China, the scale of hot money inflows are key measure of the sustainability of China’s current policy course – and the efficacy of China’s capital controls. China has hoped to combined higher interest rates than the US with a steady (neither too fast nor too slow) pace of renminbi appreciation. That makes the RMB about as close to a one-way bet as exists in today’s financial markets. Unless the RMB falls against the dollar, an RMB deposit will deliver higher returns than a dollar deposit just because of the interest rate differential. And if the RMB appreciates, the gains are quite large.

That in turn means that the sustainability of China’s current monetary and exchange rate policy rests on the efficacy of its capital controls – controls that keep everyone in the world from trying to profit from a one way bet on China’s currency. Absent effective controls China would have to adjust its policy by either:

For the rest of the world, capital inflows matter both because of their implications for the sustainability of China’s exchange rate regime and because the scale of hot money inflows – combined with the scale of China’s trade surplus and FDI inflows – determines the pace of growth in the foreign portfolio of China’s state.

That matters for a host of reasons. Suppose fx traders see the PBoC selling $60 billion worth of dollars for euros and pounds in a single quarter. If China’s reserves are increasing by $120 billion, that kind of scale would suggest diversification at the margin – i.e. China is trying to reduce the dollar share of its overall portfolio. If China’s reserves – counting the funds in the CIC and state banks – are growing by $200-240 billion, such sales would be consistent with maintaining the current dollar share of China’s reserves. China’s purchases have an impact on a host of asset markets.

So what is going on –

In the comments on an earlier post, a reader requested a graph showing the contribution of valuation gains to China’s reserves growth. I have consequently plotted both China’s “headline” reserve growth against the likely sources of its reserve growth – valuation gains on its existing holdings, its trade surplus, its estimated interest income and FDI inflows. The gap between reserve growth and these known inflows is the standard measure of “hot money”.

I have also added the likely increase in the banks foreign assets due to the “suggestion” from the PBoC that they meet their reserve requirement by holdings dollars. This has emerged as significant sources of additional “quasi-reserve” growth over the past nine months. Transfers to the CIC reduce reported reserve growth, and foreign exchange held by the banks at the request of the PBoC has the same effect. The precise timing of the transfers to the CIC isn’t known – I have assumed that all the RMB1.55 trillion the CIC raised was transferred by the end of q1 and further assumed that the $67 billion the CIC spent buying Huijin still shows up in the reported reserves of the People’s Bank (i.e. the CIC’s total purchases, net of huijin, are roughly $135-140 billion)*

Basically, this is the same data that Michael Pettis reported in early April, just presented graphically.* 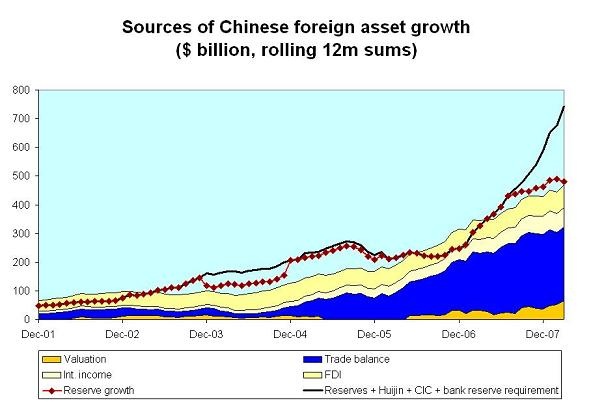 What does this data show? Well, if the CIC received large sums in q1 – as seems likely – China’s foreign asset growth is really very, very high. The increase over the last 12 months is close to $750 billion – and only about $65 billion of that increase is explained by valuation gains (note: if China has a higher euro share of its portfolio than I have assumed, valuation gains would explain more of the increase)

To make the increase in hot money flows more obvious, I plotted the “hot money” inflows implied by China’s reserve growth and the hot money inflows implied if the bank’s reserves and the CIC transfers are taken into account in a separate graph.

As Fan Gang hints, there has been a significant increase in inflows to China as the US economy has slowed and the Fed cut US rates.

Note that both measures imply large “hot money” outflows in 2006. That is almost certainly a by product of a set of measures that China adopted in 2006 that led “private” investors in China to add over $100 billion to their holdings of foreign debt. Once the increase in private outflows is taken into account, there wasn’t a real “hot money” outflow from China. Rather, the PBoC seems to have shifted a lot of funds through the use of swaps to the state banks to manage. As I noted above, I haven’t figured out how to reconcile the set of adjustments needed to capture this shift with the more set of adjustments needed to pick up the growth of the CIC and the increase in dollar holdings associated with the rise in the reserve requirement.

The previous charts imply that the pace of growth in China’s foreign assets picked up substantially in q4 2007 and q1 2008. That increase is easier to see by looking at the 3m change in China’s reserves and foreign assets relative to known sources of reserve growth.

I realize that the implied growth in China’s foreign assets in q1 is very, very high -- almost too high to be credible. On the assumption that the CIC received around $25billion in the fourth quarter and $100 billion in the first quarter, the q1 increase in China’s foreign assets looks to be in the $220-240 billion range. If the CIC received more funds in Q4 and fewer in Q1, the increase would be smoothed out a bit. If China has more euros and fewer dollars, valuation changes would explain more of the increase. But even taking these sources of uncertainty into account, there is enough evidence to think that China faces a very acute problem.

The world too. If Chinese foreign asset growth continues at its current pace, China’s government, the Bank of Russia, the Saudi Monetary Agency and a few Gulf sovereign funds will pretty much be the global financial system.

*The estimates for China’s foreign asset growth presented here should not be compared to my earlier estimates of Chinese foreign asset growth. My earlier estimates used a different methodology -- one that picked up (I think) the funds the PBoC shifted to the state banks in 2006. However, that methodology doesn’t seem to pick up the rise in the banks foreign exchange holdings as a result of the reserve requirement. I haven’t found a way to reconcile the two methods in a way that I am sure avoids double counting. China also hasn’t released the 2008 data needed to update my earlier estimates.

Adapting to the state&#8217;s growing role in global equity markets