Skip to main content
Which U.S. States Win and Lose Most From Falling Oil Prices?

Oil prices are plunging. Which U.S. states will benefit most – and which are most at risk? A study that we published about a year ago looked at exactly this question. The research, by Mine Yucel of the Dallas Fed and Stephen Brown of UNLV, ranked Wisconsin, Minnesota, and Tennessee as the biggest potential winners, and Wyoming, Oklahoma, and North Dakota as those with the most to lose.

Oil prices have fallen by about twenty percent in the last few months. Brown and Yucel combined statistical analysis of the historical relationship between oil prices and employment with current data about state economies to estimate what a twenty-five percent price rise would do jobs. They note that the same analysis can generate insight into the potential impact of a price plunge. The map below, which I’ve created by assuming that an oil price drop is as bad for jobs as an oil price rise is good for employment (Brown and Yucel discuss the value and limits of such an assumption in the paper), shows the results. 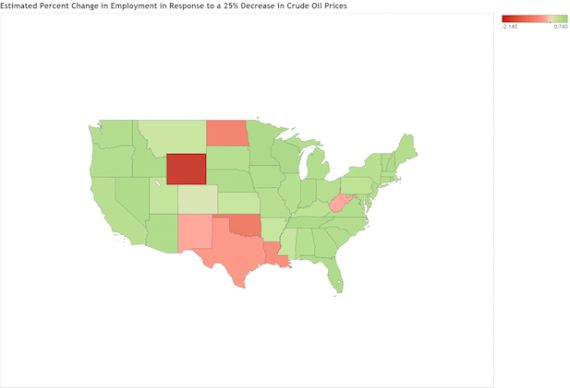 Brown and Yucel add some additional insight into the dynamics at work here:

“States like Texas and Louisiana that have downstream oil and gas industries that benefit from falling energy prices such as refining and petrochemicals would be less affected. In addition, states in which natural gas is more prominent than oil are likely to see less harm from falling oil prices. With the recent weakening in the relationship between oil and natural gas prices, a decline in oil prices does not necessarily imply as big a change in natural gas prices as it once did, lessening the effect of an oil price decline.”

“When oil prices collapsed to near about eleven dollars per barrel in 1986, the Texas economy went into a deep recession for two years. Economic output contracted 5.6 percent and employment fell 1.1 percent…. Even though oil and gas extraction accounted for 19 percent of the Texas economy in 1981, that share was the second smallest among the eight oil-sensitive states (West Virginia was smallest). As a percentage of state GDP, the oil and gas sector accounted for 49 percent in Alaska, 37 percent in Wyoming, 35 percent in Louisiana, and 20 percent in North Dakota. The 1986 oil price crash also caused a recession in most of these states, with employment declines largest in Wyoming (-5.9 percent) and Alaska (-4.5 percent)—states with the largest oil and gas output shares.”

The historical record – both anecdotal and leveraged using statistics – is far from a perfect guide to the future, particular with massive changes in the U.S. oil and gas industry in recent years. And the fall in prices isn’t yet remotely comparable to 1986. Nonetheless, if you’re looking to see where and how falling prices might help or pinch economically, the Brown and Yucel study is a great place to start.

What My Book <EM> The Power Surge </EM> Got Wrong