Skip to main content
Who bought all the Treasuries the US issued in 2008? And who will be the big buyers in 2009?

And just how important is China -- clearly now the largest single holder of Treasury bonds -- to the market?

Both questions matter more than ever -- to the market, and to the US government.

There is no doubt that central banks and sovereign funds, led by China’s reserve managers, were huge buyers of Treasuries in 2008. The work I have done with Arpana Pandey suggests that central banks bought close to $600 billion Treasuries in 2008 -- with China accounting for a bit over half the total. Total central bank reserve growth likely was around $1 trillion in 2008 (though obviously it was much higher earlier in the year than later in the year; $600 billion is consequently a plausible sum. That estimate is far higher than the number reported in the TIC data -- but the TIC data also is known to under count central bank purchases. Watch what happens when the survey data comes out. $600 billion is also a record. Back in early 2004 -- at the peak of Japanese purchases -- total purchases of Treasuries only reached $300 billion. 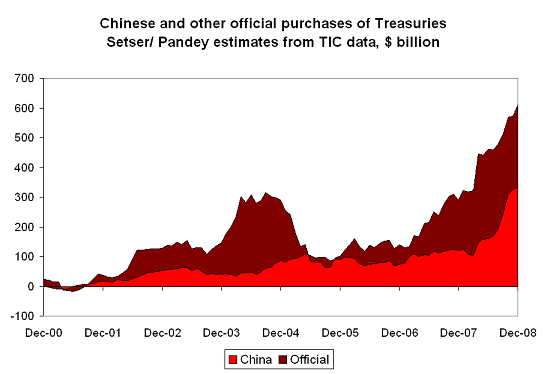 The US must then now be completely dependent on the central bank bid. 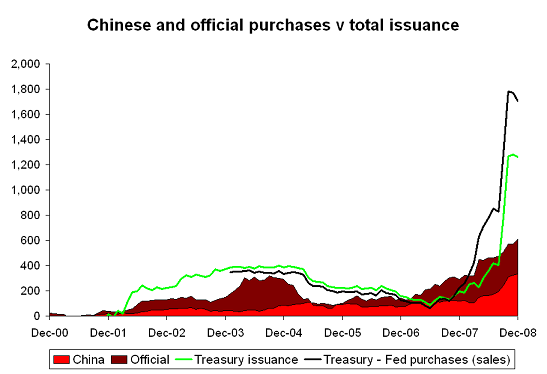 That implies, if the Pandey/Setser estimates for official purchases are right, that private investors snapped up more Treasuries than the world’s central banks. Central bank demand accounted for a far smaller share of total issuance than in the past few years. In 2007, for example, central bank purchases easily exceeded total issuance. The big increase in demand for Treasuries in 2008 came from private investors in the US. The "money" graph: 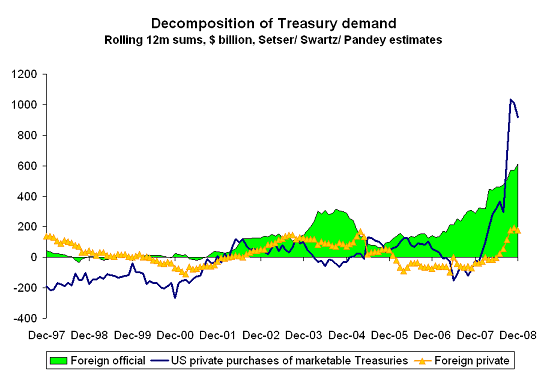 Moreover, with global reserve growth slowing -- total reserve growth was close to zero in q4, and it may not be all that much higher in q1 -- central bank demand for Treasuries is likely to fall. Central bank purchases in the last part of 2008 were inflated by a shift out of Agencies, but that (presumably) won’t continue forever.

That implies, I think, that the ability of the US to finance large deficits at low rates depends far more than it has in the past on private investors willingness to buy Treasuries. That was in doubt a few weeks ago when the markets were focused on the risk of a Treasury bubble and the scale of the Treasury issuance associated with the stimulus and various bailouts. Now the market is more focused on the risks tied to a strong global downturn -- and the remaining risks in the financial sector ...

Net/ net is the US more or less reliant on China? That is an issue that seems to be on everyone’s mind.

Andy Xie expresses the common concern over at the New York Times:

China is the largest owner of the U.S. treasury bonds. Some estimates put China ‘s holdings of the U.S. debt papers at $1.7 trillion. Since President Obama’s $783 billion fiscal stimulus will be financed by issuing more treasuries, there’s no doubt China’s continued buying of the bonds will be essential.

In one sense, Xie is right: The sheer scale of the United States’ governments borrowing makes every buyer more important.

If China suddenly stopped buying Treasuries in the way it stopped buying Agencies last June, it would almost certainly have an impact on the market. Unless, of course, the Fed stepped in -- but that too would have consequences.

On the other hand, today’s world is very different from the world of 2005, 2006, 2007 or even the first half of 2008. The United States’ current account deficit is smaller, which means that there is less money for the surplus countries (in aggregate) to recycle back into the Treasury market. Nor are emerging market central banks recycling private capital inflows back into the Treasury and Agency market.

Conversely, America’s household savings rate has increased – and Americans, after long shunning low yielding Treasuries in favor of risk assets with more (potential) upside --- have rediscovered the joy of knowing that you will get your money back, with a small amount of interest.

A world with $1750 billion US fiscal deficit and a $500 billion US current account deficit only works if Americans are willing to buy an awful lot of Treasuries. The borrowing need of the US government is now far too big to be covered by the (much reduced) growth in the emerging world’s reserves.

That leaves aside the possibility that key central banks might reallocate their portfolios. Americans could buy a lot of Agencies, allowing a country like China to finance Treasury purchases through Agency sales. But setting aside flows into the Treasury market from the ongoing sale of Agency debt, the slowdown in global reserve growth implies a slowdown in central bank financing of the US.

Even as issuance rises.

The overarching assumption behind the stimulus is that a rise in US household savings (linked to the fall in US household wealth) will create a pool of domestic savings that will flow, given the ongoing contraction in private investment, into the Treasury market. The rise in private savings and fall in private investment will allow the US government to borrow more even as the US economy as whole borrows less from the rest of the world. The key to the Treasuries rally in 2008 was the surge in private demand, not the strengthening of official demand. My guess is that the Treasury market will be driven by developments in the US – not developments in China – in 2009. 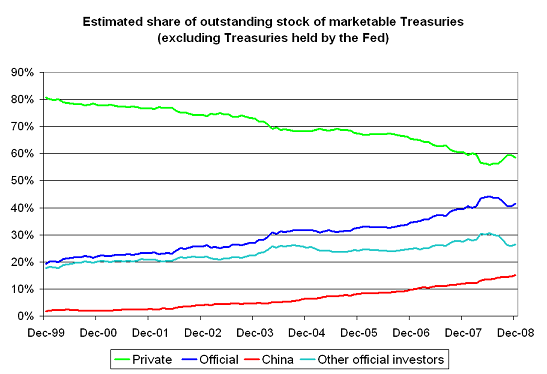 That isn’t at all implausible if capital outflows from China subside. Let’s say other central banks buy another $200 billion (which implies a further reduction in central banks’ share of the outstanding stock of Treasuries in the market). Custodial holdings of Treasuries over at the New York Fed have continued to creep up in the first two months of 2009, even as overall global reserve growth remains subdued. The resulting $450 billion in total central bank purchases would be the second highest level of demand for US treasuries from foreign central banks on record. But the math only works if private investors snap up $1250 billion of Treasuries, or a little more than they bought in 2008.

Thanks to Paul Swartz and Arpana Pandey for help with the collection and analysis of the Treasury issuance and TIC data. The data on the outstanding stock of marketable Treasuries comes (via bloomberg) from the monthly statement of the public debt. The adjustment for Treasuries held at the Fed is based on the Fed’s balance sheet data. Our methodology for estimating true official purchases of Treasuries is explained in our recent paper on China (watch for an update).