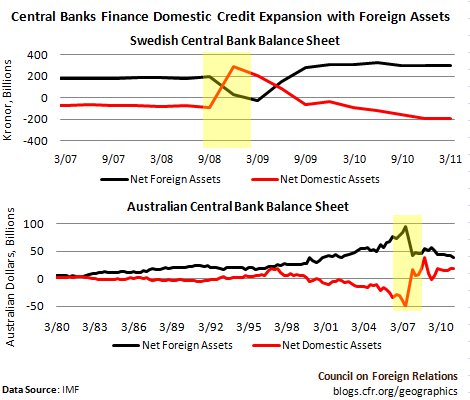 All countries with central banks exercise monetary sovereignty, right?  Nobel economist Paul Krugman certainly thinks so.  “Wow,” he wrote, after reading Benn Steil and Manuel Hinds say otherwise in the Financial Times on May 24, “Have these guys ever talked to anyone in Sweden, which doesn’t need euros to create more kronor?” Fortunately, we have the data, which is better than talk.  Since Mr. Krugman throws Australia into the mix, we will too.  As the figures above illustrate, when the Swedish and Australian central banks expanded credit dramatically during the recent financial crisis their net foreign assets plummeted.  And this is not merely a crisis effect, as the three decades of Australian data show. So it turns out that you do indeed need euros and (American) dollars to create kronor and Australian dollars.  A country that plows on creating credit without them eventually becomes a ward of the IMF.

Steil and Hinds: Keynesians are complacent about the dollar

Steil: Hayek and the Dangers of Monetary Nationalism

Hinds: Playing Monopoly with the Devil

Is the ECB Draining its own Powers?