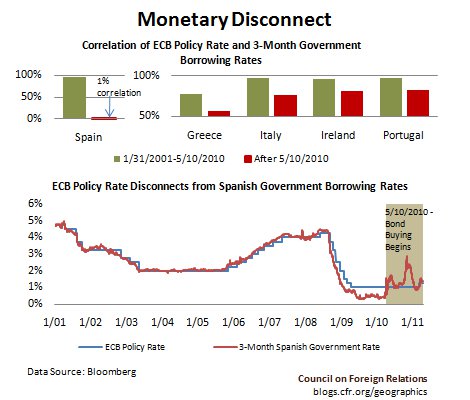 Back in 2000, the European Central Bank’s first president, Wim Duisenberg, explained how he knew the Bank’s operational framework for implementing monetary policy was working well.  It was, he said, successfully “steering short-term market interest rates” where the Bank wanted them to go.  Prior to the financial crisis, that was indeed the case: the ECB’s policy rate was tightly connected to important short-term interest rates, such as the 3-month government borrowing rate.  In a growing swath of the eurozone, however, this is no longer the case.  As the figures above show, the correlation between the ECB’s policy rate and actual government borrowing rates in Spain, Greece, Italy, Ireland, and Portugal has plummeted since the ECB began its debt-buying program.  The market’s view of default risk on eurozone government debt has increasingly come to dominate these rates, which themselves strongly influence borrowing rates in the private sector.  By Duisenberg’s criterion, monetary policy in the eurozone is becoming less and less effective.  The only thing that will reverse this trend is a resolution of Europe’s growing bank and government debt crisis.  Yet by continually insisting that debt restructuring is out of the question, the ECB is only delaying such a resolution - and almost surely making it more costly.

Geo-Graphics: Luck of the Irish Hinges on Banks