That is the crux of the recent debate that I had with Richard Iley, a senior economist at BNP Paribas -- a debate got rather technical, even by the standards of this blog.   But despite some points of agreement – the technical debate did draw out an important difference in how Richard and I view the world.

Richard is impressed by the resilience of US capital flows and the strong recent improvement in the US current account deficit in the absence of a recession; I am more impressed by the fall in private demand for US assets and the resulting increase in US dependence on financing from central banks and sovereign wealth funds.

I tried to reduce everything to a single graph – one that I think explains why the US is turning to the CIC and Abu Dhabi for a little bit of financing ($15b isn’t that large relative to either the US deficit or official asset growth in China and the Gulf) and central banks for a lot more. 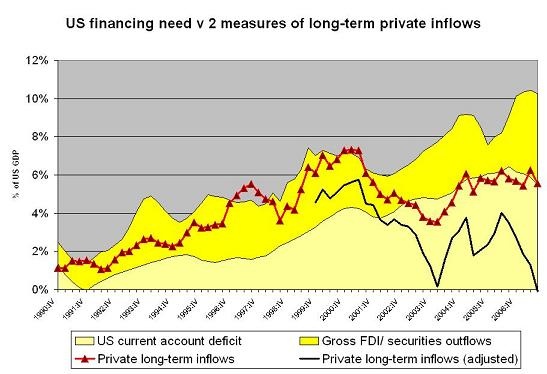 All data is presented as a rolling four quarter sum.
The tan area represents the US current account deficit.   The yellow area represents US purchases of foreign assets – both outward FDI and long-term portfolio flows.   On the assumption (which Richard and I share) that short-term bank flows are not a major source of inflows or outflows, financing, the combined total represents the amount of financing the US needs to attract from the rest of the world.   The red line shows long-term inflows – both FDI and portfolio flows – into the US.   The gap between the red line and the total yellow area has to be filled by either short-term inflows or by central banks and sovereign funds.

In the late 90s and in early 2000 – back when the dollar was strong even in the face of a fairly large US external deficit – long-term private flows matched the US financing need.     That isn’t the case today.

Even if you believe the US data accurately captures real private demand for US assets, the gap between private long-term inflows and the US financing need has gotten bigger, not smaller, over the last year. The increase is US capital outflows has offset the fall in the current account deficit.

The only part of the graph that isn’t straightforward is the blackline.   That is an attempt to estimate “true” private demand for US financial assets.  The black line is substantially lower than the red line – implying that I think the US data understates central bank and sovereign fund inflows and overstates private inflows.   This is for three reasons –

* A Technical note: My estimate for real private demand is obtained by subtracting my estimate for total reserve growth from the sum of private purchases of long-term US assets and total official flows.  The residual assumed to be "true" private demand.

My estimate of “true” private demand for US assets isn’t perfect.   It requires making a lot of assumptions.   But using the US official/ private split requires making an even bigger assumption – namely over the last four quarters, a period when central banks and sovereign wealth funds added around $1,200b to their assets, only $350b made its way to the US …

And by this measure, private flows – true private flows – to the US are as low as they ever have been.   The gap between what the US needs to cover its deficit and its desired investment in the rest of the world (at current exchange rates) and what private investors are wiling to provide is about 10% of US GDP.

That is huge – and it is why every day it seems like a sovereign funds is buying up a little bit more of the US.

Richard argues that the fact that the US deficit has improved even in the absence of a real crisis – whether a fall off in capital flows or a recession – is remarkable.

I view things somewhat differently.   The improvement in the current account deficit reflects what seems to me to be a very real crisis in the credit markets, though one that has taken a very different form than the crisis that Nouriel and I worried about in 2004.

Back then we worried that a collapse in foreign demand for US debt would push up interest rates, triggering a sharp fall in residential investment, a sharp fall in home prices, a credit crunch and a slowdown in US consumption.   A lot of this has happened – though not the fall in consumption -- just in the reverse order.   A fall in home prices and a fall in residential  investment have triggered a credit crisis – and that credit crisis has led to a sharp fall in demand for US debt and a more modest fall in the dollar.   Home buyers gave out before foreign financiers, but the overall result isn’t all that different, though the adjustment hasn’t been as sharp and pronounced as we feared.

Certainly the collapse in demand for US debt from private investors abroad has been sharp.  Consider the quarterly long-term flows data (the gap between the blue line and the green area shows the magnitude of the survey revisions earlier this year): 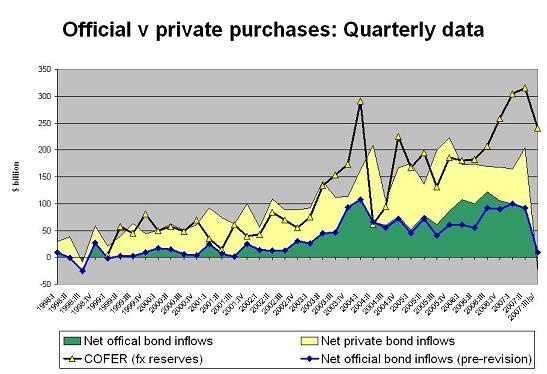 The fall in demand for US corporate debt (especially from the UK) has been especially sharp. 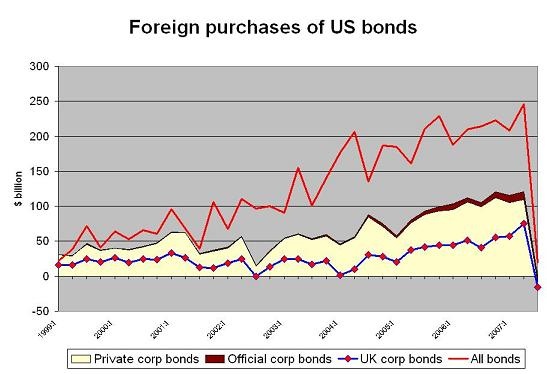 The sharp fall in total bond inflows line from the preceding two graphs is, of course, a reflection of the fall in total inflows to the US in my scary graph.   It is based on the same underlying data.    The higher frequency graph – updated for October – isn’t quite as scary as before, but it doesn’t suggest rude health either. 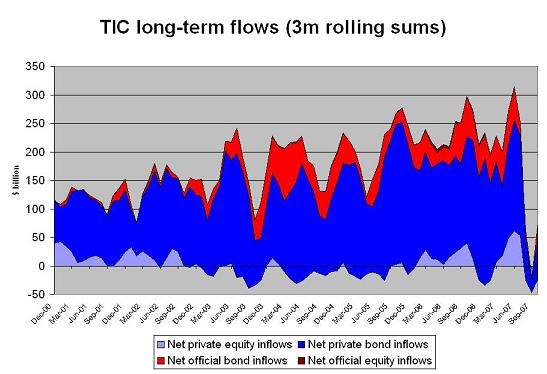 No doubt at some point the US dollar will fall enough (maybe it already did in November?) to induce European investors to buy more US assets - or to induce central banks and sovereign funds who are forced to hold assets offshore and thus must choose between the dollar, euro and pound to opt for even more dollars than they do now.    But putting your assets on sale isn’t exactly an ideal adjustment mechanism.

And I don’t yet see much of evidence of a real pickup in private demand for US assets.  ADIA and the CIC - which have no choice but to buy dollar-denominates assets of some kind -- have been the big investors in US banks (along perhaps with Temasek), not private investors.

The result: enormous growth in central bank reserves, enormous pressure to get higher returns on those reserves, enormous pressure to shift some reserves off the balance sheet of the central bank (China is forcing its state banks to accumulate fx, possibly creating a currency mismatch where none existed before), enormous difficulties sterilizing rapid reserve growth, a rise in inflation in most countries that peg to the dollar and enormous purchases of US assets by state investors.

Setting London aside – and I am still not sure if the UK’s large recorded purchases of US corporate debt (a category that includes “private” mortgage-backed securities) came mostly from central banks covertly seeking yield,  Chinese banks seeking yield on the dollars they are forced to hold, Japanese insurance and pension funds seeking yield,  European banks borrowing short-term dollars in the offshore market and trying to juice up earnings by buying long-term debt or American banks with offshore SIVs selling commercial paper to money market funds looking for yield and using the proceeds to buy longer-term US debt – financial globalization over the last few quarters has reduces to an enormous flow of private capital to the emerging world and an even more enormous official outflow from the emerging world.

I wouldn’t characterize this as a healthy global system – even if it perhaps can be sustained for a while longer.

Private investors want to finance deficits in countries that don’t want to run deficits.   The countries now accumulating reserves the fastest have the least need for reserves.   The country with the largest deficit is struggling to attract enough private inflows to match the increased desire of its private sector to buy foreign assets – let alone both the deficit and those outflows.   And the country with the strongest traditional aversion to state-ownership is now the country most-reliant on government inflows.

How quickly the world changes