WINNEFELD: Then there are the highly insecure authoritarian states, such as Iran, North Korea, and of course, Syria, including those who murder their own people on a large scale and those who have concluded that obtaining deliverable nuclear weapons are the best insurance policy for their regime.

Foreign military sales represent the largest percentage of DSCA funds, with $69.1 billion in fiscal 2012, Gilman said, “but $29 billion of that is from the sale of 84 F-15s to Saudi Arabia, along with weapons and training and basing.” He said that going forward, the agency expects about $30 billion a year, with about $25 billion in 2013 sales.

Q: You believe the U.S. has a "special role" in the world, to "enforce the peace it seeks." How does that relate to the sequester?

A: The sequester is doing a lot of damage to national security — the readiness of our troops, our men and women in uniform not getting the training they have in the past. Eventually that translates into lives lost. It happened when we entered World War II. Our people weren’t sufficiently prepared, and moving across North Africa, they were like cannon fodder. Korea — we were almost pushed into the ocean before we were able to gear back up, because after every war, we tend to cut back our military.

Q: Shouldn’t we cut back military spending after wars?

A: Yes, but not to the point where we weaken ourselves to invite further aggression. People said we should listen to Eisenhower and beware the military/industrial complex. Eisenhower also said we should always be so strong that nobody dares take us on for fear of annihilation. Ronald Reagan talked about peace through strength. When you cut back to the point where you’re not able to protect yourself and your allies, they have to start creating other alliances.

An ambassador from the Mideast just walked out of here [his office]. He was very concerned. He said when you draw a red line and don’t follow through, then your friends suffer, and I have to agree.

Air Force Special Operations Command wants to pack up an MQ-9 Reaper in less than eight hours, fly it anywhere in the world aboard a C-17, and then unpack it and have it ready to fly in another eight hours…

Q:…Do you agree, Admiral, that it would be inaccurate to say that the four-man team was told to stand down?

A: Yes, they are not told to stand down.

Q: …Mr. Hicks also testified that he was frustrated that a fast-mover, such as an F-16, could not have been sent to Benghazi to either engage militarily or do fast flyovers to perhaps scare adversaries. Obviously I think we’re all sympathetic with that. I think both sides of the committee certainly understood that we wanted jets there yesterday, I think as our ranking member said. Admiral Mullen, as part of the ARB, did you investigate whether the military could have sent fast-mover assets, such as F-16s, to Benghazi on the night of the attack? And, if so, what did you conclude?

A: We did investigate that. And consistent with what I said previously, it was not realistic to think that we could task fast movers, jets, notionally in Aviano, Italy, 2 to 3 hours’ flying time away, without tankers, which were a minimum of 4 hours away in the middle of the night with no previous tasking…The physics of it, the reality of it, it just wasn’t going to happen for 12 to 20 hours. And I validated that in my review when I went to the Pentagon to look at every single asset that was postured in theater, including those jets in Aviano.

Q: At a hearing on February 7th, 2013, before the Senate Armed Services Committee, General Martin Dempsey, the current Chairman of the Joint Chiefs of Staff, was asked whether we could have deployed F-16s from Aviano Air Base in Italy…Admiral Mullen, do you agree with General Dempsey’s explanation that there was simply not enough time to deploy those assets?

A: There was not enough time to deploy the assets, to provide the refueling they would have needed probably twice en route, given once while they are going, and if they’re going to have any on-station time, twice, those assets, those refueling assets were further out of reach than the jets in Italy -- meaning in Aviano specifically. So it just wasn’t realistic. The line of questioning and approach here, for those of us in the military, that we would consider for a second not doing everything we possibly could, it just -- it stirs us to our bones, because that’s who we are. We don’t leave anybody behind. We do support them under all circumstances. That night, middle of the night, it just wasn’t -- for those assets that may have been able to get there in someone’s view, it just wasn’t very realistic. What is also unsaid in this is for those kinds of assets, the significant, though administrative issue of asking a country like Libya to come into their air space with combat forces. And those are decisions that have to be made. Obviously, if we had assets available. And the significance of either that being granted or not granted or the ability to even have it granted that night with everything else that was going on in Libya…

Q: …Admiral Mullen, Secretary Gates said that one reason he would not have approved sending an aircraft to Benghazi on the night of the attacks was due to a potential threat from surface-to-air missiles that may have disappeared from Colonel Qadhafi’s arsenal. Do you agree that that could be a possible reason why you wouldn’t want to send an asset over Benghazi?

A: If I were to send an asset over Benghazi I’d want to know what the threat is. I -- from a standpoint of in particular this is focused -- at least from my perspective it’s been focused on the second attack, which the event that -- the mortar attack which killed two great Americans, Mr. Doherty and Mr. Wood. The reality is the likelihood at 2:00 in the morning or at 5:00 in the morning in the middle of the night under the cover of darkness, the likelihood that we could have had any effect on very accurate mortar fire set up in a very short period of time for -- to be able to deter or take that out is from my perspective near zero. So I think Secretary Gates’ comment about the whole idea, and I think Secretary Panetta said the same thing another way, which is trying to understand the threat base which is what we always do when we send people in. That doesn’t imply from my perspective that we would have to wait. It’s just you need to understand it. And you need to understand the risks. And there are risks where from my perspective I would -- when I was in a position of responsibility I would have taken the risk to send somebody in when there was a surface to air threat I thought I might be able to mitigate and there are times when I wouldn’t.

Q: …Admiral, do you agree with Secretary Gates that sending in Special Forces would have been very difficult and risky without knowing much more about the threat conditions?

A: I agree completely with what he said.

Q: Do you care to elaborate further on that?

A: I think what caught me in his statement there that I think is really important is his comment on "cartoonish." As if it’s almost like a PowerPoint slide, you can go from a situation that is very calm to all of a sudden they’re all there. There’s an extraordinary amount of work that goes into planning and preparation and understanding what you’re doing. And going into very risky environments. Not that they wouldn’t do that. But that you can somehow do that instantly when you really are completely surprised, that you could generate a force to have that kind of impact is -- it’s just not reasonable. And it’s not my experience in some pretty difficult circumstances over the last several years in two wars plus the war against al Qaeda. 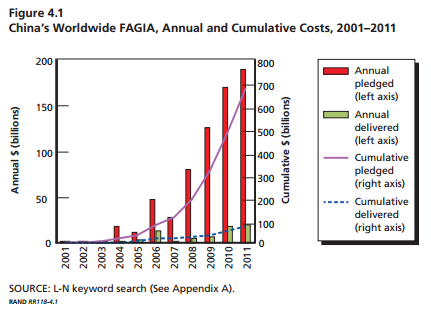 (3PA: China only delivers a fraction of foreign aid that it pledges.)

You Might Have Missed: Syria, Drones, Gender Citation Gap