SEC. HAGEL: A lot of questions always come with any possibility or decision whether to take strikes or not. So those are all questions that are being asked and factors are being—are put into the process. And those are still options.

Q: But what sorts of questions do you mean?

(3PA: Last week, I pointed out that while numerous U.S. officials have called for air strikes, these demands have not been matched by a clear justification or articulation of what they are intended to achieve.)

The longest operation began in December 2008 and lasted 22 days, ending in a cease-fire and the deaths of at least 1,166 Palestinians and 13 Israelis, according to the Israeli human-rights group B’Tselem and the Israeli Foreign Ministry. A weeklong fight in 2012 left 167 Palestinians and six Israelis dead. 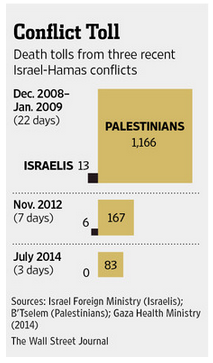 (3PA: Since this article was published, an additional 18 Palestinians were reportedly killed. Therefore, only have 1,434 Palestinians and 19 Israelis have been killed since the Israeli-Gaza wars in 2008, but in the last two Israeli military operations, 55 percent and 52 percent of Palestinians killed were non-combatants.)

So it is clearly in our interest—when I talk about protecting American lives in America, I also said protecting our interests. And ISIL may not appear to be an imminent threat to the United States. It is a threat to the United States. It is a threat, a clear threat to our partners in that area, and it is imminent. And I think you look further in that—in that area in the Middle East to see what’s going on, in Syria, in Lebanon, what’s going on in Israel today, the Gaza Strip, Libya, Egypt, there—there is hardly a stable country in that—in that area of the Middle East.

The possibility comes as part of the U.S. military effort to gather intelligence on so-called "high value targets" in Iraq and continues to collect intelligence for targeting airstrikes in Iraq. The targets fall into three categories, the officials said. They include information for striking "high value targets" like al-Baghdadi; protection of key infrastructure such as the Haditha Dam; and blunting major ISIS offensives against Baghdad. Airstrikes by either drones or manned aircraft would have to be approved by the President.

(3PA: Last week, I pointed out that while numerous U.S. officials have called for the deployment of drones, these demands have not been accompanied by justifications, and there is still no precise goal for the deployment.)

In peace time, the Navy fires around 100 a year for testing, though when conflicts arise that number shoots up quickly: almost 300 Tomahawks were fired during the Gulf War in 1991, and more than 150 during the 12-day campaign to oust Libyan leader Moammar Gadhafi’s government in 2011. All told, 2,300 have been fired in combat. 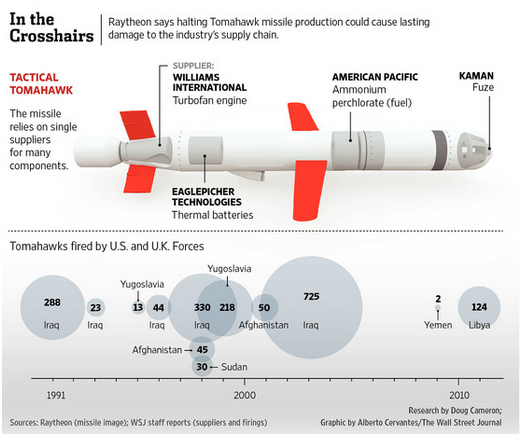 Targeted killings accounted for nine per cent of all civilian casualties. Between 1 January and 30 June 2014, UNAMA documented 428 civilian casualties (263 civilian deaths and 165 injured) from targeted and wilful killings (or attempts to kill), a 10 per cent decrease from the same period in 2013.

In the Zagros Mountains of Iraqi Kurdistan, a Kurdish terrorist organization—Ansar al-Islamwas running a training camp near the village of Khurmal, where it was reportedly producing cyanide gas, toxic poisons, and ricin for terrorist attacks by its afﬁliated cells in Britain, Germany, France, and Italy.2 The US military developed a combined air-ground operations option that anticipated striking the camp on 4 July 2002. That option was unanimously supported by the Joint Chiefs of Staff and proposed to the White House. According to General Richard Myers, Chairman of the Joint Chiefs, the planned operation to destroy Khurmal ‘would have been challenging, but doable’.3 General John Keane, the US Army’s representative on the Joint Chiefs, recalled the proposed option as ‘very doable from a military perspective’.4 If there ever was a clear instance for the Bush administration to execute its post-9/11 national security policy, this was it. Yet, despite the alleged threat from Ansar al-Islam, and a reliable option to use preemptive force to defeat it, President Bush chose not to utilize limited force…(p. 616)

Although largely overlooked or forgotten, the Bush administration’s claims in 2002 that WMD were being produced at Khurmal turned out to be highly accurate. An American sensitive-site exploitation team deployed to Khurmal uncovered chemical hazard suits, atropine injectors, and Arabic-language manuals on how to make chemical munitions. Tests also revealed traces of cyanide salts, ricin, and potassium chloride, all deadly toxins.107 An investigative report by the Los Angeles Times, which both examined documents and computer ﬁles seized at Khurmal and was informed by interviews with US and Kurdish intelligence operatives, found no evidence that Ansar al-Islam was connected to Hussein’s regime, but was able to prove that the group ‘was partly funded and armed from abroad; was experimenting with chemicals, including toxic agents and a cyanide-based body lotion; and had international aspirations.’ (p. 640)

(3PA: It’s been reported that Islamic State of Iraq and Syria (ISIS) fighters located two suspected sites related to Saddam Hussein’s WMD program—one containing 40 kilograms of uranium, and another former chemical weapons complex, potentially containing mustard gas and sarin. Some analysts believe this is evidence of WMDs existing in Iraq before the invasion in March 2003. However, as I detailed in the case study on the decision not to bomb the Ansar al-Islam camp in Khurmal, there was an additional site where WMD-like toxins and poisons were being developed.)

Primarily, [Stephen] Sloan explains, more rigorous passport controls coupled with intelligence information on suspected terrorists is needed. “What do you have to do to get a passport?” Sloan asks. “You pay your two dollars and send your picture into a travel agency and you get a passport. Well, dammit, Atila the Hun could get a passport!”…

And the role of media needs to be addressed, he says. Electronic communications make it possible for a small band of terrorists to demand “instant global publicity” for their causes.

On this point, the study group recently held a seminar for Oklahoma newsmen and state and federal officials on how to work together when terrorism strikes.

“Terrorism is traditionally the weapon of the weak,” he adds. “And it’s extremely cost effective in a modern technological age. For instance, it’s one thing for a band of insurgents to knock off a rural official, but it’s quite another when a small group can knock out the electronic grid of a large modern city.”