For five years after the onset of the Greek debt crisis in 2010, the greatest threat to European integration came from abrupt movements of capital. Now there is a different threat: abrupt movements of people. On September 14, the interior and justice ministers of the European Union meet for an emergency summit on migration. As with the currency-crisis meetings of the past five years, the outcome could either strengthen Europe’s bonds or, alternatively, fray them.

More From Our Experts
Robert D. Blackwill
Policy Prescriptions for U.S.-China Relations
Liana Fix
Why European Democracies Are More Resilient Than Expected
Stephen Sestanovich
Who Are Russia’s War Hawks, and Do They Matter?

The twenty-eight countries of the European Union are facing the biggest wave of disorderly migration since World War II. The UN High Commissioner on Refugees reports that more than 320,000 people have crossed the Mediterranean since the start of this year, a rate roughly twice as high as during 2014 and eight times as high as in 2013. Many come from Syria, Iraq, Afghanistan, and Sudan, and are therefore escaping war: These are not, for the most part, economic migrants. Meanwhile, more people cross into the EU by land, although the numbers are uncertain. 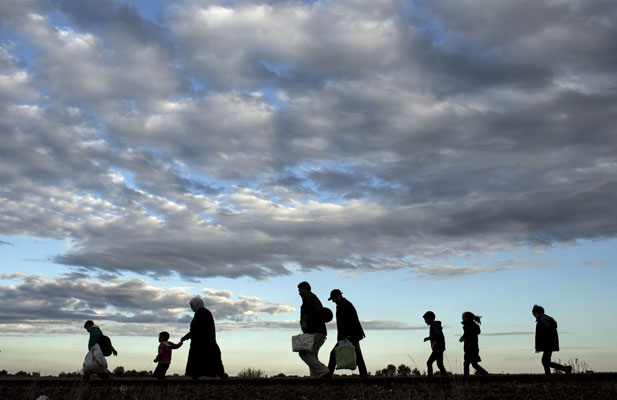 Migrants walk along rail tracks as they arrive to a collection point in the village of Roszke, Hungary, after crossing the border from Serbia. (Photo: Marko Djurica/Reuters)

Europe’s response to this challenge has been divided. On the one hand, the humanitarian case for generosity is self-evident. Almost three thousand would-be migrants have drowned so far this year on the Mediterranean crossing, underlining the desperate circumstances that drove them to risk the journey. They die in precarious rubber vessels; they are trampled in overstuffed ship holds; they are asphyxiated in trucks abandoned on the roadside. Last week, a poignant photograph of a drowned boy went viral: The image of the neatly dressed three-year old washed up on a Turkish beach triggered a fresh surge of anguish. At Munich’s central train station, an arrival point for refugees crossing through the Balkans, the spontaneous outpouring of sympathy has been so overwhelming that police have turned away donations of food: There were more than could be handled.

But Europeans also feel defensive. Much as in the United States, migrants are accused of burdening schools, hospitals, and other public services; they are said to pose a threat to traditional European cultures. Even as the Munich train station has become the symbol of German generosity, arson attacks on migrant hostels by gangs belonging to Germany’s extreme right illustrate the darker underbelly of the national response. Such attacks have been running at more than one per day in the first half of 2015, according to German police statistics.

As with Europe’s currency crisis, the divisions pit EU member states against one another. Despite the actions of its extreme right, Germany has emerged as the leader of an activist faction that wants to respond generously; it promises to process 800,000 asylum applications this year, including many from petitioners in camps outside the EU, and it tops the EU in the number of asylum petitions accepted. In a recent opinion survey, 88 percent of Germans said they were ready to help the refugees, or were already helping; the only anti-immigration political party, the Alternative for Germany, languishes at around 4 percent in the polls. Just as Germany’s memory of hyper-inflation informs its austere approach to economic policy, so history may color attitudes to migrants, too. At the end of World War II, millions of Germans and other Europeans were displaced. The Holocaust has created a remorseful sense of obligation toward vulnerable peoples.

More From Our Experts
Robert D. Blackwill
Policy Prescriptions for U.S.-China Relations
Liana Fix
Why European Democracies Are More Resilient Than Expected
Stephen Sestanovich
Who Are Russia’s War Hawks, and Do They Matter?

All suspect that Germany’s generous instincts act as a magnet for further waves of migrants—who will use the front-line countries as transit routes.

If Germany is the leader of the generous faction, Sweden is the model. It comes second in asylum grants and first when the numbers are adjusted by the host country’s population. In recent days, Germany has also managed to recruit France as an ally, and Italy is sympathetic, too. With Western European heavyweights in favor of generosity, some waverers seem ready to join the bandwagon.

But other countries remain resistant. Viktor Orban, Hungary’s authoritarian leader, once said he understood the demographic challenge posed by Hungary’s population decline, adding that he ruled out two kinds of remedy—cloning and immigration. Orban now promises to cut off the flow of migrants from the east by extending a razor-wire fence on Hungary’s border with Serbia. Other eastern and southern members of the EU, finding themselves on the front lines of the refugee crisis, share Hungary’s instincts. Bulgaria is also building a border fence to keep out migrants. Slovakia’s leader has said he would accept only non-Muslim refugees. And the same sentiment is heard in Poland. All suspect that Germany’s generous instincts act as a magnet for further waves of migrants—who will use the front-line countries as transit routes.

The UK’s response has scarcely been more edifying. Spooked by the rise of the anti-immigrant UK Independence Party, the Conservative prime minister, David Cameron, has complained of “swarms” of migrants threatening to “break into Britain.” In a widely anticipated speech on September 7, Cameron nodded to public anguish over the refugees’ suffering by committing his government to granting up to twenty thousand asylum petitions by 2020; the implied acceptance rate of fourth thousand per year is a drop in the ocean. The UK has an honorable tradition of taking in persecuted peoples, from the French Huguenots of the seventeenth century to the Central European Jews of the mid-twentieth century; as recently as 1972, Prime Minister Edward Heath granted asylum to Ugandans of Indian descent, who were expelled by Idi Amin’s dictatorship. Now, apparently, British generosity has been exhausted.

In the lead up to the September 14 summit, Germany has demanded a new EU-wide system for processing and accepting migrants. The European Commission is proposing that EU member states collectively commit to accepting 160,000 refugees, with the numbers shared among the member states according to a quota system reflecting population and economic solidity. This joint approach is only logical: Given an orderly and coordinated European response, the migrant challenge could be absorbed fairly straightforwardly. After all, an influx of even one million refugees would represent just 0.2 percent of the European Union’s population. In contrast, the number of undocumented immigrants in the United States is estimated at around eleven million, or 3.5 percent of the population. In Lebanon, Syrian refugees account for one in five people.

If Europe’s external borders are porous, will EU member states stick by their commitment to free movement within the bloc?

Yet although a joint European response to the immigration challenge is desirable, the trouble is that on this issue, as on many other policy challenges, Europe’s member states have repeatedly resisted transferring power to Brussels. The UK’s position is the most simple and extreme: it has always refused to be part of the Schengen agreement, which permits passport-free movement across borders; and it now cites that stance as a reason to stay out of any joint policy on political asylum. But even Schengen members have balked at a common stand. Back in May, the European Commission proposed a joint resettlement plan based on a similar system of mandatory quotas adding up to twenty thousand grants of asylum. But the EU member states rejected the proposal. Central and eastern EU members led the opposition, with Spain supporting them.

The tortuous refugee debate is likely to affect the UK’s future in Europe, on which David Cameron’s government has promised a referendum. Cameron knows he needs to demonstrate some solidarity with Germany if he wishes to win concessions on the terms of the UK’s EU membership—enabling him to claim to voters that he has fixed the things that they resent about alleged meddling from Brussels. Hence his recent promise of a slight increase in openness to refugees, coupled with a pledge of generous aid for refugee camps in Turkey and Jordan.  At the same time, however, Cameron cannot risk offering Germany too much, for in doing so he may appear to vindicate voter complaints of loss of sovereignty and play into the hands of the “out” faction in the referendum. To make matters trickier, the prime minister has been ordered by the UK Electoral Commission to drop a plan to use the government’s communication channels to advocate staying in the European Union.

Europe’s refugee crisis is liable to continue for the foreseeable future. In Syria alone, fully four million people have fled the country, and an additional seven million are internally displaced; so far, only a fraction of this potential tide has crashed on Europe’s beaches. If the European Union cannot come up with a joint response to the challenge, awkward questions will be raised. If Europe’s external borders are porous, will EU member states stick by their commitment to free movement within the bloc? And if the tide of incoming migrants is chaotically managed, will Europe’s voters suffer a further loss of enthusiasm for the project of a united Europe?

China’s colossal infrastructure investments may usher in a new era of trade and growth for economies in Asia and beyond. But skeptics worry that China is laying a debt trap for borrowing governments.