Nigeria has benefited from an oil boom since the end of military rule in 1999. Prices rose from $10 per barrel that year to $140 per barrel in 2008. As late as June 2014, they remained above $100. However, since June oil prices have fallen by more than 30 percent. It is unlikely that they have reached bottom. The Organization of Petroleum Exporting Countries (OPEC) has declined to mandate a cut in production. It would seem that only a major cut in production, probably led by Saudi Arabia, could cause oil prices to recover to the $100 per barrel level.

This plunge in prices is generating alarm in a number of oil-dependent states, none more so than Nigeria. Despite nominally high growth in the non-petroleum sectors, Nigeria remains a petro-state. More than 90 percent of the profits from the petroleum industry go to the Nigerian government. Petroleum accounts for up to 80 percent of all government revenue (government revenue was an estimated $20.7 billion in 2014) and more than 90 percent of the country’s exports. 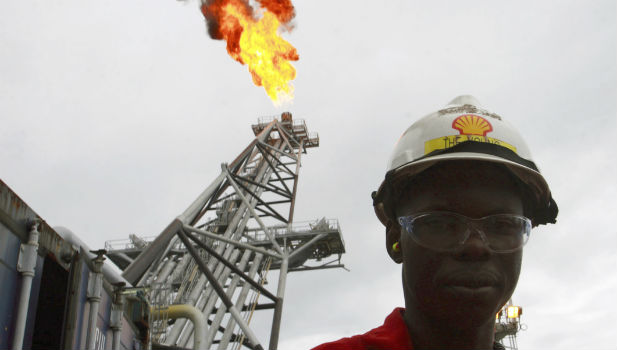 An oil worker stands on the deck of a tanker at Bonga off-shore oil field outside Lagos. (Photo: Akintunde Akinleye/Courtesy Reuters)

That dependency is now stirring serious concern throughout the country’s political class. Among other things, a whole array of government expenditures associated with petroleum play a major role in sustaining the cooperating and competing patronage networks that run Nigeria. Absent this political lubricant, the country’s already unstable political situation promises to get worse just two months ahead of national elections.

With by far the largest population in Africa, 177 million, Nigeria is also the continent’s largest economy. It is the political and economic hegemon of West Africa. Its economic and political challenges have consequences outside its borders. Already there are hundreds of thousands—some estimates exceed one million—of internally displaced persons within its borders, and there are Nigerian refugee flows into Cameroon and Niger associated with the Boko Haram insurgency. In a region still reeling from the economic consequences of Ebola, Nigeria’s tremors can be felt throughout West Africa .

The Nigerian federal budget is based on a conservative estimate of the world price of oil. The federal government distributes oil revenue by a set formula to the states and to local government authorities, which are mostly dependent on it because they can raise little through local taxes on their own impoverished and under-developed local economies. (Lagos state is the exception, in part because it is the heart of Nigeria’s modern economy.) “Bunkered,” or stolen, oil may amount to 10 percent of total production.

Oil production may also be falling. It is estimated that Nigeria could produce 2.5 million barrels of oil per day, however actual production seems closer to 1.9 million barrels, reflecting low investment in the industry and political uncertainty. A petroleum industry bill that would redefine the relationship between the government and the oil companies remains in limbo. In addition, the major international oil companies have been cutting back their operations in Nigeria for a variety of market, political, and security concerns.

"The bottom line is that the Nigerian government’s revenue is falling, which means it has less money with which to manage political problems."

The market for Nigeria’s oil is also shifting. Over the past decade, about half of Nigeria’s petroleum production went to the United States. However, the United States imports of Nigerian oil are negligible due to the increase in its own production associated with hydraulic fracturing and the greater availability of oil closer to home. Conventional wisdom, often articulated by Petroleum Minister and newly elected President of OPEC Diezani Allison-Madueke, is that Nigeria’s production will find other markets, especially in Asia. However, there will be a time lag caused by the need for new customers to meet new requirements, such as revamping or expanding their refining capacities to accommodate Nigeria’s Bonny Light crude oil.

In response to falling government revenue, the administration of President Goodluck Jonathan has recalculated its budget twice from an initial estimate of $78 a barrel to $65 a barrel. (On December 10, 2014, Bonny Light crude had fallen to $61 a barrel.)

With the fall in oil prices the naira, Nigeria’s national currency, has fallen dramatically, eroding foreign reserves. In response, the Nigerian government has devaluated the naira by 8 percent. The government’s new target range for the naira is 160 to 175 to the U.S. dollar. However, the naira remains under siege. According to Reuters, it closed on December 10 at 180 to the U.S. dollar.

The bottom line is that the Nigerian government’s revenue is falling, which means it has less money with which to manage political problems. Finance Minister Ngozi Okonjo-Iweala is calling for austerity, and Godwin Emefiele, the governor of the Central Bank, has raised the possibility of cutting the highly popular subsidy on public consumption of fuel. A 2012 effort to end the subsidy provoked a serious crisis and forced the government to back down. In the end, the subsidy was cut by about 50 percent, but the government was shaken.

The decline in government revenue comes at a time of general political instability, and will likely make it worse. Boko Haram, the radical Islamist insurgency in northeast Nigeria, continues to expand. Last week, there were attacks in Gombe state, outside of the group’s usual areas of operation. At President Jonthan’s request, in November 2014 the National Assembly authorized him to borrow $1 billion for the struggle against Boko Haram.

Boko Haram now occupies territory estimated to be as large as the state of Maryland, and has free range over a larger area. In some areas both secular and religious authority has broken down. In large swaths of northeast Nigeria there has been no planting or harvesting, raising the specter of hunger in the coming months. Nobody knows how many have died in the war between the Boko Haram and the Nigerian government. CFR’s Nigeria Security Tracker estimates that as of November 2014, deaths related to the Boko Haram insurgency and the government’s response to it topped twenty thousand. Kidnapping and hostage taking have now become commonplace, with the notorious Chibok schoolgirl kidnapping in April 2014 unique only because of the number of victims.

Meanwhile, the performance of the army and the security services continues to be dismal and marked by human rights abuses. Amid the oil slump, there will likely be less money available to revamp them.

In general, public confidence in the federal government appears to be low, making it unlikely that there will be willing acceptance of an austerity policy. However it is hard to see how the Jonathan administration can avoid one.

National elections are scheduled for February 14, 2015. Elections are the occasion and the venue for competition, often violent, among Nigeria’s fractured political elites. In the past, abundant oil money provided a means to resolve numerous conflicts, to literally “grease the skids.” Now, there is less money available.

Beyond Boko Haram and the elections, falling oil prices poses a new challenge to the patronage networks that run Nigeria because for the first time since 1999, government revenues are shrinking and the naira is falling. Should the government pursue policies of austerity, there could be a sharp public reaction. An effort to do away with the fuel subsidy could provoke popular unrest in Lagos, which has been relatively free of political or sectarian violence.

In the short term, the government could continue to draw down its sovereign wealth fund (established with oil profits during the fat years), but that account would be quickly exhausted. It could also approach international financial institutions for help, though it would be reluctant to do so because of the likely requirements they would impose.

The confluence of declining oil prices and government revenue, a failing effort against Boko Haram, and contentious national elections in two months is making it harder for Nigeria to pull back from the brink.

Sultan of Sokoto Responds to Sowore's Imprisonment in Nigeria

Buhari's Dictatorial Past and the Rule of Law Today in Nigeria