Skip to main content
Is China Serious About Pollution Controls?

China is one of the world’s biggest polluters. Yet there are signs change may be underway as the government faces mounting public pressure over environmental degradation.

Despite recent news that China has underreported its coal consumption, 2015 has been a potentially transformative year for environmental protection. Under the Dome, a TED Talk-style documentary investigating China’s air pollution and its impact on health, went viral in March, receiving about 200 million views on Chinese websites.  As if in response to this public interest, in April the Party Center—the Chinese Communist Party’s Central Committee—restated its plan to implement “ecological civilization reforms,” something it had stressed at the Third Plenary Session of the 18th CCP Central Committee in 2013. In August the Standing Committee of the National People’s Congress (China’s legislature) approved major amendments to the Air Pollution Prevention and Control Law, marking the law’s most significant overhaul since its enactment in 1988.

Such moves show seriousness on the part of top Chinese leaders about environmental protection, but bringing about actual change remains a challenge to the public policy-making process. 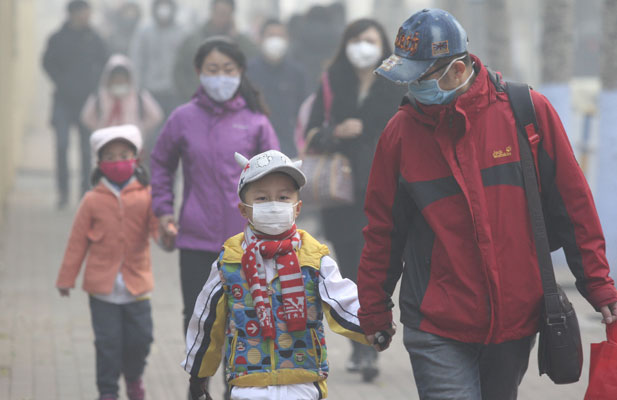 Students and their parents wearing masks walk along a street on a hazy day in Harbin. (Photo: Reuters)

The government has a new set of policy tools at its disposal for implementing pollution controls, including an accountability system known as environmental supervision talks (EST), public-private partnerships, tradable pollution rights, and public interest litigation. Each carries the hope for bold changes but they also face serious challenges to meaningfully reducing pollution.

-Environmental supervision talks: The system of supervision talks (yuetan) was first introduced in 2007 in China.  Environmental supervision talks are dialogues conducted between officials of the Ministry of Environmental Protection (MEP) and its six regional supervision centers (RSC), on one side, and local officials, on the other. Since the end of 2014, the MEP has held talks in more than twenty cities in regions where major concerns over policy implementation have been raised. These talks are not just hot air: when ministry officials raise concerns, local officials are asked to respond and meet explicit requirements and deadlines. In localities under the jurisdiction of the northern China RSC, for example, fifty-seven local officials were disciplined after authorities found they were not in compliance with environmental regulations. The EST also led to the suspension of operations for fifty-seven major polluters in the city of Linyi in eastern Shandong province.

Chinese state media have reported improvements in air quality in the cities whose mayors participated in [environmental supervision] talks.

While systematic data is not yet available, Chinese state media have reported improvements in air quality in at least some of those cities whose mayors participated in the talks. Unlike previous yuetan practices, post-2014 ESTs summon local heads of government (rather than only their associates) and encourage media coverage. The publicity of the talks produces pressure on local officials to produce results; this is especially true given new CCP rules that hold party and government leaders principally responsible for ecological conditions and environmental protection.

-Public-Private Partnerships: Given the scale of China’s pollution problems, huge investments are needed to clean up air, water, and soil pollution. It is estimated that during the 13th Five-Year Plan (2016–2020), at least $946 billion will be required to invest in environmental protection. According to a senior MEP official, total investment could reach $2.68 trillion. However, as China’s economic growth slows, the government has found it difficult to sustain such high levels of public financing. A document issued in October 2014 by the State Council, China’s executive body, imposed additional constraints on local governments’ ability to issue debt for public financing, exacerbating budgetary concerns. The document’s release was followed by top-down efforts to promote public-private partnerships (PPP)—long-term, renewable contracts between private entities and government agencies in which the former provides a public asset or service, bearing significant risk and management responsibility. In April 2015, the State Council adopted draft Administrative Measures on Concession of Infrastructure and Public Utilities Projects. Among the more than one thousand PPP projects unveiled by the National Development and Reform Commission, a third are related to environmental protection, with investments amounting to $26.8 billion.

-Tradable pollution rights: As early as 2002, China began to emulate U.S. market-based pollution control measures, introducing a pilot system of fees and tradable permits for industrial polluters. This was in part driven by the recognition that command-and-control measures (e.g., imposing charges after pollution occurs) do not incentivize industrial firms to protect the environment. To date, China has set up more than twenty local trading platforms that allow companies to buy and sell rights to emit pollutants like sulphur dioxide and nitrogen oxide, major contributors to smog. The system constitutes two markets. In the primary market, industrial firms are required to pay for pollution rights through auction or government-directed quotas; firms can then trade permits in the secondary market. The pollution-rights trading scheme received a new boost in September 2015, when Beijing’s reform plan emphasized using market mechanisms to address the country’s environmental problems.

-Environmental Public Interest Litigation: There is a growing interest in using environmental public interest litigation (EPIL) to raise awareness and compel firms to comply with environmental laws. In 1998, two professors at China University of Political Science and Law cofounded the Center for Legal Assistance to Pollution Victims, which has since brought numerous cases seeking redress on the behalf of pollution victims. A series of developments in 2015 created more space for public participation in China’s environmental protection. The new Environmental Protection Law, which came into force in January, granted around seven hundred NGOs the right to initiate EPIL cases. In July, the Standing Committee of the National People’s Congress authorized the Supreme People’s Procuratorate, the country’s legal supervisory organ, to launch pilot EPIL programs to target areas of ecological environment, resource protection, land transfers, and food safety. These new programs are expected to increase the number of EPIL cases significantly.

These new policy measures risk being undermined by a decentralized and crisscrossing policy structure. For instance, the MEP does not have primary say over personnel appointments and payroll expenditures of local environmental bureaus, limiting its power to inspecting, investigating, and advising local governments when violations of environmental laws occur. In practice, the MEP and its regional supervision centers also duplicate enforcement and inspection responsibilities of local environment protection bureaus. Mayors who participate in the EST may vent frustration on local environment protection officials, who in turn become scapegoats. For example, of the seven city government officials disciplined after the EST in Zhumadian, in southern Henan province, four were environmental protection officials.

In the case of public-private partnerships, an underdeveloped market society and a weak environmental regulation regime also restrict the effective use of PPPs in environmental protection. Not only do PPP contract violations remain common, but private entities are often in a weak position to deal with government actors due to an absence of laws and regulations to ensure equal status in consultation and negotiation processes. In fact, institutional insufficiencies have only emboldened excessive government interference in PPP-related project setting, assessment, and decision-making. Though there is government interference in the way PPP projects are developed, in other areas government intervention remains purposely absent. Many local governments still only view PPPs as a financing tool and overlook the private sector’s potential role as long-term, responsible partners.

Few environmental NGOs in China have the will and capacity to initiate public interest litigations.

Similar factors account for the limited progress in pollution-rights trading. As early as 2008, the municipalities of Beijing, Shanghai, and Tianjin set up permit-trading platforms. The former two have yet to see a single trade. The platform in Tianjin did function once, when a company won permits to emit fifty tons of sulphur dioxide. Firms do not have strong incentives to go to the trading platforms in part because of the lax enforcement of environmental laws: it makes no sense to seek permits if the firms can discharge pollutants without the risk of being caught. The existing regulatory framework also allows a majority of local industrial firms to obtain pollution-rights quota for no cost as long as they pass environment impact assessments, which reduces the need to buy pollution permits from the secondary market. The incentives for relying on market forces are further curtailed by the absence of a standardized, nationwide, price-setting regime for polluting rights. Most companies received pollution rights through deals imposed on them by the government, rather than through market mechanisms.

While state-market relations constrain the implementation of PPP projects and pollution-rights trading, state-society relations hinder EPIL lawsuits. Between 2000 and 2013, there were no more than sixty EPIL lawsuits, and in the first half of 2015, courts accepted only ten such cases. Most of the lawsuits were initiated by government departments and local procuratorates, while few were launched by environmental NGOs. Only four NGOs lodged EPIL suits between 2007 and 2013. Public interest litigations initiated by procuratorates do not resolve challenges of social participation and monitoring because those cases must be approved by the Supreme People’s Procuratorate. The approval process is lengthy and the case may ultimately be rejected.

Furthermore, few environmental NGOs in China have the will and capacity to initiate public interest litigations. Unlike another large emerging country, India, environmental NGOs in China tend to be small and lack the means to specialize in both environment and law, not to mention defray high litigation costs. The reluctance of local governments and enterprises to disclose information on the environment only increases the cost of investigation and evidence collection, which is often used as the basis for deciding whether a case is prosecuted. In addition, local governments, motivated by the need to sustain economic growth and reduce unemployment, often choose to turn a blind eye to local firms’ pollution behavior. It is extremely difficult to win an EPIL case against major local taxpayers unless the latter have committed other, more serious crimes.

Chinese leaders convened for the Fifth Plenary Session of the 18th CCP Central Committee in Beijing in early November 2015 to hammer out an economic blueprint for the next five years. The meeting highlighted five central themes for development including recognition of environmental factors and openness. These themes have also been reflected in the pursuit of new policy instruments in environmental protection in recent years. However, their utility will remain limited unless the government is committed to upgrading its toolbox, which would require fundamental changes in state-market relations, bureaucratic power structure, and state-society relations. For the moment, there are few signs of the commitment needed to bring these changes about.