On May 14, President Barack Obama will host at Camp David the leaders of Saudi Arabia, Kuwait, the United Arab Emirates (UAE), Qatar, Oman, and Bahrain. It is a mission to reassure allies concerned about the U.S. commitment to the Gulf region and its determination to forestall an Iranian nuclear bomb. It is also a mission destined to disappoint. The incongruity of objectives between the United States and the Gulf regimes has seldom been greater.

The Arab potentates would like to see the United States disarm and defang Iran, change the balance of power in the Syrian civil war against Bashir al-Assad, and resolve the Israeli-Palestinian conflict. Washington would like to pivot to Asia and leave behind the morass of Middle Eastern politics. It is hard to see how a symbolic gathering can bridge this chasm. 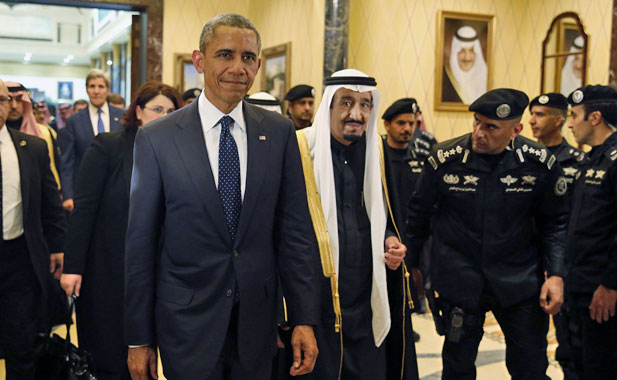 The difficulties between the two sides are compounded by the multiplying divisions within and between Arab states. In 1965, Malcolm Kerr, a historian of the Middle East, published a pithy book titled The Arab Cold War. The book chronicled how the Middle East was being polarized between radical republics and the conservative monarchies. The forces of militancy led by Egypt’s Gamal Abdul Nasser were challenging the monarchies as relics of a discredited past. This regional cold war bitterly divided the Arab world. It was a conflict waged by proxies, spies and, in the case of Yemen, by actual troops from Egypt supporting the Yemeni government and support for tribal forces from Saudi Arabia. The United States was an active player in that Arab cold war, as it buttressed the monarchies and actively pressured the revolutionary states.

The Arab cold war finally ended in 1967 when Israel destroyed the combined armies of Egypt and Syria. It was only after their momentous defeat by Israeli armor that Arab radicals called off their campaign against the oil-rich kingdoms. They no longer sought to displace those regimes but appealed to them for aid, which the monarchies provided as the price of ending the conflict.

The Middle East today is similarly fractured. This time the divisions are driven not by ideological struggles but sectarian identities. The incumbent Sunni states seek to rebuff a resurgent Iran and its Shia allies. This conflict is playing itself out in Lebanon, Yemen, Iraq, and Bahrain and, most dramatically, in Syria.

The new cold war differs from its predecessor in one important respect: It is about religion and not politics. As such, it is hard to see how it will end. Ideological disagreement can eventually dissipate, but religious discord is much more difficult to ease. Hovering over all this is a potential arms control agreement between the United States and Iran that the Arab states fear will pave the way for an Iranian bomb.

Today, U.S. priorities in the Middle East are starkly different than those of the Gulf sheikdoms. The White House’s foremost objective is to secure a compromise nuclear arms control agreement with the Islamic Republic. From Washington’s perspective there is no such thing as a perfect agreement. The Obama administration considers an accord that imposes some restrictions on Iran’s program with an intrusive inspection process preferable to either continuing with the sanctions policy or using force.

The Gulf Arab states see the emerging agreement as technologically permissive, with Iran being allowed too high a level of uranium enrichment capacity, and are particularly concerned about its sunset clause, in which essential restrictions on Iran’s enrichment activities expire after a decade. Moreover, many in the Gulf fear that the accord will lead to a U.S.-Iran rapprochement at their expense. After all, if the United States and Iran can settle the thorny nuclear crisis, why would they not cooperate on other issues of concern? The United States, this line of thinking holds, would treat Iran as a pivotal regional state whereby its interests will be taken into account as Washington plots its strategy. At a time when the Gulf states are desperate to contain the surge of Iranian influence, such fears have preoccupied them.

The Arab regimes see a series of conflicts that the United States must resolve and a series of failing states that it must rehabilitate. Washington’s gaze is more narrow.

The two sides that will gather in Camp David see different things as they look across the region.  The Arab regimes see a series of conflicts that the United States must resolve and a series of failing states that it must rehabilitate. Washington’s gaze is more narrow and its ambitions more circumspect. The United States remains committed to its war on terrorism in the region with its reliance on drones. It is seeking to degrade the self-declared Islamic State and prevent it from taking over strategic cities in Iraq.

Beyond that, there is no real U.S. Middle East policy to speak of. After much investment, the administration seems disinclined to resume its peace-making efforts between Israel and the Palestinian entity. The task of resuming any peace process is that much more difficult given the contentious relations between President Obama and Prime Minister Benjamin Netanyahu. The White House has no stomach for nation building even among nations it helped to destroy, such as Libya. And as far as containing Iran, while America may not go as far toward resuming ties with Iran as the Gulf regimes fear, it is not beyond reaching tactical accommodations with Tehran in places such as Iraq and on issues such as dealing with the Islamic State.

Given such disparate views, what can one expect from the summit at Camp David? There will surely be much rhetoric about the durability and the importance of the alliance. A friendship forged by Franklin D. Roosevelt and sustained by every president since will be celebrated. The Gulf rulers will likely be promised more arms, and there may yet be additional deployments of U.S. naval forces in the region. Intelligence cooperation and counterterrorism measures will be stressed. All parties will insist on the history of the alliance while avoiding its problematic future.

However, beneath the soothing rhetoric, the reality of disagreement will be hard to conceal. The Gulf sheikdoms will not get a commitment from the administration for a fundamental disarmament of Iran. What the United States has conceded in terms of enrichment capacity and a limited duration of the impending accord will not be reversed in a manner that will satisfy the Gulf rulers. The administration will find it difficult to renew its peacemaking diplomacy or compel either Israel or the Palestinians to adjust their views. Nor will the Gulf regimes find a United States ready to intervene in a measurable way in the Syrian civil war. In Iraq, the United States will continue to conduct counterterrorism operations while Iranian influence penetrates domestic politics.  And the failed states of Libya and Yemen will continue to fail without U.S. support.

The Middle East is entering a vulnerable and violent transition. This time it is doing so without America. After years of war and disappointments, the United States is eyeing a new continent with its own promises and rewards. It remains to be seen whether the twenty-first century will be an Asian century. However, it is unlikely to be a century when the United States doubles down on its commitment to the Middle East and expends precious resources to stabilize a region coming undone.