Skip to main content
A Coast Guard for the Emerging Arctic

A warming climate is opening the Arctic to greater human activity, and nations with interests in the region are examining the emerging strategic opportunities and challenges. Arctic sea ice receded to record lows in 2007 and 2012, and scientists project ice-free summers within decades.

Each of the five littoral Arctic states--Norway, Russia, the United States, Canada, and Denmark (Greenland)--has recently updated its policies with respect to this maritime frontier, assessing the considerable security, environmental, and commercial implications. As one measure of the region’s vast economic potential, a 2008 study by the U.S. Geological Survey estimated that about 22 percent of the world’s undiscovered oil and natural gas lie above the Arctic Circle. 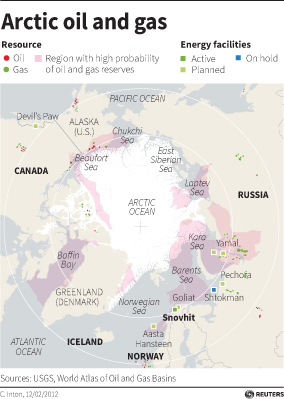 As the Arctic becomes a theater for greater international cooperation and potential competition, the U.S. Coast Guard--the nation’s longtime maritime constabulary and maritime emergency services provider--will lead U.S. interagency efforts in the region. The multi-mission Coast Guard is well positioned to pursue U.S. stated central interests in the region, including:

While some analysts have suggested that the Coast Guard become more of a war-fighting service to uphold maritime security and prevent conflict in the Arctic, this reflects a fundamental misunderstanding of the Coast Guard’s value and purpose. It is vitally important not to confuse maritime constabulary operations with defense or combat operations. The Coast Guard prides itself on having fought in each of the nation’s conflicts, but its stock-in-trade is its law enforcement, regulatory, and first-responder role.

Ellsworth Bertholf, first commandant of the Coast Guard (1915 to 1919, following the merger of the Revenue Cutter Service with the Life-Saving Service) aptly explained the difference between the Navy and the Coast Guard. "The Coast Guard exists for the particular and main purpose of performing duties which have no connection with a state of war, but which on the contrary, are constantly necessary as peace functions. It is, of course, essentially an emergency service and it is organized along military lines because that sort of an organization best enables the Coast Guard to keep prepared as an emergency service, and by organization along military lines it is invaluable in times of war as an adjunct and auxiliary to the Navy."

The new National Strategy for the Arctic Region, which aspires to deal with transportation, oil and gas exploration, tourism, environmental stewardship, scientific research, climate change, and tribal concerns, as well as national security, requires the robust capabilities of the Coast Guard.

The Coast Guard provides law enforcement and emergency management services, while regulating commercial shipping and various uses of the maritime environment along U.S. coasts and on the high seas of the Atlantic and Pacific Oceans. This capability will also be needed along the U.S. Arctic coast, where the United States must be able to ensure its sovereignty and protect the resources of its Exclusive Economic Zone (waters up to two hundred miles offshore). As the ice cap retreats, EEZs of Arctic nations will be more accessible to transiting ships, fishing vessels, adventure tourism, and research expeditions, in addition to potential oil and gas exploration.

However, the Coast Guard faces resource constraints that will challenge its ability to provide the steady U.S. presence a warming Arctic demands. "The emerging maritime frontier of the Arctic is significantly expanding our operating area," noted Commandant Admiral Robert Papp in the Coast Guard’s Arctic Strategy. Indeed, numerous studies have cited Coast Guard shortfalls in the Arctic.

In recent years, the Coast Guard, which is a branch of the Armed Forces but is in the Department of Homeland Security, has operated on an annual budget of roughly $10 billion, compared to $155 billion for the Navy.

Both of the Coast Guard’s heavy icebreakers have exceeded their original thirty-year service lives--while the Polar Star returned to duty this April after a major overhaul, the Polar Sea has been sidelined since suffering engine troubles in 2010. And with only one operable medium icebreaker, the Healy, the Coast Guard is currently forced to divert one of its National Security Cutters to service in the Arctic. These new Coast Guard flagships, all home ported in California, are three of a planned fleet of eight that were designed to patrol the high seas of the Atlantic and Pacific in support of homeland security and defense missions. While they can function in the Arctic, they are not optimized for the region’s extreme climate.

The 2010 Coast Guard High Latitude Study (PDF) noted: "The common and dominant contributor to these significant [Arctic region] mission impacts is the gap in polar icebreaking capability. The increasing obsolescence of the Coast Guard’s icebreaker fleet will further exacerbate mission performance gaps in the coming years." Additionally, the report found that "the Coast Guard requires three heavy and three medium icebreakers to fulfill its statutory missions."

While the Coast Guard is currently exploring the development of a new icebreaker, most Arctic nations are looking to expand or modernize their icebreaker fleets. Canada currently operates six, while Russia operates more than thirty and is the only nation to build nuclear-powered icebreakers.

In addition to pursuing investments in capability and infrastructure, the Coast Guard will also need to work closely with other federal agencies, the state of Alaska, private industry, and the other nations of the Arctic Council. The Council was established in 1996 "as a high-level intergovernmental forum to provide a means for promoting cooperation, coordination and interaction among the Arctic States."

The Arctic, perhaps more than any other region of the world, holds great promise for cooperative and collaborative governance. This does not mean shared sovereignty, but rather that neighbor nations along the Arctic Ocean have shown a willingness and ability to work together in areas such as oil spill preparedness and response, search and rescue, scientific monitoring, wildlife conservation and environmental protection, and sustainable development.

Yet the United States, scheduled to preside over the Arctic Council in 2015, is disadvantaged by not having signed the UN Law of the Sea Convention. UNCLOS establishes clear rights, duties, and jurisdictions of maritime states, and is particularly important for the Arctic as EEZs open up and nations make claims to the seabed beyond these zones. "To exercise leadership, improve our ability to influence outcomes, and effectively interact with other Arctic Nations, we urgently need the Senate to approve U.S. accession to the treaty," said Admiral Papp at the Center for Strategic and International Studies in May 2013.

To exercise sovereignty and operationalize the National Strategy for the Arctic Region, a federal maritime law enforcement presence is a pressing need. Currently, the Coast Guard must, out of necessity, work within its existing limited resource base, on a seasonal basis, to make this happen. But to ensure safe, secure, and environmentally responsible maritime activity, the Coast Guard will need an effective capability in the Arctic to provide the same services it offers throughout the rest of the U.S. coasts and EEZ.

What’s at Stake With Rising Competition in the Arctic?

A changing climate and growing competition for resources is raising tensions among Arctic nations.