Having cut short a trip to South Africa and annulled a planned state visit to Namibia, President Goodluck Jonathan of Nigeria declared a "state of emergency" in three northeast states on May 14. In a speech to the nation, Jonathan acknowledged that there is an "insurrection" and that the government has lost control of certain areas to Boko Haram, a diffuse Islamist movement.

More From Our Experts
Jacob Ware
The Violent Far-Right Terrorist Threat to the U.S. Military
Ebenezer Obadare
Whither Political Freedoms in Africa?
Christa N. Almonte
Inspiration in the Ranks

The security services are already doing what the emergency declaration would permit them to do. Jonathan has promised more troops for the three states, but it is unclear where he will find them, as the military is already overstretched. Islamist violence and the brutal response from the security services are making the northeast of Nigeria ungovernable, as the state of emergency confirms. Though the insurgency uses much of the rhetoric of jihadist movements elsewhere and is increasingly adopting their tactics, it remains essentially a domestic revolt against the Nigerian state rather than part of an international jihadist movement.

CFR’s Nigeria Security Tracker (NST) has tracked political violence in Nigeria since President Jonathan’s May 2011 inauguration, and some trends are clear. First, the graph of violence shows pronounced peaks and valleys; second, the security service’s joint task force of army and police has produced a high number of casualties; third, the insurgents’ tactics are evolving toward the style of internationalist jihadism.

As the tracker illustrates, violence in Nigeria spiked higher on April 14-20 than any previous week since Jonathan’s inauguration almost two years ago. It mostly involved Boko Haram and its splinter groups, which notably battled state security services in the far northeastern fishing village of Baga, in Borno, a state included in the emergency declaration. But the NST also charts rising levels of violence associated with ethnic and religious conflict in the middle part of the country, and growing security service violence in response to criminal activity, such as kidnapping, in other areas. 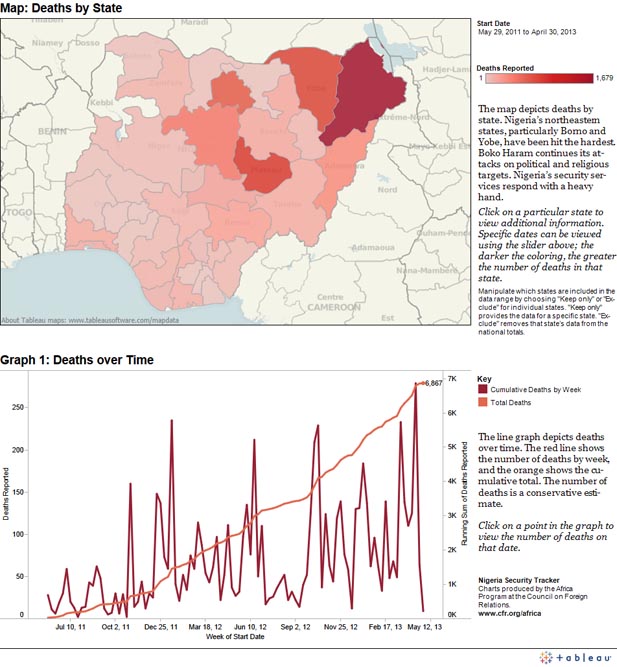 A Pattern of Violence

More From Our Experts
Jacob Ware
The Violent Far-Right Terrorist Threat to the U.S. Military
Ebenezer Obadare
Whither Political Freedoms in Africa?
Christa N. Almonte
Inspiration in the Ranks

May could prove to be as violent as April. On May 8, the New York Times carried a front-page story documenting how Nigerian security services dumped corpses of alleged Boko Haram militants at already overburdened local morgues. In some instances, the overflow of deceased sent the stench of decomposing flesh across several neighborhoods in Maiduguri, the capital of Borno. According to the article, the military delivers dozens of bodies a day to the city’s medical facilities.

The NST illustrates a pattern where Islamist violence provokes a brutal response from the security services that in turn drives popular support or acquiescence toward Boko Haram and its splinters. Northerners have described how, in the aftermath of Islamist attacks, security services round up large numbers of young men, many of whom are never formally arrested, prosecuted, or tried. They simply disappear. The Times report is evidence that the security services have likely extrajudicially murdered many of them. 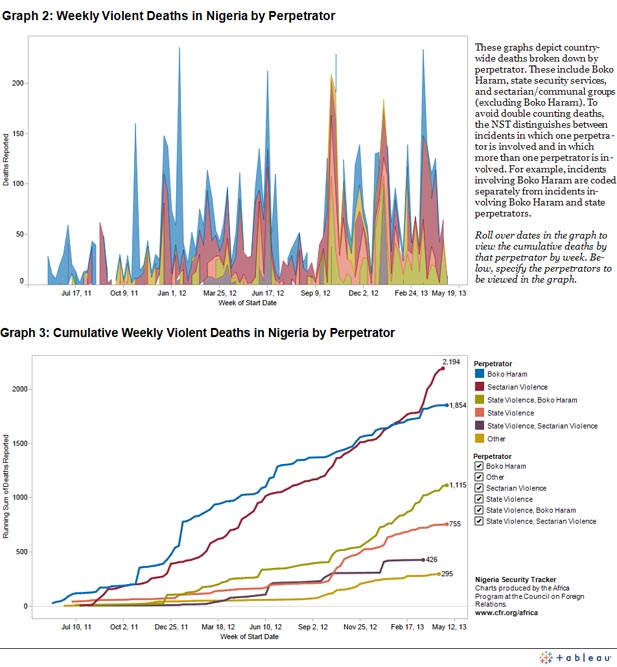 Several factors account for the brutality of the security services. In addition to being underpaid and poorly trained, soldiers and police are deployed outside of their native region as a matter of policy, in order to prevent their "favoritism" in a country with some 350 different ethnic groups and a population evenly divided between Christians and Muslims. Security service personnel often have little understanding or sympathy for the people they are supposed to protect. Many do not even speak the local language.

Meanwhile, the Jonathan administration stonewalls accusations of brutality. Outcry led by human rights organizations over the incident in Baga forced the administration to establish a commission of inquiry. But Nigeria has a long history of such commissions and their findings are rarely—if ever—made public.

Under pressure from northern leaders who are also directly threatened by the insurgents, President Jonathan has appointed a separate commission to explore a possible "amnesty" program for Boko Haram, but the insurgents have shown no interest in laying down their arms. Instead, they are increasingly using tactics associated with international jihadist groups, such as kidnapping and suicide bombs. In the aftermath of the French intervention in Mali, supported by the Abuja government and the Obama administration, Islamist rhetoric is becoming more anti-Western, and there are more frequent attacks on Christians. The U.S. drone base in Niger is widely viewed with suspicion in northern Nigeria, and not just among extremists.

The incessant violence is starting to impact the Nigerian economy. While Lagos hustles along without regard to the bloodshed in other parts of the country, economic activity has dipped, as in Kano, Nigeria’s second largest city. Enterprises with exposure in northern Nigeria are seeing profits shrink. Cross-border trade between northern Nigeria and its neighbors is also down.

Meanwhile, formal politics is almost entirely detached from reality. Goodluck Jonathan is widely regarded as feckless, especially in his response to the Islamist insurgency, but is still favored to win in the national elections scheduled for late next year. Nevertheless, there is more uncertainty about this election outcome than there has been at any time since the end of military rule in 1999. While Jonathan is trying to build support among the political class, his rivals are seeking to create a unified opposition party that could credibly challenge him at the polls. Sadly, both sides are resorting to traditional patronage-clientage politics without reference to the needs of the larger population.

So anxiety about the future is high. In their more pessimistic moments, some Nigerians express anxiety about whether the country in its current form will survive to election day. There is some sentiment in favor of a military takeover, but there is little evidence that the upper reaches of the military have the stomach for a return to power. While the Islamist insurgents do not offer a viable political alternative and remain divided among themselves, the threat they pose to Nigeria’s political and economic future are significant, as Jonathan’s state of emergency recognizes.

The federal government should reform the security services, including better pay and training, and end their impunity from legal prosecution. But, that would take time. Many northern leaders have urged that security service deployment be reduced, but Jonathan’s state of emergency moves in the opposite direction. In the longer term, decentralization of government authority, outlined in the country’s constitution but never really implemented, would be a step in the right direction. So, too, would be meaningful implementation of the rule of law, such as the arrest, prosecution, trial, and punishment of those convicted. Such steps would help address the North’s pervasive sense of alienation from the Abuja government and, increasingly, from the Federation.

As for the United States and other friends of Nigeria, the first principle must be "do no harm." The Islamist insurrection is the result of internal, specifically Nigerian, factors, especially a history of poor governance, impoverishment, and political marginalization against the backdrop of an Islamic revival. It would be unwise to view Nigeria’s situation through the prism of jihadist movements elsewhere in Africa, even if they share some of the same vocabulary. Nigeria’s friends should urge Abuja to approach the North through political means, rather than through more violence. A U.S. relationship with the Nigerian military would be particularly high risk. It is unlikely that U.S. training would be sufficient to affect military behavior. But even a token amount risks association of the U.S. military with Nigerian human rights abuses.