Egypt today limits free expression by jailing activists, journalists, and nongovernment-organization (NGO) employees on farcical charges such as insulting authorities, inciting unrest, and misinforming the public. When prominent Egyptian activist Alaa Abd El Fattah—who fought for democratic change before, during, and after the 2011 Arab Spring uprising—was sentenced to fifteen years in prison this June for organizing a street protest, now criminalized in Egypt under the country’s 2013 Protest Law, it became clear that the government’s goal is no longer to merely contain or silence dissent. Rather, it seeks to seal off the arena of civil society altogether. 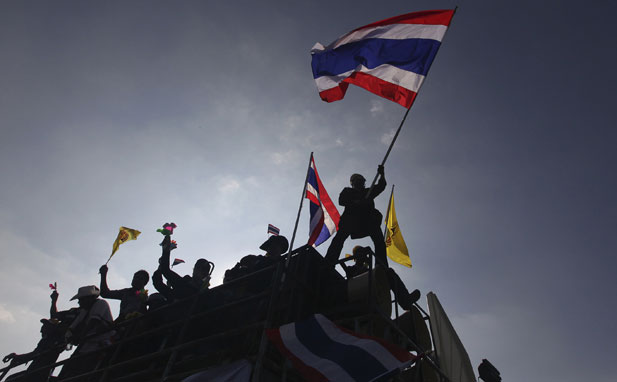 A protester waves the Thai national flag atop a truck at the Democracy Monument in Bangkok. (Photo: Kerek Wongsa /Courtesy Reuters)

Egypt is one example of a trend ranging from the Middle East to China, from Russia to Rwanda, of illiberal governments seeking to monitor civil society and shrink its room to dissent and rally for reform. On the surface, it appears that U.S. influence to reverse this trend is also diminishing. Washington has undermined its own legitimacy in its pursuit of national security with inconclusive military interventions, its detainee and drone policies, and its overreaching surveillance program.

Still, the United States has enormous stakes in enlarging civil-society space, even beyond human rights. Backing brittle autocracies for counterterrorism partnerships or access to energy-producing resources is often a recipe for instability. On the other hand, openness and free expression facilitate reform and innovation, which can in turn lead to economic development and prosperity. To cite but one example, civil society demands for open information on SARS in China advanced public health in the country. A 2013 World Economic Forum Report confirmed the benefits of a resilient civil society.

There is an emerging geopolitical contest between forces of repression and expression. A battle for civil society space, a space race of sorts, is becoming increasingly intense in countries like Venezuela, Ecuador, Zimbabwe, Bahrain, Iran, and Thailand. Focusing on indigenous, nonviolent movements as the most effective engine of durable change, the United States must forge a new diplomacy engaging these groups even if it means upsetting authoritarian governments seen as allies.

What Is Civil Society and Why Back It?

In their 2011 book Why Civil Resistance Works, Erica Chenoweth and Maria J. Stephan collected data on all known violent and nonviolent campaigns from 1900 to 2006. Defining success as achieving its own "stated goals (regime change, anti-occupation, or secession)" within a year of a campaign’s peak and being recognized by regional neighbors, the study found nonviolent campaigns proved more than twice as effective as violent ones, a trend that increased over time in both success and frequency. All the nonviolent campaigns that mobilized more than 3.5 percent of the population as participants succeeded. When facing violent state repression, nonviolent resistance was more effective than violent resistance, and it resulted in higher rates of democratic consolidation five years after the campaigns ended. The same skills necessary for building a large-scale nonviolent campaign are needed for durable democratic governance.

’The vitality of nonviolent campaigns can be seen in the recent successful anti-regime Maidan movement in Ukraine, and the Saffron Revolution of Buddhist monks that prodded Myanmar’s government to liberalize. Earlier, the Charter 77 Movement in the Soviet bloc demanded change based on the Helsinki Accords’ human-rights benchmarks and external monitors bearing witness. Even preeminent realpolitik strategist Henry Kissinger highlighted these actors’ importance in the Soviet Bloc’s unraveling in the third volume of his memoirs.

Most civic movements need outside help to succeed. The United States and European powers have been the chief sources of support, from backing Serbia’s Otpor movement to oust Slobodan Milosevic, to the color revolutions, such as the Orange Revolution in Ukraine. The Global South’s major democratic powers—such as Brazil, India, and South Africa—are loathe to become involved in other developing nations’ internal affairs, despite the great legitimacy their help would offer. Despite modest support from the United Nations Democracy Fund and UN resolutions, the UN will not be a major source of help; it is stymied by authoritarian member states and these same Global South democratic governments. U.S. leadership remains crucial.

A New Kind of Diplomacy

Some will argue that the United States cannot afford to invest in soft power tools to help enlarge the space for civil society. However, as an inexpensive force-multiplier, it cannot afford not to invest in those tools. Even before Congressional trimming, for fiscal year 2014, the administration of President Barack Obama requested just $746 million in aid for political competition and civil society, and $731 million for international broadcasting. Doubling these figures would be quite affordable, considering fiscal year 2014 appropriations of $7.27 billion for international security assistance and $8.4 billion for global health programs.

However, U.S. support for civil society has not been implemented systematically. Such a shift in diplomacy would entail three basic elements:

First, the United States should stop inflexibly backing autocracies. It has repeatedly made this mistake in Egypt. Because Egypt maintained peace with Israel, the United States bankrolled Hosni Mubarak’s government for more than thirty years; took a soft stance after former secretary Rice’s 2005 push for reforms were not met by the deadline two years later; dithered in isolating Mubarak when protestors first took to Tahrir Square in 2011; failed to immediately slash aid when his Muslim Brotherhood successor Mohammed Morsi suspended judicial review; and stalled for months in labeling Morsi’s removal a coup, lest a U.S. law suspending aid be triggered. It still backs aid for a government led by the coup’s engineer, Abdel Fattah el-Sisi, as civil society founders in the Arab world’s most populous country.

In her memoir, Hard Choices, Hillary Clinton expresses exasperation with Egypt’s anti-Mubarak social media protestors’ unwillingness to involve themselves in politics long-term. The third pillar to supporting civil society abroad is to cultivate capable democratic leaders willing to work for reform in their own countries. Diplomats should prioritize helping them develop political skills. Independent grantees with deep expertise, like the National Endowment for Democracy’s entities and Freedom House are far wiser conduits for funding and training these potential leaders, instead of contractors who offer cookie-cutter programs and who tend to micromanage. In some cases civil society actors may not want overt U.S. support, if they view it as tainted (as some in Iran felt in 2009). U.S.-funded training should not be mistaken as handpicking winners, nor should it require infallibly predicting who will prove to be tolerant or capable. Washington should not worry about expanding the space for voices that may disagree with some of its policies, as long as it favors nonviolent actors inclined toward a pluralism of voices.

The United States has a crucial role to play in countering illiberal states’ efforts to squeeze civil society’s space—for the sake of human rights, more responsive governance, and economic dynamism. U.S. assistance to nonviolent civil society reformers is far wiser than inaction, aid to violent groups less inclined toward consensual politics once in power, or invasion and occupation. This focus offers the very centerpiece of a continued U.S. leadership role, one in which the U.S. neither serves as the world’s policeman nor pulls back from the world, the false choice offered in today’s foreign policy debate.

Rather than simply focusing on its colossal military capacity, the United States must be equally concerned with sharpening its tools of soft power. It must give a new sense of purpose and heft to policies pursued selectively and half-heartedly in the past. Chief among those policies are: eschewing counterproductive support for authoritarian "allies", sponsoring media where free information is asphyxiated, and cultivating democrats, without robbing them of their own agency. If it fails to follow through, the United States is walking off the playing field and leaving the governments in Moscow, Beijing, Caracas, Riyadh, and elsewhere to muzzle civil society, and claim that their models are the wave of the future.