Iran’s Revolutionary Guards have been much in the news in the past few years. They are at various times presented by Western media as a paramilitary force rampaging in a disorderly Middle East, entrepreneurial businessmen who may be useful allies of President Hassan Rouhani as he attempts to open up the economy, and a zealous ideological force helping Supreme Leader Ali Khamenei in his quest to sustain the Islamic Republic. A look at the Guards from their inception reveals that all of these descriptions bear a measure of truth and that the context of Iranian politics and the regional order has done much to condition the Guards’ mission.

The Guards made their first appearance during the latter stages of the 1979 revolution that deposed the shah. Ayatollah Ruhollah Khomeini, the leader of the revolution, did not trust Iran’s military and needed his own force as various factions and militias battled for influence in those chaotic days.

The unit was drawn from pious young men, mostly from working-class backgrounds. They were attracted by Khomeini’s mission of salvation and his quest to ensure God’s rule on earth. From the very beginning a strong ideological bent permeated the organization and sanctioned its view that violence was a justifiable response to the Islamic Republic’s detractors, both domestic and foreign.

Spear of the Islamic Republic

“The Guards were instrumental in the suppression of the [Green] movement, preserving the regime.”

The Guards would likely have remained a small internal security force operating on the edges of the regime had it not been for the Iran-Iraq war. As often in history, wars make careers. And Saddam Hussein’s impetuous invasion of Iran in 1980 ultimately brought the Guards to a new height of power and prestige. The Guards proved daring if largely incompetent, especially early in the war. Their operating principle was that faith and commitment could overcome Iraq’s technological superiority. They oversaw mass attacks on Iraqi lines, whereby young men, some as young as twelve years old, were dispatched to walk across minefields and clear a path for the military. These suicide missions endeared the Guards to the clerical oligarchs who appreciated their zeal and tenacity at a time when the regular military was often cautious and deliberate. It was at this point that the Guards began their expansion in terms of numbers, funds, and weaponry.

The individual most responsible for the Guards’ emergence as current status was a pragmatist, President Hashemi Rafsanjani. He encouraged them to participate in postwar reconstruction after the conflict ended in 1988. Despite their struggles in the war, the Guards had developed engineering skills viewed as vital for rebuilding. They learned they could profit from this new role and soon front-companies—typically smaller firms not subject to outside sanctions—and other businesses directly responsive to the Guards started appearing.

While Rafsanjani was mainly a supporter of the Guards’ role in rebuilding, the Supreme Leader backed their effort to assemble a potent security apparatus (see figure below). It was at this point that the famed Quds Brigade was created to forge the revolution beyond Iran’s borders. And the Guards began to develop their domestic surveillance arm and pay close attention to dissent within Iran.  These efforts would make the Revolutionary Guards the most important single organization within the Islamic Republic, with their own corporate identity and corporate interests. Today, they number about 125,000. 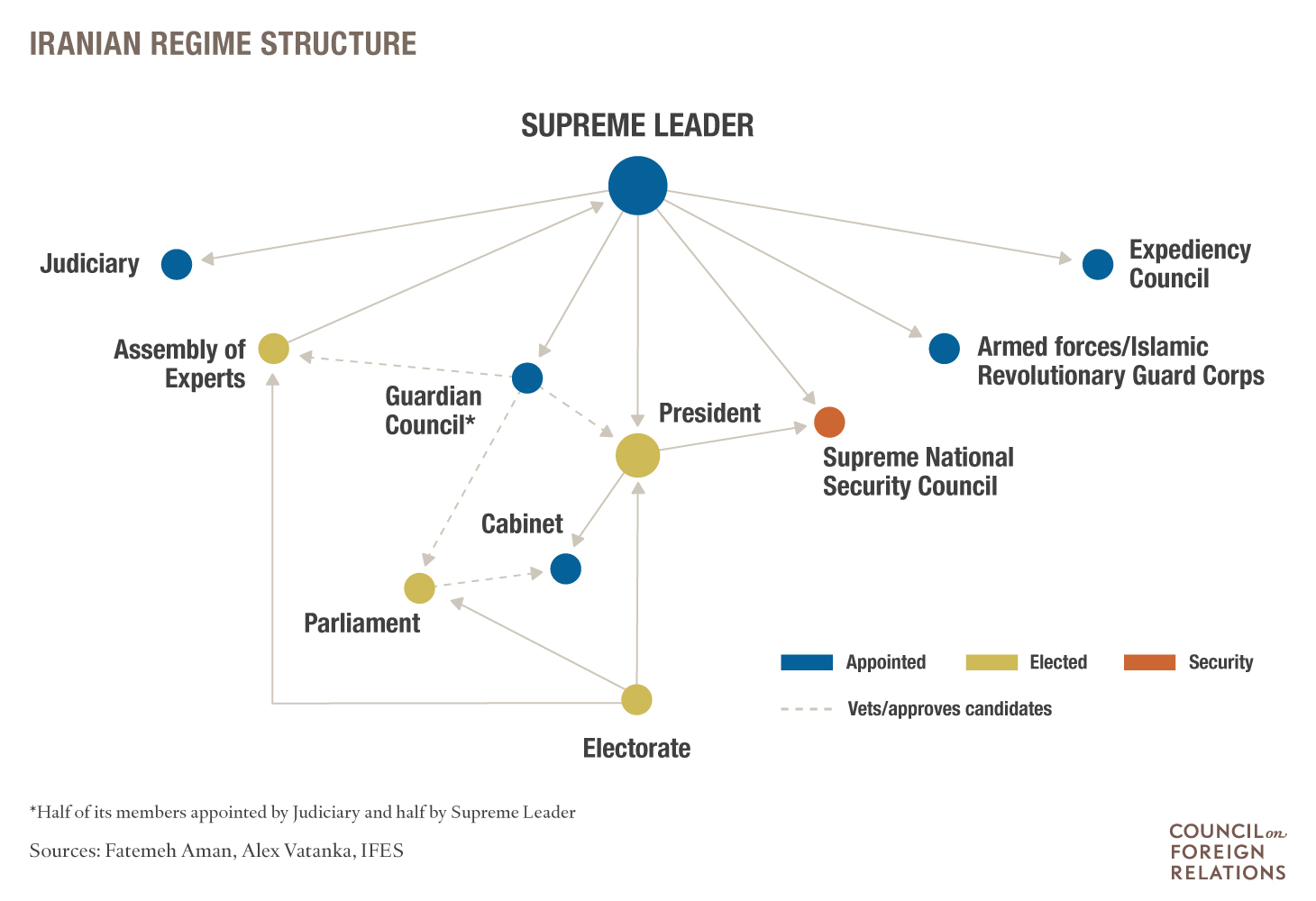 The regime’s investments in the Guards came in handy once the reformist Mohammad Khatami assumed the presidency in 1997. The new president was genuinely interested in liberalizing the Islamic Republic and resting its legitimacy on a popular mandate. He spoke of expanding civil society and critical media. His popularity concerned the guardians of the theocracy as they fully appreciated that their constituents were more interested in freedom than religious orthodoxy. The specter of Mikhail Gorbachev’s failed attempt at reforming the Soviet Union hung over the Islamic Republic, and many feared that reform would lead to the regime’s extinction.

The student riots of July 1999 confirmed to the hardliners that Khatami’s experiment had gone too far. The institutions of the Islamic Republic now arrayed against him. Backed by hardline clerics, the Guards repressed the students; the courts closed newspapers and convicted reformers on trumped up charges, and the intelligence ministry assassinated dissidents. The Guards’ warnings that they were willing to shed blood for the Islamist regime helped undermine Khatami.

Hardliners, reacting to Khatami’s presidency, established a redline: they would no longer tolerate a reformist presence in the government. This was reinforced in the summer of 2009 when the fraudulent reelection of President Mahmoud Ahmadinejad caused massive demonstrations. The Green Movement that led those protests was the direct descendant of the reformers and shared its aspiration to create a more tolerant republic. The Guards were instrumental in the suppression of the movement, once more preserving the regime.

The Guards’ domestic preoccupations should not obscure their all-important internationalist mission. The Middle East today presents unique opportunities for Iran to project its power from the Persian Gulf to the Mediterranean. The Islamic Republic views the developments since the Arab awakenings as some of the most important turning points in the region’s history. The essential collapse of the Arab state system and the creation of the many power vacuums in the region have offered tantalizing opportunities for a state that has always harbored imperial dreams. Iran seeks to become the most important player in Iraq and Syria and a commanding voice in the Gulf. The Guards, particularly the Quds Brigade, now numbering about fifteen thousand, are in the forefront of projecting Iranian influence. Among other tasks, they help train and provide intelligence for forces fighting on behalf of Bashar al-Assad’s regime in Syria and assisting Shia militias arrayed against Islamic State forces in Iraq.

"The Guards have been in the forefront of insisting that the United States is a spent power in the Middle East."

The Guards have been in the forefront of insisting that the United States is a spent power in the Middle East, and celebrated their January capture and brief detention of ten U.S. sailors who sailed into Iranian territorial waters. "The U.S. is aware that it cannot launch an offensive against the Islamic [Republic] and is sure that the Iranians enjoy very high power and capability to confront it," said the commander of the Guard’s navy, Admiral Ali Fadavi, in April.

The message to both Rouhani and the region’s Sunni Gulf monarchies is that the United States is too feeble to stop Iran’s provocations.

In the coming years, the Guards are likely to be a force in both Iranian as well as regional politics. The Guards and the hardline clerics have a relationship of mutual dependence. As deeply pious men, the Guards need the approbation of the priestly class. And as politicians seeking power and regional preeminence, the clerics need the reliable muscle of the Guards. The region’s future may yet be defined by the compact between these two forces.