Skip to main content
How Washington Can Bolster Iraq

The advance of jihadists in northern Iraq has spurred appropriate responses from Washington on the political and military fronts, though more could be done to undermine the Islamic State of Iraq and Syria (ISIS). Amid the unfolding events, the Obama administration will need to apply sustained pressure on Iraqi politicians to enact meaningful reforms, with intensified military support for the central government contingent on those reforms. 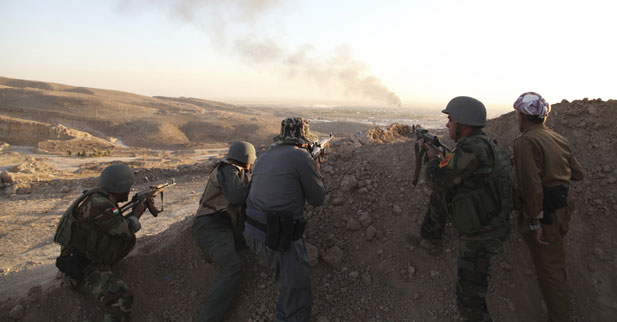 Iraqi Kurdish peshmerga troops watch as smoke billows from the town of Makhmur during clashes with ISIS militants. (Photo: Azad Lashkari /Courtesy Reuters)
More From Our Experts
Max Boot
German and U.S. Tanks Will Be Critical in Ukraine’s Next Phase Against Russia
Sheila A. Smith
Don’t Overlook Japan’s Diplomatic Heft
Paul B. Stares
Conflicts to Watch in 2023

ISIS, fighting alongside a mélange of jihadi groups, former elements of Saddam Hussein’s regime, and Sunni tribes, has gained control over about a third of Iraq and Syria. Battlefield outcomes have created what former U.S. ambassador to Iraq Ryan Crocker aptly refers to as "Shiastan," "Jihadistan," and "Kurdistan." Years of pro-Shia sectarian policies by Iraqi prime minister Nouri al-Maliki have alienated Iraqi Sunnis, paving the way for even moderate Sunnis to prefer accommodating IS to submitting to Maliki’s rule. If Maliki remains prime minister, hope for a unified Iraq seems lost. The ethnic heterogeneity of many cities and towns in Iraq suggests that partition of the country would be a bloody affair.

Fortunately, Maliki may be on his way out. Iraq’s Kurdish president, Fouad Massoum, on August 11 gave Haider al-Abadi, a Shiite deputy parliamentary speaker, thirty days to obtain parliamentary approval for a new government. He did so after the National Alliance, a coalition of Shiite parties, nominated al-Abadi as prime minister. Maliki has responded to efforts to unseat him with fierce rhetoric, tanks in the streets, and threats of legal action against Massoum. Maliki’s grasp on power, however, has weakened greatly in recent weeks as a result of opposition to his continued rule from the influential Shia cleric Grand Ayatollah Ali al-Sistani and Iranian leaders. At this time of grave jihadist threat and political reshuffling, U.S. support for a unified Iraq is vital.

The violence in Iraq puts core American interests at risk. In his remarks before the UN General Assembly last year, President Barack Obama announced that the United States is prepared to use military force to assist partners who confront external aggression, to ensure the free flow of oil, to dismantle terrorist networks, and to prevent the development or use of weapons of mass destruction. More recently, he added humanitarian crises that "stir the conscience" to this list. ISIS activities threaten all of these core interests, with the sole exception (for now) dealing with acquisition or use of weapons of mass destruction. The group’s atrocities perpetrated against Yazidi and Christian civilians constitute crimes against humanity. The jihadists and their allies have their hands full fighting a multi-front war, yet harbor ambitions well beyond Iraq and Syria. ISIS’s recent dropping of "Iraq and Syria" from its title, leaving its new name merely the "Islamic State," indicates expansionist intentions involving at least Jordan and Saudi Arabia.

U.S. officials are rightly concerned that jihadis in Iraq and Syria will, sooner or later, attack the United States. Of the twelve thousand or so foreign fighters, at least one thousand are Westerners, approximately 100 of whom hold U.S. passports. After receiving training and combat experience, these individuals may travel to the United States to wreak havoc domestically. A few weeks ago, German and Australian suicide bombers blew themselves up in Baghdad. Last January, the head of ISIS, Abu Bakr al-Baghdadi, threatened that his followers would soon be in "direct confrontation" with the United States. Shortly before blowing himself up in a recent suicide attack in Syria, Moner Mohammad Abusalha, a U.S. citizen, excoriated the United States for killing Muslims, threatening, "You think you are safe; you are not safe."

Such threats have not been lost on U.S. officials. General Michael Flynn, the director of the Defense Intelligence Agency, believes that the foreign fighters "have every intention to come back to this country and do damage here." Deputy Assistant Secretary of State Brett McGurk says it is only "a matter of time" before ISIS terrorists, holding Western passports, engage in suicide attacks outside of the region. Attorney General Eric Holder calls this threat from ISIS members "more frightening than anything I think I’ve seen as attorney general."

The United States has pursued a number of responses to the fighting in Iraq. Its forces have begun bombing a small number of ISIS targets in Iraq with the stated aim of protecting Americans on the ground and easing the plight of some fifteen thousand Yazidis. The Yazidis have avoided genocide by fleeing to Mount Sinjar, where nonetheless many are dying of dehydration and other afflictions. Obama says the airstrikes could continue for months. Beyond the airstrikes, the United States will begin providing much-needed ammunition and light arms directly to peshmerga forces struggling to fight off ISIS militants.

The State Department has approved a $700 million sale of five thousand additional Hellfire missiles to the Iraqi military along with a five-year, $500 million contract providing logistics support to U.S.-origin Iraqi military aircraft. The United States has improved its intelligence by establishing combined Joint Operations Centers in Baghdad and Irbil, and by using manned and unmanned aircraft to collect targeting data. It has sent some 750 troops to Iraq to defend American facilities and to assess the situation on the ground. It is countering the threat to the homeland by tracking the movement of the foreign fighters.

Just as significantly, U.S. officials are pressuring Iraqi leaders to create a more inclusive, less sectarian, central government, making clear its insistence that Maliki step down. Senior U.S. military officials, including the Chairman of the Joint Chiefs of Staff, have all publicly stated that no form of U.S. military involvement would solve the problems in Iraq in the absence of a unity government. Secretary of State John Kerry has threatened to shut off aid to Iraq if Maliki interferes with the process of choosing Iraq’s new prime minister.

A Ramped Up U.S. Role

Americans have no stomach for widespread ground operations in Iraq. The United States, however, can still play a robust role in thwarting the militants. The United States ought to offer more extensive military assistance, but should do so in a manner that encourages political reforms by the Iraqi government. The United States must continue pushing for Maliki’s departure. Less sectarian Iraqi leadership and policies would encourage moderate Sunnis in Iraq to withdraw support from, and, ideally, join the fight against ISIS. They would also help U.S. officials to keep Saudi Arabia and other Sunni countries out of Iraq’s civil war.

U.S. leaders should announce that if a nonsectarian government emerges in Baghdad, the United States will greatly expand intelligence sharing, arms sales, and training of Iraqi government forces. Senior U.S. officials should inform Iraqi leaders that if the prime minister does not step aside, the United States will begin providing the peshmerga with armored vehicles, helicopters, and missiles. Sunni tribes in Iraq that are willing and able to take the fight to the jihadis could potentially also receive American arms, though such a policy would run the risk of indirectly arming ISIS should these groups fail to deliver. The United States should arm the Free Syrian Army as part of a more comprehensive strategy to undermine ISIS.

U.S. aircraft should strike a wide range of ISIS targets in Iraq and Syria when opportunities present themselves. Washington should place additional pressure on Turkey to stem the influx of foreign fighters into "Jihadistan," offering assistance and rewarding good behavior. And, the United States should provide military training and other help to strengthen Jordan and other allies against potential contagion.

Even in the best of scenarios, ISIS will hold territory in Syria and Iraq for some time to come. The United States has taken steps to improve its tactical intelligence. Yet, given the long-term nature of the threat and of American interests in the region, more work is needed improving strategic intelligence. As former secretary of defense Robert Gates noted in 2008, "Too many mistakes have been made over the years because our government and military did not understand— or even seek to understand—the countries or cultures we were dealing with." This shortcoming led Gates to establish a research center at the National Defense University, the Conflict Records Research Center (CRRC), to make captured records from Iraq and from jihadist movements available to nongovernmental researchers. In a regrettable twist of fate, the CRRC is on the verge of closing its doors for lack of $1 million a year just as battlefield victories by Islamist extremists remind observers of the continuing need for precisely the sort of knowledge that the CRRC facilitates and provides.

The United States should spend the pittance needed to improve intellectual capital relative to Iraq and violent jihadis by providing continuing funding for the CRRC. Iraq’s future will lie primarily in the hands of Iraqis, with America and others delivering meaningful, yet only marginally significant, assistance. Still, the United States must aim to make its impact as meaningful as possible.