Skip to main content
How to Watch the Presidential Debates

The presidential race will enter a new phase next week with the first of three scheduled debates between Republican candidate Donald Trump and Democratic candidate Hillary Clinton (a fourth debate, between the vice-presidential candidates, is scheduled for October 4). There is likely to be plenty of attention on foreign policy in these discussions given that Trump has made immigration and national security signature issues, and that Clinton has emphasized her experience as Secretary of State.

But don’t tune in expecting fact sheets. When the candidates take the stage, explaining their positions to voters will be a secondary goal. Their prime objective will be to frame the issues in ways that reflect and reinforce the broader themes of their campaigns. They also hope to draw favorable contrasts with each other where possible and shape how various media spin the exchanges in the weeks leading up to Election Day. After all, most voters do not pay much attention to foreign policy, and many will not watch the debates.

Don’t tune in expecting fact sheets. When the candidates take the stage, explaining their positions to voters will be a secondary goal.

Clinton uses discussions of foreign policy to emphasize her experience and qualifications. She also makes the broader argument that a robust foreign policy—where the United States is actively engaged in addressing international problems—has domestic economic and security benefits. In her view, American action abroad is worthwhile as long as the United States is working with allies and using a mix of diplomacy and military power.

A unifying theme of Trump’s campaign is portraying himself as a skilled negotiator who can broker better international deals for the United States, making the country safer and more prosperous while reducing costs to the taxpayer. He argues that existing international arrangements have allowed both friends and foes of the United States to take advantage of American power. The United States should both pull back from some of its overseas commitments and shift some of the financial burden of international problems onto other countries, in his view. 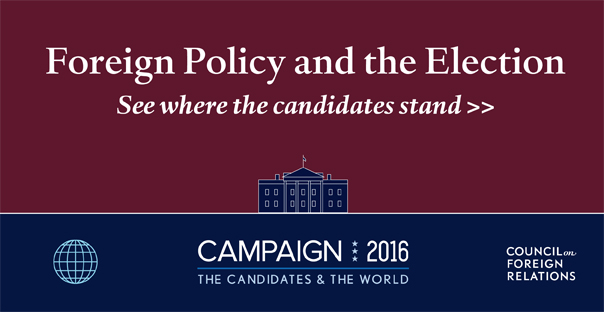 Three issues in particular—immigration, the self-proclaimed Islamic State, and alliances—exemplify how foreign policy discussions in the debate will serve multiple purposes for both candidates.

The candidates will use discussion of immigration to reinforce both their foreign policy and domestic messages. Hillary Clinton has argued that an open and well-enforced immigration system benefits both the U.S. economy and national security, and reflects American values. She has generally favored efforts to increase the number of immigrants to the United States, provide a pathway to citizenship for the millions of undocumented, and make deportation and detention policies more humane while improving screening and enforcement. Clinton has called immigration a “family issue” and argued that the influx of foreign workers brings important benefits to the U.S. economy. She also favors expanded U.S. acceptance of refugees from Syria. She told an audience at CFR in December 2015 that “we cannot allow terrorists to intimidate us into abandoning our values and our humanitarian obligations,” and that “We should be doing more to ease this humanitarian crisis, not less.”

Trump’s discussion of immigration tends to emphasize what he sees as the security, economic, and cultural failures of the current system. He has called for policies that would make the immigration system much more restrictive, including mass deportation of undocumented immigrants, erecting a wall across the entire U.S.-Mexico border, temporarily banning Muslims from entering the United States, and other restrictions on legal immigration. Many of these policies are aimed at particular minority groups. In an August 2016 speech on immigration, Trump stated that the United States should have an “ideological certification to make sure that those we are admitting to our country share our values and love our people.” Trump also talks about immigration as an economic issue. He frequently highlights the cost of both illegal immigration and the immigration system more broadly, and has called for Mexico to pay for his proposed wall.

Some of the similarities and differences between Trump’s and Clinton’s positions on confronting the Islamic State reflect their broader campaign themes. Consistent with her interventionist track record and her broader argument for an activist foreign policy, Clinton argues that the United States should be doing more in Syria, including conducting more air strikes and establishing a no-fly zone. However, she has stated that she does not support sending U.S. ground troops. For his part, Trump has said he does not favor U.S. involvement in overseas conflicts generally, in line with his desire to pull back on U.S. commitments. However, consistent with his emphasis on toughness, he also has said he would support sending troops to Syria and creating a no-fly zone. He has also claimed he is being deliberately vague about his policy for defeating the Islamic State, to keep foreign adversaries guessing.

When they discuss the Islamic State and terrorism more generally, both candidates will be trying to promote a particular image of themselves as commander-in-chief. In this case, then, how they talk about confronting the Islamic State—for example, how severe they see the threat, whose advice they will seek to address it, or how they will make their decisions—may be as much a part of their message as the details of their proposals. Clinton will likely try to emphasize her experience in dealing with countries in the region and that diplomacy is an important tool for containing the Islamic State. Trump argues that the United States has underestimated the severity of the threat from the Islamic State and often states that he will shift U.S. policy in a tougher direction, even beyond what the military has recommended. In the “Commander-in-Chief” forum on September 7, 2016, for example, Trump said that “the generals under Barack Obama and Hillary Clinton have not been successful,” and suggested he might replace some of them.

Alliances are not usually a hot topic in debates, but in 2016 they have emerged as a sharp point of disagreement between Clinton and Trump. Clinton, who as secretary of state spent a lot of time working with U.S. allies, sees acting through alliances as central to her foreign policy approach. She is thus a strong supporter of the United States’ traditional allies, including NATO, Japan, and South Korea. In a speech at Stanford University in March 2016, she called NATO “one of the best investments America has ever made.” Trump, in contrast, has repeatedly said that he believes the United States spends too much on its alliances, that foreign partners should pay more for their own defense, and that the United States might curtail or end its support for some allies. In an interview with the New York Times in July 2016, he said that if the United States was “not going to be reasonably reimbursed for the tremendous cost of protecting these massive nations with tremendous wealth,” then he “would be absolutely prepared to tell those countries, ‘Congratulations, you will be defending yourself.’” He has also suggested that he would support Japan and South Korea acquiring their own nuclear capability, rather than relying, as they have for decades, on the U.S. nuclear force to deter threats.

Alliances are not usually a hot topic in debates. But in 2016, they have emerged as a sharp point of disagreement between Clinton and Trump.

The issue of alliances—which, in turn, affects many other foreign policy and national security issues, including U.S. policy toward Russia, China, and North Korea, among others—illustrates how the candidates might try to convey multiple messages in a single debate exchange. Trump’s emphasis on reducing cost and burden-sharing, for example, is intended to remind voters that alliances cost money. Clinton, in contrast, sees alliances as well worth their cost because they help advance U.S. security and prosperity. Clinton may also discuss her visits to allied countries as Secretary of State, less for the details of what occurred during those meetings and more to remind voters that she has experience conducting high-level U.S. diplomacy.

When the candidates talk about alliances, their messages will also be heard outside the United States. Allies may fear that Trump’s policies will lead to decreased U.S. military commitments in Europe or Asia, as well as the potential follow-on consequences. For example, CFR’s Sheila Smith has warned that encouraging Japan to obtain nuclear weapons could lead to increased arms competition and tensions in Northeast Asia. Hillary Clinton will seek not only to explain her alliance policies to American voters, but also to reassure U.S. allies that she would continue to support U.S. commitments if she is elected.

The details of foreign policy—as opposed to broad statements about “toughness” or leadership competence—are rarely central to elections. Much as we might wish for an in-depth discussion of foreign policy specifics, the candidates will likely use the debates as an opportunity to advance their campaign narratives. For those who tune into the debates—or those who hear about them the next day on the news—the nuances of the candidates’ positions will likely be lost in the broader messages the nominees want to convey.