An especially virulent form of bird flu has taken a record-breaking toll this year in China, raising alarms in Beijing and at the World Health Organization (WHO) headquarters in Geneva. The H7N9 form of influenza, which first emerged in China in March 2013, has killed eighty-seven people between January 1 and February 12, 2017, more than in any previous season since the original outbreak, in 2013. On February 11, health authorities identified this year’s first acute case, in Beijing, raising national concerns in China. 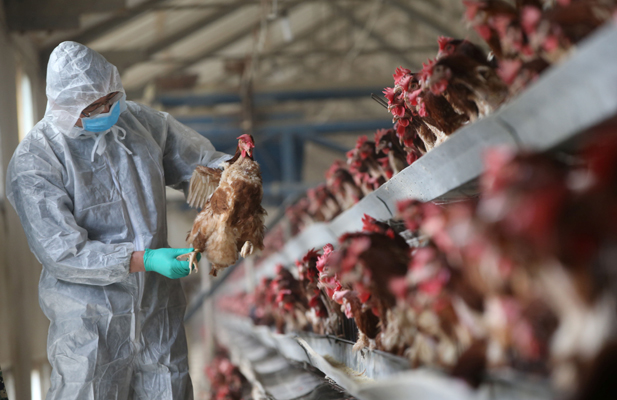 The H7N9 virus circulates in wild birds, which may pass it on to domestic poultry and songbirds by contaminating food and water with virally infected feces or through competition over food that leads to pecking and fighting. The original outbreak spread from wild birds to live poultry markets and songbird sales centers and then on to people, so it is worrying that more than a third of the chickens and other poultry randomly screened in live animal markets that serve a population of seventeen million in the southern city of Guangzhou tested positive for H7N9 this month. Though most of the patients caught their infections directly from handling birds, there were clusters of human-to-human transmission, raising the prospect that H7N9 could become an epidemic, or even a pandemic, among people.

The virus is far more virulent than the type of influenza that killed an estimated fifty to seventy-five million people in 1918 and 1919.

A common feature of H7N9 outbreaks is transmission within families and inside hospitals, where there is intimate contact between patients and caregivers. But so far the virus has not taken on a form that can be spread from one stranger to another, via coughing or handshakes, as is the case with seasonal, routine flus. That’s a good thing, given how deadly H7N9 is. The U.S. and Chinese centers for disease control have worked together closely since 2013, tracking cases and trying to anticipate changes in the virus that might make it more contagious among human beings (So far, the virus has not mutated dramatically since 2013.)

The prospect of an H7N9 pandemic has caused great concern since the first human cases emerged five years ago because the virus is far more virulent than the type of influenza that killed an estimated fifty to seventy-five million people in 1918 and 1919. That strain is estimated to have had a fatality rate of about 2 percent. In contrast, 30 to 40 percent of the more than 1,100 people who have been identified with H7N9 since 2013 have died. On January 10, before this latest surge in China, the United Nations Food and Agriculture Organization identified 1,040 human cases since 2013, 368 of them fatal. A few days later, Dr. Margaret Chan, director-general of the WHO, warned her agency’s executive board, "Since 2013, China has reported epidemics of H7N9 infections in humans, now amounting to more than one thousand cases, of which 38.5 percent were fatal."

Since January 23, the WHO has been on official “high alert” for H7N9. The status constitutes a global warning but does not require specific actions beyond heightened surveillance. If the H7N9 situation were to become more serious, the director-general could designate it a “public health emergency of international concern,” which would trigger a chain of events including global calls for funding and vaccine production. Three days after the WHO raised its alert, the U.S. Centers for Disease Control and Prevention issued a travel advisory, warning Americans destined for China and neighboring nations to avoid live animal markets and exposure to birds while in the region.

Cases of H7N9 in people have been identified since December 2016 over at least six Chinese provinces, from the nation’s southernmost regions to north of Beijing. For the first time, human cases have appeared in Sichuan province. The deadly H7N9 virus also emerged this year in Taiwan, Japan, South Korea, Hong Kong, and Macau.

The H7N9 situation is further complicated by the apparent rise in pathogenic bird flus of various types all over the world. Since November 2016, more than forty nations have reported such outbreaks, some involving human cases and deaths. In China, for example, H7N9 is but one of five avian influenza outbreaks circulating simultaneously in various parts of the country, prompting mass cullings of infected flocks and some human deaths. A less-virulent form of H7N9 is spreading among birds in the Netherlands and China, further complicating surveillance efforts. There is some cross-reactivity in antibody tests for various flu strains, even mild forms of season influenza, slowing down surveillance and patient diagnosis. Two types of bird flu, H3N2 and H5N6, have claimed large numbers of chickens and domestic birds in South Korea and the United States this year, and have spread to domestic cats. Last year, U.S. poultry producers and government agencies spent some $4 billion trying to control the spread of the viruses in livestock, and the mass cullings of flocks pushed egg prices to record highs in the United States.

There are some hopeful, but not definitive, signs that people who had the H1N1 swine flu that swept across the world in 2009 are more likely to survive H7N9 infection, perhaps because of a form of partial immunity, but old stockpiles of H1N1 vaccine will not prevent infection.

In laboratory studies, mice that have survived H7N9 infection make antibodies that can be used to treat other infected animals. These findings, however, are purely experimental and are , not of practical use for humans. Experimental H7N9 vaccines have been developed, but none have been commercially produced. Though the virus has circulated in Asia for years, no significant countermeasures, either for treatment or prevention, have been manufactured and stockpiled in any country.

Though the virus has circulated in Asia for years, no significant countermeasures, either for treatment or prevention, have been manufactured and stockpiled in any country.

Across Asia, authorities are scrambling to identify infected birds and slaughter exposed flocks to stem the spread of H7N9 and other flus. Several Chinese cities, including Changsha, the capital of Hunan province, have closed their poultry markets in response to the outbreak.(Such a measure was first taken in 2003, to stem the tidal wave of a different deadly virus, SARS, which spread from live market civets to people.) But all over Asia, consumers purchase live animals, which they slaughter in their homes and restaurants. The preference is based both on culture and the lack of adequate home refrigeration for safely storing supermarket-purchased packaged meat.

No medical innovations have been found to treat the H7N9 virus, even though it has been a threat to birds and people for at least five years.  Control measures are no different than they were in 2013.  Authorities have yet to develop a rapid, point-of-care diagnostic to identify H7N9 infections in people, including asymptomatic carriers, should they exist, so population health measures remain crude. If there were an outbreak, everybody presenting with respiratory problems and high fevers would be presumed an H7N9 case, regardless of whether they were actually infected with the virus.

For now, international authorities can aid public health leaders in China and other affected nations in their efforts to limit spread within bird flocks and track human cases. An influenza pandemic can only occur if the virus acquires the genetic capacity to infect the upper human lung and spread, via coughing and sneezing, from one person to another. University laboratories in Madison, Wisconsin, and in Rotterdam have, over the last few years, deliberately forced mutations to allow mammal-to-mammal spread. Their controversial work identified that fewer than five molecular changes in the viral genetic material would be sufficient, suggesting such an event is possible in nature.