Saudi Arabia’s incursion into Yemen reflects a new foreign policy that assertively presses Saudi claims in the Middle East and even uses its own armed forces to ensure its interests. After centuries of relying on external empires—first British and then American—to safeguard its territory and protect its regional interests, the House of Saud is beginning to rely on its own resources. It is hard to see what role, if any, the United States has in this evolving foreign policy. As the Kingdom charts its future, the alliance that was once the core of Saudi international orientation is no longer much of a consideration.

To be sure, there is a U.S. role in Yemen, in terms of providing intelligence information to the Saudis and supporting their efforts diplomatically. Yet given the scale of disagreements between the two sides on central issues such as how to intervene in the Syrian civil war and the nuclear negotiations with Iran, Saudi Arabia is no longer tethered to the American alliance. The implications of this for a region undergoing a violent transformation are momentous. 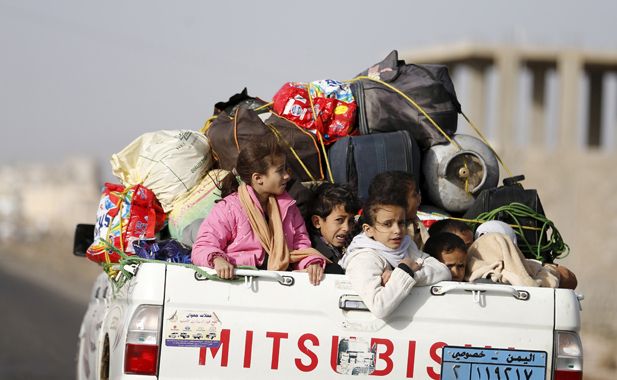 It is often forgotten that the history of the U.S.-Saudi alliance has hardly been a placid one. The alliance is a long-standing one originating in the early twentieth century. American petroleum firms were critical in the discovery of oil in the Saudi desert that transformed the Kingdom into the energy giant it is today. Still, there has always been an element of incongruity in the relationship between an austere Islamist monarchy and a liberal democracy. And the Saudis routinely doubted U.S. resolve and its commitment to regional stability.

In 1958, the rise of radical republics and militant revolutionaries buffeted much of the Middle East. Pan-Arabism and its patron saint, Gamal Abdul Nasser of Egypt, seemed to be on the rise. The conservative governments of Jordan and Lebanon were on the brink of collapse while the monarchy in Iraq was actually decapitated. The Saudis implored the United States to intervene militarily with the same vehemence as their calls for intervention today in Syria, but with limited effect. In 1979, when the Shah’s regime in Iran was overthrown, the Saudis were as angered with the United States as they were when it stood by and watched Hosni Mubarak’s government collapse in Egypt in 2011.

In the aftermath of the 9/11 tragedies, Saudi Arabia’s relationship with radical Islamists and its attempt to propagate its austere vision of Islam throughout the Muslim world came under scrutiny. Financial ties between al-Qaeda and Saudi-based individuals and charities became a source of contention between the two countries.

However disagreements in this relationship are hardly new, and the alliance always held together. During the Cold War, the two sides were united in trying to prevent the Soviet Union’s inroads into the Middle East. A vehemently anti-Communist Saudi Arabia joined the U.S. containment effort and did much to prop up the American presence in the region. The Saudis were instrumental in supporting anti-Soviet Islamist guerrillas in Afghanistan, helping defeat the Soviet army and scoring an important Cold War victory for the West.

In the 1990s, the specter of Saddam Hussein haunted the Saudis as much as the Americans. The Iraqi dictator undertook a disastrous invasion of Kuwait in 1990 and had to be forcefully expelled by a U.S.-led coalition that received considerable Saudi support. In due course, even the war on terror caused the monarchy and the United States to come together to stamp out a common threat. All these overlapping interests caused many high-ranking Saudi officials to call for sustaining the alliance with the United States despite occasional complaints about American resolve. In the end, the argument went, the two powers agree on more issues than they disagree on.

Today, the Middle East is once more dividing against itself, and this time, those divisions are underwritten by sectarian identities. A new Saudi-Iranian cold war, marked by support for various proxies, is descending on the region and is playing out in Bahrain, Iraq, Lebanon, Syria, and most recently and dramatically, Yemen. In many ways, this is a zero-sum game, not unlike the U.S.-Soviet conflict. Iran is pressing ahead with fortifying the new Shia gains in Iraq while buttressing Bashar al-Assad’s regime in Syria and Hezbollah forces in Lebanon. And Iran is not beyond mischievously intervening in Saudi Arabia’s backyard with its attempts to extend its writ in Bahrain and Yemen. The Revolutionary Guard contingents operating in Iraq and Hezbollah “shock troops” in Syria are among the instruments of Iranian subversion.

Pivoting Away from the Mideast

As the Middle East undergoes this violent and volatile transition, the United States seems determined not to become further involved in the region’s conflicts. The Obama administration has proudly unveiled its pivot to Asia—the continent that will define the twenty-first century. A rising China and the growing economies and traditional rivalries of Asia are far more important to Washington than the Middle East and its ancient blood feuds. As the region’s oil lessens in importance for the workings of the global economy, Washington no longer seems concerned about loosening the many knots of the Middle East. And its counterterrorism efforts in the region can seemingly be waged from the air with unmanned drones controlled from far away.

In the absence of the U.S. sentry, the Sunni Arab states are coming together to wage the new Middle Eastern cold war. Saudi Arabia is the focal point of the new alliance as its wealth is seeking to team up with Egypt’s size to contest Iran’s growing power. Cairo has pledged support for the Saudi war effort in Yemen, and while it remains to be seen whether there is much military muscle in this arrangement, the Sunni states are beginning to come together to resurrect their influence.

However, in this new cold war, the Saudis will have to use their military in a manner that they had not contemplated before. In the past four years, the Saudis have already intervened in two countries—Bahrain and Yemen—and more such interventions may soon be the order of the day. This means that the Saudi military has to undergo its own modernization with creation of a more capable officer corps and a standing army larger than the coup-conscious House of Saud had previously considered safe.

Hovering over all this are Saudi nuclear calculations. In recent years, the Saudis have expressed interest in nuclear technologies and even establishing a domestic enrichment infrastructure matching that of Iran. Atomic weapons may yet provide an important deterrent capability for a sparsely populated state with considerable wealth. Should it possess this weapon, then Saudi Arabia can ensure that its territory will not be molested by larger neighbors coveting its oil.

In the past, America’s security umbrella had provided the necessary reassurance, obviating the need for such measures of self-reliance. This may no longer be the case. It is important to stress that in the new Middle East, the Saudi nuclear calculus may no longer be contingent on what happens to Iran’s nuclear program. It was once thought that Saudis would try to match Iran’s capabilities, but increasingly, nuclear arms may make sense for the monarchy irrespective of what happens on the other side of the Persian Gulf.

The twentieth century was a bloody, tumultuous time for the Middle East, and this century will likely to be even more turbulent. The Middle East today is a place of emerging failed states, arms races, and sectarian conflicts. This time, the region may not have the tranquilizing impact of U.S. power; local states will likely press on with their own conflicts in their own way. The House of Saud has decided to make its own adjustments in this turbulent region and discard its traditional defense doctrine that relied much on the U.S. presence. As the monarchy looks at the region, uneasy times lie ahead.