Nigerias elections could be a turning point for Africa. If they are free, fair, credible, and if the results are accepted by most of its citizens, the country will become a beacon of hope for the continent, where democratic roots remain shallow. If the results are not credible or if they exacerbate festering religious and ethnic tensions, the consequence could be violence and political uncertainty at home and erosion in the credibility of democratic practices throughout the continent. Instability in Nigeria could invigorate the Islamist insurgency Boko Haram. Post-election upheaval could trigger a larger humanitarian crisis, potentially drawing in foreign militaries and humanitarian organizations. The elections could follow either trajectory. 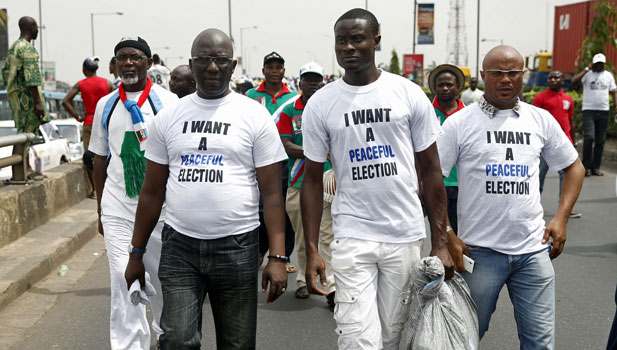 Nigeria plays an outsized role in Africa. It has the largest economy and population, is the largest oil exporter, and it is vocal in its claims to continental leadership. Its population of 183 million, roughly one in five sub-Saharan Africans, is divided into more than 350 different ethnic groups and evenly between Muslims and Christians. The Boko Haram insurgency identifies with the self-described Islamic State and seeks to destroy the secular Nigerian state, its Christian president, and traditional Islamic establishments that support it and benefit from it.

On a separate front, there is an incipient and unrelated insurrection in the Niger delta that has been calm following an amnesty established by former President Umaru Yar’adua. The delta could be a Nigerian pain point for another reason. The region’s oil exports are responsible for about 70 percent of the government’s revenue, and falling international crude oil prices have hit the federal budget, devalued the currency, and sent the Lagos stock market into a tailspin.

Against this backdrop of extraordinary challenges, the March 28 presidential elections will be the first since the restoration of civilian government in 1999 in which the outcome is not a foregone conclusion. Up to now, competing and cooperating elites have run Nigeria according to unwritten rules that included power alternation between the broadly Muslim North and the Christian South. The aim of these governments has been to divvy up among elites national oil revenues, the country’s largest source of wealth, and not to improve economic or social development. The system has operated in a context of extravagant corruption.

In this context, through horse trading, elites reached a consensus on the presidency and have insured that their choice was elected, through rigging as necessary. In the face of Boko Haram attacks, falling oil prices, and a weak government in Abuja, this consensus has fractured, making the upcoming elections a genuine contest for the first time. The 2015 elections are a rematch of 2011, but then the consensus still held. The incumbent president, Goodluck Jonathan, a Christian from the south, is the candidate of the Peoples Democratic Party (PDP), which has governed since 1999. As in 2011, his principal opponent is Muhammadu Buhari, from the new All Progressives Congress (APC). Buhari is a Muslim from the North and was Nigeria’s head of state from 1983 to 1985, when the country was under military rule.

"The March 28 presidential elections will be the first vote since the restoration of civilian government in 1999 in which the outcome is not a foregone conclusion."

In his campaign, Jonathan points to his economic reforms, particularly an initiative to stabilize the country’s electricity supply, and his restoration of the railways. He claims that the Nigerian military is defeating Boko Haram and he takes credit for Nigeria now having the largest economy in Africa. His followers have blatantly appealed to Christian identity.

Buhari has campaigned against corruption and faults Jonathan for the government’s inability to protect its citizens against the depredations of Boko Haram as well as other criminal activity, including rampant kidnapping. His followers, too, appeal to religious identity. Broadly speaking, Jonathan is the candidate of the status quo while Buhari is for “change.” Anecdotal evidence and polls, inadequate though they are, indicate a substantial Buhari lead throughout the country, even in some sections of the predominantly Christian south. But, Jonathan’s government has access to virtually unlimited amounts of money for campaigning purposes, and disproportionate, if not absolute, control over the electoral machinery.

The Challenge of Credible Elections

There is a complicated, constitutional formula for presidential election. A victorious candidate must win the most votes and a minimum of 25 percent of the votes in two-thirds of the thirty-six states plus the Federal Capital Territory of Abuja. In the past, rigging has been employed to ensure that the presidential candidate choice of Christian and Muslim elites (who compete with each other but also collude) meet the required quarter of votes in two-thirds of the states. Should no candidate satisfy these constitutional requirements, there is a runoff between the top two. This has never happened. Yet, because of the apparent closeness of the election, it could happen this time. The constitution requires that a runoff take place within a week, a logistical challenge that would appear impossible to meet.

There were elections in 1999, 2003, and 2007. Each was worse than its predecessor, and electoral participation plummeted. Balloting improved in 2011 under a new, reformist chairman of the Independent National Electoral Commission (INEC), Attahiru Jega, though Nigerian civil observers still identified rigging. When the results were announced, the North saw the greatest upsurge in violence since the 1967–70 civil war (the Biafra war).

Despite being Africa’s largest economy, Nigeria is a poor country with crumbling infrastructure, making national elections difficult to carry out. According to INEC, there are 68,833,476 eligible voters. Jega says he expects to deploy 700,000 polling officials on March 28, in addition to security personnel, mostly from the army and the police. (Though the police are formally charged with maintaining security, the army is usually heavily involved.) This year’s electoral register is more accurate than the one used in 2011, and registered voters are being issued Permanent Voter Cards (PVCs) to be swiped at Smart Card Readers to verify voter identity. Jega said as of March 17, 81.8 percent of registered voters had collected their PVCs and that provisions have been made for the large number of internally displaced persons to receive their PVCs and to vote. Jega says that these steps will significantly enhance the credibility of the elections.

Election credibility must be the watchword, as the country has never been so polarized or the major parties so suspicious of each other. The PDP and the APC have already accused each other of plotting election-day fraud. Public confidence in the election process is also low, even if support for the principles of democracy appears to be unabated.

Preparing for the Aftermath

APC spokesmen have said that if INEC declares Jonathan the winner of less-than-credible elections, it will establish a “parallel government,” which it has not further defined. Buhari has said that he will not return to the courts in election disputes, because he did so in 2003, 2007, and 2011, only to have the courts favor the incumbent, in part by throwing out the evidence he presented. For their part, some of Jonathan’s supporters from the Niger delta have said that if he is “deprived” of the presidency, they will renew their attacks on the oil infrastructure.

There will be pressure in the international media for near-instant judgment on the quality of the election and who won. There will election observers from the Commonwealth, the Africa Union, the European Union and numerous others.  However, it is Nigerian civil organizations that will be best placed to make such an assessment and influence public perception of the vote because they are active throughout the country. It will be several days before even partial answers to such questions will be possible. U.S. and other foreign policymakers should resist making premature public comments on the quality and results of the elections.

Relevant African regional organizations, such as the African Union and the Economic Community of West African States, are already engaged with the regional threat posed by Boko Haram. In the event of a major political crisis in Nigeria following the March 28 voting, they may expand their focus, as both regional organizations are strongly opposed to military coups. Their capacities to respond to a Nigerian crisis remain unknown, however, as Nigeria has traditionally led both group’s regional activities.