For Africans, the most significant aspect of President Obama’s trip may be that he actually made it, directing new U.S. attention to a continent that too many Americans tend to see as marginal. In his first term, the president did little to counter this by spending less than twenty-four hours in one African country, Ghana. However, with this visit, the president highlighted African successes in governance, democratization, and the mobilization of economic opportunity. His Power Africa initiative, which seeks to light up the continent, also has the potential for mobilizing interest among the American business and policy communities. So does his Trade Africa initiative. For a larger American audience, Obama’s visit to the Door of No Return on Gorée Island (Dakar), through which thousands of Africans boarded slave ships for the New World, underscored the message that Africa helped make America what it is today. From such perspectives, the trip may have been as important for Americans as for Africans. 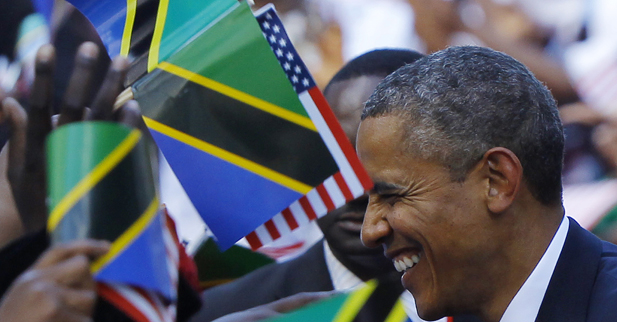 But beyond the photo ops, was the visit positive for Africa and the president? There were two potential shadows as the trip approached. The first was the impending death of anti-apartheid icon Nelson Mandela. The second was an unfavorable comparison between president George W. Bush’s extensive attention to Africa and the more limited one of his successor.

Small issues can trip up a presidential visit, and Obama did not entirely avoid them. In Senegal, the president took the opportunity to stress that gay marriage, which is anathema in largely homophobic sub-Saharan Africa (except in South Africa, where it is legal), is an important civil rights issue. In reply, Senegal’s president said that his country is not prepared to decriminalize homosexual relationships, a move that the African media delighted in portraying as the Senegal "David" standing up to the American "Goliath." Similarly, heated public demonstrations in South Africa over controversial U.S. intelligence gathering, Guantanamo, and drones, could have been problematic. But Obama largely defused the issue when he said that he was not prepared to "scramble the jets because of a twenty-nine-year-old hacker." Moreover, media in the United States and Africa have speculated that the purpose of the Obama visit was somehow to counter the Chinese, in echoes of Cold War competition. Obama did not take the bait. Instead, he said that the United States welcomed Chinese interest in Africa, as well as that of India or Brazil.

If the symbols worked well and pitfalls were largely avoided, what of the "substance" of the Obama visit? The president unveiled Power Africa and Trade Africa, two major initiatives that will require resources from a cash-strapped Congress. According to the White House Fact Sheet, more than two-thirds of sub-Saharan Africa’s people lack access to electricity; in rural areas, the share is 85 percent. To achieve universal access by 2030, the International Energy Agency estimates that $300 billion in new investment will be required. Power Africa aims to double the number of people with access to electricity in sub-Saharan Africa. The initiative takes a holistic approach to power production, emphasizing domestic sources such as oil and gas reserves, and capturing geothermal, hydro, wind, and solar energy. The initiative will also work on increasing the infrastructure for power generation and transmission and expanding power grids. The first partner countries for the initiative are Ethiopia, Ghana, Kenya, Liberia, Nigeria, and Tanzania. Funding is expected to come from a variety of sources, including $7 billion over five years from U.S. government agencies, as well as the private sector, where commitments already stand at more than $9 billion.

Trade Africa will emphasize intra-African trade, concentrating first on the East African Community, which includes Burundi, Kenya, Rwanda, Tanzania, and Uganda, and increased exports to the United States. The initiative will also encourage regional integration to streamline trade across borders, and trade competitiveness through public-private partnerships.

In addition, President Obama committed to the extension of Bill Clinton’s African Growth and Opportunity Act (AGOA), which allows African products easy entry into the United States. The upcoming AGOA forum in Addis Ababa in August will focus on bolstering trade between the United States and Africa, and lay the groundwork for AGOA renewal by 2015. He also introduced the Washington Fellowship to expand the Young African Leaders Initiative launched in 2010. The Fellowship will open opportunities for five hundred African young people to study and intern in the United States each year. These initiatives, which are likely to be uncontroversial and low-cost, will build directly on a program already in place that has successfully identified talented future leaders. If not as dramatic as the Bush administration’s PEPFAR, President Obama’s package of Power Africa, Trade Africa, and an expanded Young African Leaders Initiative, if achieved, could leave Africa a better place.