South Africans will vote for municipal and district officials on August 3, and, as in other democratic countries, these elections will also serve as a referendum on the central government. In South Africa’s case, voters will be assessing the record of the scandal-plagued African National Congress (ANC) administration of President Jacob Zuma and the party’s success (or failure) in addressing the social and economic consequences of three hundred years of white supremacy.

More From Our Experts
Michelle Gavin
PEPFAR at Twenty
Christopher M. Tuttle
Two Years After January 6, Some Reasons for Optimism

The discrepancy between the country’s remarkable democratic evolution since the end of apartheid and the parallel but slower rate of economic and social change is a source of growing discontent, particularly in the largely black, lower-income townships. Though the income and wealth gap between whites and everybody else has decreased somewhat since 1994, overall income inequality has increased. Among blacks inequality has risen. In 1993, South Africa’s Gini coefficient was 0.59; in 2011, it was 0.63 (0 represents complete equality and 1 complete inequality). 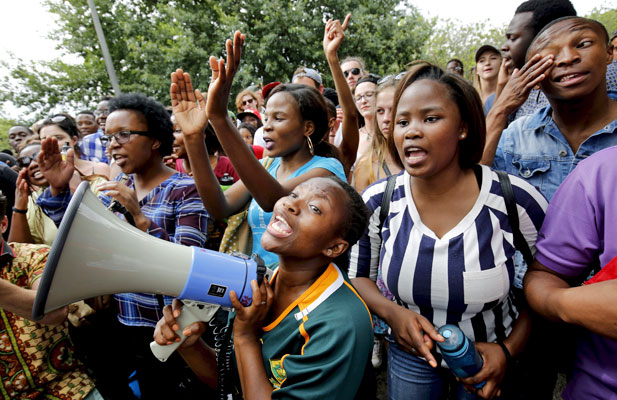 A few South Africans are rich, but many are poor, even though the economy grew on average about 3 percent a year for the first sixteen years the ANC was in office (in early 2016 the country was in recession). The ANC has instituted allowances that reduced the numbers of South Africans living in extreme poverty to 10.2 million in in 2011, down from 12.6 million in 2006. Those living in moderate poverty fell from 27.1 million in 2006 to 23 million in 2011. Nevertheless, the two categories together amount to more than half of the country’s population (South Africa’s population was 53 million in 2013), and a majority of those designated as living in poverty are black or coloured (the South African term for persons of mixed European, African, or Asian ancestry). By contrast only 0.8 percent of whites live in poverty.

" The discrepancy between the country’s remarkable democratic evolution since the end of apartheid and the parallel but slower rate of economic and social change is a source of growing discontent."

Frustration over persistent poverty, growing income inequality, and, more generally, the slow rate of economic and social change have sparked widespread protests that have occasionally turned violent. This disillusionment may contribute, albeit indirectly, to the country’s high crime rates. Anger is part of the context of the August vote and makes it more difficult than in the past to predict an overwhelming ANC majority in the townships.

More From Our Experts
Michelle Gavin
PEPFAR at Twenty
Christopher M. Tuttle
Two Years After January 6, Some Reasons for Optimism

South Africa has been a constitutional democracy based on the rule of law since 1994. The powers of government at all levels are limited by a constitution with some of the world’s strongest protections of human rights. Elections are regarded by outside observers as comparable in quality and credibility to those in mature democracies, such as the United States and Japan, and polls show that South Africa’s constitutional democracy enjoys wide support from all racial groups. Formal racial segregation has been entirely dismantled, and black South Africans, who comprise 80 percent of the population, are present in all aspects of national life, from formerly all-white universities to country clubs. But voting behavior continues to be strongly influenced by racial identity, and the ANC, though multiracial, is the traditional party of the black majority. It has governed the country without interruption since 1994.

Disparities in health and education remain stark between the white minority and the black majority. For many blacks, access to education and health services has improved little since apartheid. In 2015, black life expectancy at birth was 56.4 years and for whites it was 72.6. HIV prevalence among black South African adults was 20 percent, among whites, it was about 2.5 percent. And though non-whites make up a majority of students at many elite academic institutions, blacks are still demographically underrepresented. For example, roughly a quarter of University of Cape Town (UCT) students are black. Whites, by contrast, represent 9 percent of South Africa’s population but comprise nearly a third of UCT’s student body. Put another way, a large percentage of whites have access to tertiary education or its equivalent. The percentage of the black population with such access remains small.

"For many blacks, access to education and health services has improved little since apartheid."

With access to good education and health services, South African whites acquire the skills necessary to participate in a modern economy, and their better health means lower levels of absenteeism. Accordingly, whites have lower levels of unemployment. In 2014 the white unemployment rate was 8.1 percent, whereas among blacks it was 28.3 percent. Unemployment was high in 2014 because of South Africa’s slow recovery from the 2008 recession; for example, in 2008, before the recession hit, white unemployment was 4.1 percent. Among young black township dwellers, where the quality of education and health services is particularly poor, unemployment levels often reach 50 percent.

South Africa is a middle-income country where wealth is concentrated in the hands of the white minority and a small number of well-connected blacks. The country’s two wealthiest men, both of whom are white, have a combined net worth that is equal to the wealth of the country’s poorest 50 percent of the population, according to the UK-based advocacy group OXFAM (PDF). French economist Thomas Piketty estimates that 60 to 65 percent of South Africa’s wealth is in the hands of 10 percent of the population; and within the top 1 to 5 percent, 80 percent are white. The average wealth of blacks is estimated to be only 5 percent of the white average. This is rooted in apartheid: whites have been able to accumulate capital and pass it down for generations. Capital accumulation for blacks was rare and difficult under apartheid, and little was available for inheritance.

Inequality and the ANC

In an effort to address inequality, the ANC has devoted nearly a quarter of the national budget to education (compared to 6 percent for defense). It has successfully consolidated the nineteen separate school systems inherited from apartheid, trying to eliminate the racially mandated duplication of facilities. Yet the challenges of undoing the “Bantu” education system of apartheid are formidable (Bantu education refers to the grossly under-resourced education made available to blacks under apartheid.) The question of language is one example. There are eleven legal languages in South Africa, and only 11 percent of the population, a large percentage of whom are white, speaks English as a first language. English is the language of business at home and abroad, yet there is no consensus as to whether primary instruction be in English or in the student’s first language.

The ANC has long supported Black Economic Empowerment (BEE), an affirmative action policy that has evolved over the years and seeks to create opportunities for black entrepreneurship and employment. These policies have promoted the emergence of a black middle class, particularly through public-sector employment. However critics say BEE mostly benefits a small elite connected to the ANC. In all its forms, BEE has had relatively little impact on poverty in the townships or the rural areas.

Though a majority of South African blacks continue to support the ANC, there is growing concern, particularly among media commentators of all races and many township residents, virtually all of whom are black or coloured, that the ANC has grown away from its popular, democratic roots. To both, the party that led the struggle against apartheid has been co-opted or otherwise participates in a political economy characterized by gross disparity between the rich and the poor. Township riots, often over poor service delivery by the local authorities, are increasingly common and political in focus. Riots in the township of Tshwane, in Pretoria, in June 2016 left at least one person dead and large-scale property damage. The riots were reportedly the result of an intra-ANC dispute: national party authorities had tried to impose a mayoral candidate against the local chapter’s wishes and locals protested on behalf of their local elected officials.

Nevertheless, racial identities continue to drive voting behavior, and so long as elections are essentially a racial census, the ANC will be the party of government. Blacks vote overwhelmingly for the ANC; whites, coloureds, and Indians vote for the opposition Democratic Alliance (DA). The ANC is especially strong in rural areas, where there is fear that the DA would abolish a system of government allowances that has reduced the numbers of the very poor. Zuma is a highly effective politician with respect to this rural constituency, not least by emphasizing his Zulu cultural identity—Zulus make up about a quarter of South Africa’s population.

"The ANC has been the party of black aspiration. It remains to be seen whether the voters will punish it in August elections."

The black oligarchs and the emerging black middle class are tied to the ANC. Hence, rage among the poor is often directed against the local ANC leadership, as it was in Tshwane. The Economic Freedom Fighters (EFF), a radical political party that uses anti-white rhetoric and is led by firebrand Julius Malema, exploits this anger as it seeks to expand its political power and influence, especially at the expense of the ANC.

The Future of the ANC

South Africa’s political landscape is in flux. The country is urbanizing rapidly, reducing over time the strength of the ANC’s rural constituency. The “born frees,” black, middle-class South Africans born after 1994, appear to be less swayed by the ANC’s association with Nelson Mandela and the freedom movement than their parents are. They are also more vocal in their opposition to corruption, but their voter participation rate is low, as it is among that age cohort in other democracies. The DA is reaching out to black voters, and is now led by a black man, Mamusi Maimane, a thirty-six-year-old member of parliament. It is the party of government in the Western Cape and Cape Town, generally regarded as the best-governed part of South Africa, lending the DA some credibility among the urban, black middle class, despite its reputation as a "white" party.

In preparation for the August elections, the DA has targeted campaign resources toward winning city council elections in the cities of Johannesburg, Tshwane, and Nelson Mandela Bay (Port Elizabeth), and most commentators think their candidates have some chance of success (municipal councilors in turn elect mayors).

Whatever the outcome of August’s elections, the powers of any South African government to bring about radical social change is limited by constitutional checks and balances, just as it is in the United States. Hence, the formal structures of white supremacy could be dismantled quickly, but the effects of three centuries of white supremacy pervade, as they do in the United States.

The ANC has held power for more than twenty years. It no longer represents change from the status quo, and its leadership is mired in scandal. If the ANC does poorly in the August elections, pressure within the ANC will mount for Zuma to go. However, the ANC has been the party of black aspiration. It remains to be seen whether the voters will punish it in the August elections, or whether electoral choice will continue to be largely determined by race.

Oktavia Catsaros of the Kai Kai Group contributed to this report.