The primary systems of all three legs of the U.S. nuclear weapons triad are nearing the end of their service lives and are slated for replacement. As a result, the United States is preparing to upgrade nearly every bomber, submarine, missile, and warhead in the arsenal in the next decades. This unfortunate coincidence will drive the cost of the arsenal 75 percent higher in the next ten years than the last, and up to $1 trillion over the next thirty years.

In recent weeks, the nuclear spending cliff has gained increased attention and has left observers at home and abroad wondering whether the plans—which arise from disparate agency requests to replace each system individually—conflict with the administration’s promise to work toward a world without nuclear weapons. The U.S. nuclear arsenal is tasked with deterring potential adversaries and reassuring allies and partners around the world, but this in itself does not set the size or the shape of the arsenal.

Anxious to pare down next year’s budget request to Congress, the White House is reviewing the spending plans. Advocacy groups, sensing an opportunity for reductions, are coalescing around a set of steps to curtail the programs but have not recommended major changes to nuclear force structure. 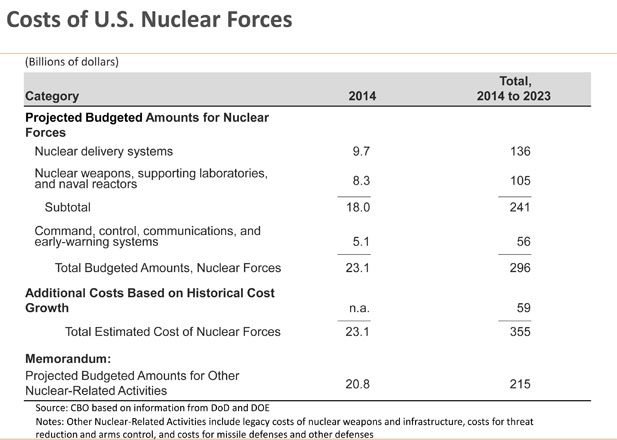 The conclusions of the administration’s review will determine its legacy on nuclear issues. Thus far its record has been deeply ambivalent. For instance, Senate Republicans succeeded in exacting high modernization budgets in exchange for approving the 2011 New START treaty. The administration’s ambition to pursue a second arms control treaty—which would reduce each country’s deployed strategic arsenal by another third, to one thousand weapons—has stalled as U.S.-Russian relations have deteriorated. The administration’s review of nuclear spending is not only a unique opportunity to reshape the arsenal; it may also be Obama’s last chance at influencing arms control.

Though the current force of B-2 and B-52 strategic bombers is not expected to begin retiring until 2040, the Air Force has undertaken a program to build a new strategic bomber. The first bombers are planned for a conventional role and it is only later that a nuclear capability would be added, a modification the Air Force has suggested it might delay. Expected to enter service ten years from now, the Pentagon estimates that one hundred of the Long Range Strike Bomber (LRS-B) aircraft will cost some $55 billion. Though the Air Force officially began a competition to select a contractor for the bomber in July 2014, it is possible that research and development work has already been funded using classified budgets and also possible that cost will rise significantly.

The Air Force also plans to add a nuclear capability to the F-35 stealth fighter. Far behind schedule and over cost, the program has normalized in recent years. However, the nuclear modifications, estimated to cost some $350 million, have been delayed until 2022. At the same time, the Air Force is also planning to replace its nuclear-armed Air Launched Cruise Missile (ALCM), which allow bombers to strike defended targets without entering enemy airspace.

The Navy’s fourteen Ohio-class ship submersible ballistic nuclear submarines (SSBN) are set to begin retiring in 2027 at the rate of about one per year. The Ohio replacement program, or SSBN(X), plans to build twelve submarines beginning in 2021 to maintain continuous at sea deterrence. Technology development for the submarine began in 2011 with design of the missile compartment. This year, the program plans to complete the boat’s initial design. The cost of the replacement program is variously estimated between $77 and $102 billion, or as much as $7.2 billion per boat (half the price of a new aircraft carrier). Because the program is expected to consume up to half of the Navy’s shipbuilding budget for the next three decades, the Senate has acceded to the creation of a separate "National Sea-Based Deterrence Fund" to fund construction of the boats. In addition, the Navy will have to extend the life of the Trident II D-5 missile carried by the submarines and to begin to develop a replacement system after 2030. The Navy has already made several modifications to the Ohio replacement plans to reduce costs, yet recent experiences in naval shipbuilding suggest that the cost overruns are a possibility.

The Air Force is reducing its deployment of 450 Minuteman III intercontinental ballistic missiles (ICBM) to the 420 allowed under New start. Having recently refurbished the Minuteman missiles to ensure that they will remain in service until 2030, the Air Force is beginning its effort to find a replacement. Rather than develop an all new missile, the current plan looks to upgrade the Minuteman with a new rocket motor and solid-state guidance system to lend increased accuracy over the current force. No cost estimates have yet been prepared for replacing of the missiles, but the ICBM force is relatively inexpensive to maintain and upgrading the Minuteman with existing technology will be substantially cheaper than bomber and submarine modernization plans. The modest scale of ICBM replacement is no accident: rising costs would likely to provoke calls to maintain the existing missiles or retire the force altogether. Already, a 2014 RAND study commissioned by the Air Force found indefinite sustainment of the current force to be by far the cheapest option, amounting to $75 billion through 2050.

In addition to major delivery vehicles, several other elements of the U.S. nuclear enterprise are up for modernization. Four classes of nuclear warheads are due to undergo comprehensive life extension programs in the next ten years to ensure their safety and surety. Technicians will replace the non-nuclear components of the nuclear warheads used in gravity bombs, cruise missiles, SLBMs, and ICBMs. The refurbishment efforts also include an ambitious plan to produce a common warhead for land and sea-based ballistic missiles. Furthermore, the Department of Defense plans to upgrade the complex system of satellites, radars, aircraft, and networks that transmit information to and orders from the president in a crisis, an undertaking the Pentagon estimates will cost $40 billion through 2023. Lastly, the Department of Energy is planning several major new facilities to disassemble plutonium warhead cores, research plutonium chemistry, and enrich uranium on an industrial scale. On top of these costs related to the arsenal, the United States incurs several related expenses, including for missile defense, environmental cleanup of nuclear sites, and global nonproliferation intiatives.

The administration’s review of nuclear spending is not only a unique opportunity to reshape the arsenal; it may also be Obama’s last chance at influencing arms control.

As a result of the modernization plans, the cost of the nuclear arsenal is set to expand precipitously even as the overall defense budget is declining to meet the challenges of sequestration. There is a growing consensus among former and current officials that this plan for recapitalizing the nuclear triad is unaffordable under current budget constraints. Though nuclear spending is formally exempted from sequestration, the military services are already finding that the scale of nuclear modernization endangers other priorities. And if the recent history of major procurement projects is any indication, each of the official estimates cited above is in distinct danger of delay and cost overrun.

Outside of government, calls to pare down the modernization package will continue to increase. Few have tried to rekindle the earlier debate over whether to cut a leg of the nuclear triad—an approach the Obama administration rejected—but arms control groups are coalescing around a more modest set of changes that could limit the spending increases while maintaining the existing force structure:

- Reduce the number of submarines from twelve to ten or eight;
- Delay bomber procurement until B-52 retirement;
- Cancel the air-launched cruise missile;
- Eliminate the nuclear mission from tactical fighters;
- Modernize the existing ICBM force gradually and indefinitely.

In Congress, Sen. Ed Markey (D-MA) and his allies have proposed a similar but more extensive plan.

Without a careful and concerted effort to address the spending packages, nuclear force structure will be determined by congressional infighting or by whichever programs happen to face major cost overruns. The chance to reshape the nuclear arsenal is an unprecedented opportunity and should lead to a national debate. Politicians, strategists, and the public should together determine the nuclear force required to meet the country’s strategic needs and comport with the administration’s commitment to seek a world without nuclear weapons.

Absent clear moves to reduce the nuclear arsenal, foreign governments will likely take these plans as a sign that the administration is backing away from the president’s disarmament pledge. With the international community planning to gather to review the Nonproliferation Treaty, to negotiate on a nuclear-free zone in the Middle East, and to draft a ban on nuclear weapons in Vienna next year, a sign of commitment to disarmament could assist American nuclear interests significantly in the coming years.