South Korean President Park Geun-hye will meet U.S. President Barack Obama at the White House on October 16 to make up for a summit that was postponed because of the Middle East Respiratory Syndrome (MERS) outbreak in South Korea last June. The meeting comes at a time of troubling new provocations from North Korea and amid momentum on regional trade that is a critical part of Washington’s strategic pivot to Asia. The summit will be watched closely for signs of effective collaboration on both of these fronts, as well as for how much the two sides expand cooperation in so-called “new frontier” areas. 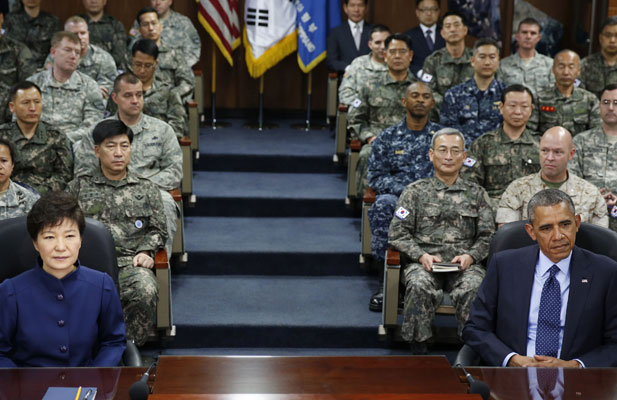 More From Our Experts
Scott A. Snyder
How a New U.S.-South Korea Deal Can Deter the North Korean Nuclear Threat
James M. Lindsay
Ten Facts About the State of the Union Address
Inu Manak
Boosting Trade, the Key to Stronger Indo-U.S. Ties

North Korea’s persistent, belligerent rhetoric and unchecked efforts to develop nuclear and missile capabilities will top the Obama-Park summit’s agenda. The immediate challenge is how to disrupt a pattern of North Korean long-range missile and nuclear testing, which has occurred every three years since 2006.

The immediate challenge is how to disrupt a pattern of North Korean long-range missile and nuclear testing that has occurred every three years since 2006.

In Washington, Park will discuss the August agreement between Seoul and Pyongyang to defuse border tensions. Under the deal, the South ended its propaganda broadcasts, and the two Koreas pledged to proceed with inter-Korean family reunions. Some analysts have speculated that the North has resumed inter-Korean cooperation to divide U.S. and South Korean responses to its planned nuclear and missile tests.

More From Our Experts
Scott A. Snyder
How a New U.S.-South Korea Deal Can Deter the North Korean Nuclear Threat
James M. Lindsay
Ten Facts About the State of the Union Address
Inu Manak
Boosting Trade, the Key to Stronger Indo-U.S. Ties

Interactions with China have emerged as an important component of U.S.-Republic of Korea (ROK) cooperation. Park’s presence on the rostrum at China’s September 2015 military parade has raised eyebrows among some U.S. officials; South Korea was the only major democracy or U.S. ally to attend the event. Nonetheless, there is little evidence of serious friction over the issue between Washington and Seoul.

U.S. policymakers do not view South Korea’s foreign policy in zero-sum terms. On the contrary, the U.S.-ROK alliance, including a twenty-eight-thousand-strong troop presence and a commitment to the defense of South Korea, bolsters South Korea’s ability to deal with China and prevents Seoul from being drawn into Beijing’s sphere of influence. Even so, Park’s participation in the Beijing parade inadvertently conveyed the opposite message. Therefore, Park should explain to U.S. audiences the rationale behind her charm offensive toward Beijing.

Similarly, the United States has sought to stabilize the Japan-South Korea relationship, and Washington is looking with great interest at the possible resumption of top-level China-Japan-Korea trilateral meetings in the coming weeks. This could provide an opportunity for Park and Japanese Prime Minister Shinzo Abe to hold their first bilateral summit since she took office nearly three years ago.

The resumption of a normal and productive relationship between the United States’ two main alliance partners in Northeast Asia is particularly important for the U.S. rebalance to Asia, the effectiveness of which depends in part on expanded cooperation among its Asian allies and partners. South Korea has set aside demands for Japan to settle their dispute over comfort women, which pertains to abuses committed during the Japanese military occupation of Korea in the 1930s and 1940s. Seoul is pursuing a two-track approach in which its cooperation with Tokyo on security and economic issues proceeds separately from discussions about history-related issues. An Abe-Park meeting could provide momentum for closer U.S.-Japan-ROK security cooperation, but only if the two leaders can agree to manage the comfort women issue in tandem with closer coordination on defense and security issues.

The resumption of a normal and productive relationship between the United States’ two main alliance partners in Northeast Asia is particularly important as part of the U.S. rebalance to Asia.

In addition, the United States and South Korea share the objectives of strengthening adherence to international norms in Asia by building stronger multilateral institutions. For instance, the United States and South Korea hold common views on nuclear nonproliferation, the use of international law to settle regional disputes, and the universal values of human rights. The United States will encourage South Korea to express its support for such measures through more active participation in the East Asia Summit. South Korea wants a stronger U.S. endorsement of President Park’s efforts to institutionalize the Northeast Asia Peace and Cooperation Initiative (PDF), which promotes regional cooperation on issues including nuclear safety, public health, and the environment.

South Korea has signaled it is considering joining the Trans-Pacific Partnership (TPP), a multilateral free trade agreement that will comprise almost 40 percent of the world’s trade, since the twelve countries currently party to it completed negotiations in October. South Korea’s interest in joining the agreement underscores the TPP’s appeal for trade-dependent countries, given that the sweeping trade agreement will set high standards for trade liberalization. The TPP outline agreement also bolsters South Korea’s confidence in the U.S. rebalance to Asia. The two countries will address sticking points in the implementation of their free trade agreement, known as KORUS FTA, including controversies over rules of origin for U.S. agricultural exports like orange juice, Korean legal requirements that financial companies store data in-country, and ensuring that new Korean regulations do not impinge on KORUS FTA provisions.

Finally, both governments are highlighting “new frontier” issues, which include public health, cybersecurity, space, and development. Cooperation on these types of functional issues was identified as a mutual goal in the 2009 U.S.-ROK Joint Vision Statement.

Last month, at the request of the Obama administration, South Korea hosted the second Global Health Security Agenda high-level meeting, following the inaugural meeting at the White House in 2014. Deepening U.S.-ROK coordination on public health was demonstrated earlier this year by South Korean contributions to the international effort to combat Ebola, and was strengthened by coordination between South Korean and the United States to address the spread of MERS.

South Korea is a natural partner for the United States in cyberspace; it is one of the most wired countries in the world and is a prime target for cyber espionage and cyberattacks from North Korea.  South Korea hosted both the International Telecommunications Union’s efforts to develop best practices for managing the Internet and an international conference on cybersecurity in 2014.

South Korea has also shown growing interest in space exploration and research. The country has collaborated with Russia on sending an astronaut into space and earlier this year pledged cooperation with India on a space launch. The United States is seen as a potential partner for space cooperation. On Park’s itinerary is a visit to NASA’s Goddard Space Flight Center, in Maryland.

Park’s government has also been raising the country’s profile in global development efforts. The latest sign of this was Park’s pledge at the UN General Assembly of $200 million to support girls’ education initiatives. This commitment echoes priorities outlined in the Obama administration’s Let Girls Learn initiative. The two countries will likely coordinate their efforts through the U.S. Agency for International Development and Korea International Cooperation Agency, which signed a memorandum of understanding in 2013.

Driven by North Korea’s expanding nuclear threats and China’s rise, the scope and depth of U.S.-ROK cooperation has expanded impressively with the Obama administration’s coordination with South Korean Presidents Lee Myung-bak and Park. With ongoing consultations between Washington and Seoul, bilateral ties are set to expand, enhancing the value of the alliance as a net producer of peace and security in Northeast Asia and the world.