Russians go to the polls in September to choose a new Duma—the first national election since the parliamentary balloting of 2011 and the presidential vote of 2012. President Vladimir Putin and his opponents know that his party, United Russia, will retain its majority. But who gets how many seats is not necessarily the most important question. When, after the votes were counted in 2011, the Central Election Commission (CEC) announced that United Russia had received 49.32 percent—widely considered a phony number—the result was an explosion of protest and anti-regime anger. Will this year’s vote reignite tensions or reinforce stability? Will it strengthen or weaken the existing system? 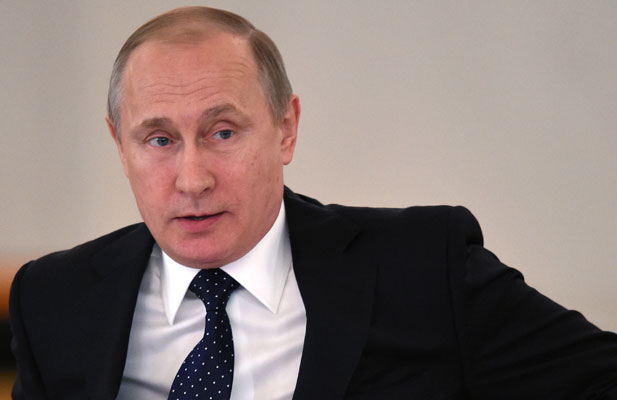 Russian President Vladimir Putin chairs a meeting of the State Council on developing the construction sector at the Kremlin in Moscow, Russia, May 17, 2016. (Photo: Vasily Maximov/Reuters)
More From Our Experts
Robert D. Blackwill
Policy Prescriptions for U.S.-China Relations
Stephen Sestanovich
Who Are Russia’s War Hawks, and Do They Matter?
Thomas Graham
Does Putin’s Gamble Make Russia’s War in Ukraine More Dangerous?

In the campaign now underway Putin finds himself in an unusual, even paradoxical, political position. Having seized Crimea in 2014 and intervened in Syria in 2015, he can claim credit for the strongest and most successful assertion of Russian power since the end of the Cold War. At the same time, the country is more isolated internationally than it has been in decades. Putin faces a similar problem on the economic front. A leader who, many Russians say, made rising living standards the basis of his legitimacy now cannot promise that the good times will return.

[Putin] can claim credit for the most successful assertion of Russian power since the end of the Cold War. At the same time, [Russia] is more isolated than it has been in decades.

These contradictory realities have produced wildly disparate assessments, both by Russian observers and others, of Putin’s political prospects and policy intentions. Some view his position as unchallengeable. For them, Putin’s re-election in 2018 is a foregone conclusion; they see him as a virtual “president-for-life,” secure enough to ignore pressures that might force another leader to change course. Others, however, argue that a crisis for the entire Putin system is inevitable—and perhaps not far off. One respected Russian analyst, Nikolai Petrov, wrote recently that the regime may fall within a year. Political strategist Gleb Pavlovsky, a one-time Kremlin insider, believes the president will be reelected in 2018 but sees instability as a growing risk after that.

So which is it: Putin on a roll or Putin on the ropes? As it happens, there is plenty of evidence for each interpretation. Through the coming elections and beyond, the big question will be the shifting balance between the system’s obvious assets and its undoubted liabilities.

On the plus side for the Russian president there is, first of all, his continued high approval rating, currently 80 percent, according to Russia’s independent Levada Center. This number had been steadily declining through 2013, but the annexation of Crimea in 2014 pushed it back solidly into the eighties. Nationalist sentiment, some believe, has given Putin a cushion of support that can sustain him against setbacks far into the future.

A second measure of Putin’s political strength—and a big problem for any forecast that his regime will crumble—is the feeble state of the reformist opposition. Tough election laws kept reformist candidates off the ballot in all but one of last fall’s regional races, and even there they performed poorly.

Opposition groups united to form what they called a “democratic coalition” early this year, but their effort fragmented almost immediately.  Supporters of Aleksei Navalny, the anticorruption activist whom the Kremlin has kept under house arrest, soon left the new organization; and only a tiny number of voters took part in the coalition’s online primary, which had to be canceled after an apparent hacking. The authorities have been able to restrict the work of election monitors and limit media access for opposition figures; they even televised a sex tape of former Prime Minister Mikhail Kasyanov, head of the liberal PARNAS party, making him the object of public ridicule. It is quite possible that the new Duma will include only the same four Kremlin-friendly parties as the old Duma: United Russia, Just Russia (a United Russia-spinoff), the Communists, and ultranationalist Vladimir Zhirinovsky’s “Liberal Democrats.” If liberal candidates have any chance at all, it will be by focusing on a handful of single-mandate districts. (In this election, half of the deputies will be chosen by proportional representation; the other half, in individual races.)

If liberal candidates have any chance at all, it will be by focusing on a handful of single-mandate districts.

Recent energy-market trends represent a third positive for Putin. Between 2013 and 2015 falling prices had cut Russia’s annual oil and gas export earnings by a brutal 60 percent. Now, with oil stabilizing (for the moment) around $50 per barrel, it has become easier to imagine a balanced budget (and stimulative counter-cyclical government spending) in the run-up to the presidential election of 2018.

Finally, a series of Russian diplomatic initiatives may also help Putin at home. He has been able to win wider international acceptance for his claim that the Ukrainian government bears major responsibility for continuing violence in that country’s east and for the stalemated implementation of the Minsk II agreement. Putin’s surprise military intervention in Syria last year has given Russia a further geopolitical success. The frequency and volume of Western criticism of Russian policy have gradually subsided, and regular foreign minister-level dialogue, as well as some working-level military contacts between Moscow and Washington, have been restored.

Despite these positive factors, there are just as many on the negative side of the ledger. Putin’s liabilities do not yet signal existential danger for the current political order, but they point to problems that are more serious than those he has faced to date.

The most obvious negative is the sluggish performance of the economy. After a 3.7 percent decline in GDP in 2015, Russian policymakers—including Putin himself—expressed confidence in a 2016 turn-around. This has not materialized. The OECD’s most recent forecast is for another full-year contraction, this time of 1.7 percent, with flat-line growth to follow in 2017. (The IMF’s projections are slightly more upbeat, but broadly similar.) With the European Union reportedly ready to renew sanctions at least through the end of 2016, early improvement in these numbers is unlikely.

When Russians vote in September, then, Russia may be about to enter the third year of recession. Not surprisingly, political figures across the spectrum are distancing themselves from this record. Putin himself has warned that without new initiatives growth will “hover around zero,” and he has tried to associate himself personally with the cause of anti-corruption. Although Putin has been able to recruit Aleksei Kudrin, his highly regarded former finance minister, back into service as a presidential advisor, the move has done little to quiet criticism of Kremlin policy. To restart economic growth, Kudrin himself has become more insistent on rebuilding the rule of law and other political reforms. With the election campaign heating up, the opposition’s critique of Putin’s economic management is hardly different from the critique made by his own best-known advisor. (Kudrin has even extended his critique to foreign policy, calling on Putin to reduce “geopolitical tensions” that harm the economy.)

Economic stagnation is not treated by the president and his circle as a mere pocketbook issue for voters. In his annual nationwide call-in program, “Direct Line,” in April, Putin heard a long string of complaints from angry citizens that went far beyond material grievances. Their deeper charge was abuse of power throughout the system. The near-enslavement of workers by a fish-processing plant in Russia’s Far East and the defrauding of middle-class investors in a Moscow real estate scheme were just two of many outrages cited during the program, all of them made possible by the indifference or collusion of state officials.

To address these horror stories, Putin had prepared himself with a new electoral theme: the primacy of domestic concerns over foreign policy. In more than three-and-a-half hours of televised Q&A on Russia’s problems both at home and abroad, it was Putin who consistently deflated nationalist rhetoric, insisting that addressing the everyday hardship and injustice endured by ordinary citizens must be a priority.

The shaky popularity of United Russia—down to 35% in a recent Levada poll—represents a further negative for Putin.  The Kremlin has introduced a number of innovations designed to bolster public enthusiasm for the ruling party and to legitimize the election results. U.S.-style “primaries” have been held to select United Russia’s Duma candidates, and in March the president appointed Ella Pamfilova, the human rights ombudsman and former activist, to head the CEC. Yet these measures have had uncertain results at best. Turnout in the primaries has been less than half the stated goal, and Pamfilova, aware of suspicion that she will not defy the Kremlin, voided elections in a Moscow suburb, citing multiple violations of the law by local officials. (“Let them fear Pamfilova,” she has warned.) Members of the ruling-party leadership have begun to acknowledge that United Russia may fall further short of a majority of the party-list vote this September than it did in 2011.

A final innovation in Kremlin strategy is perhaps the most revealing measure of continuing anxiety about the coming round of elections: the recent creation of the new National Guard. This law enforcement unit, directly controlled by the president, has an ominous and much-publicized legal mandate to shoot demonstrators.

As the September vote approaches, Putin’s chief strength is his personal popularity. His greatest vulnerability is that in this election he is not on the ballot. Asked to choose between him and his opponents, Russian voters have long been ready to support him. But given a chance to say how they really feel about their circumstances—and his absence from the ballot gives them that chance—they may choose unpredictably.

Putin’s chief strength is his personal popularity. His greatest vulnerability is that in this election he is not on the ballot.

The Kremlin clearly hopes to legitimize the campaign now underway—and its results—by emphasizing themes like participation and inclusion, and by reminding voters that the president understands their grievances. But it has not been ready to let the outcome rest on positive appeals alone. To get the outcome they want, Putin and his circle appear willing to sacrifice legitimacy for stability. What they cannot know—anymore than outside observers do—is how and when cheating on legitimacy might produce instability.

Given the many obstacles under which his opponents labor, Putin need not worry that candidates supporting him will fail to come out on top. But he cannot be completely sure that a victorious result will be accepted as a true measure of the people’s will. For this reason—and bearing in mind the turmoil of 2011 and 2012—he and his advisers keep worrying. As Valery Fedorov, the head of VTsIOM (the state-funded All-Russia Center for Public Opinion Research) put it recently, “No Russian election is complete without a surprise.”