Skip to main content
Smarter Measures in Fight against Piracy

The recent conviction in Norfolk, VA, of five Somalis on charges of piracy for their attempt to attack the frigate USS Nicholas last spring is a welcome sign that the outlook for ending piracy may be improving. Pirates are currently holding more than five hundred people hostage, and robust international maritime patrols have not eradicated the threat by themselves. Pirate ringleaders (often based outside of Somalia) continue to enrich themselves and advance their operations, presently operating five mother ships and launching successful attacks more than one thousand miles from Somalia. Convictions in court have proven difficult, with so many pirates walking away free that the threat of going to prison has not been a credible deterrent. Add to these realities the pressure on governments to rein in national budgets, and it’s only a matter of time before lawmakers seriously question the wisdom of spending, collectively, $1 billion per year on maritime patrols to counter this threat. Still, recent developments such as the Norfolk ruling offer hope that perhaps the necessary measures are starting to be taken to defeat piracy.

The United States plays an active role in countering Somali piracy to help maintain international law and order as well as the primacy of the state. The influx of large sums of money into East Africa via the piracy racket threatens to cause or increase corruption, further weakening already fragile states. The increased costs now associated with shipping in this region directly affect the price of goods in East Africa and damage valuable industries such as tourism, causing disquietude among African leaders. European leaders are deeply concerned by the persistent threat posed by Somali piracy since so much of Europe’s trade passes by the Horn of Africa. A recent meeting of the German Marshall Fund’s Mediterranean Strategic Dialogue included a great deal of discussion on Somali pirates precisely for this reason. And while the commercial risks are less a concern for America, the threat still menaces American crews delivering aid to East Africa. All of this is not to say that Somali pirates pose an existential threat to the global market, but the risks are real and need to be addressed appropriately.

Most field practitioners and academicians struggling with Somali piracy agree that defeating this threat requires disincentivizing the crime. While it is easy to conceive that one needs simply to increase risks and decrease rewards at sea, the reality is not so simple. Life expectancy for a Somali male is only forty-eight years, unemployment is chronically high, and gross domestic product per capita is $600 per year. To make a dent in the risk-reward analysis that a young Somali man conducts when contemplating a piracy mission, the international community (to include Somalis) has to increase the rewards and decrease the risks ashore while simultaneously increasing the risks and decreasing the rewards at sea. To do this effectively means not only focusing on the pirates operating at sea but also changing the risk-reward equation for the ringleaders sitting in plush villas in Nairobi, clans providing support to pirates in the semi-autonomous Somali state of Puntland, and agents providing intelligence from African ports. It also means reducing the freedom of movement pirates currently enjoy in Puntland. Such an effort will take years, but we can realize incremental progress that builds toward a realistic end-state by combining important new developments.

International patrols--led by the United States, the European Union, and NATO, but also including countries like India, Russia, China, Singapore, and Malaysia--have been able to nearly eliminate piracy in the Gulf of Aden. This has improved security in that narrow body of water and pushed pirate activity into the broader Indian Ocean, making attacks more costly and risky for pirates, but also making it more difficult to counter attacks across such a vast area. Still, the patrols have disrupted a number of actions this year, captured dozens of pirates, and destroyed at least one mother ship. These small successes elevate the costs for pirate ringleaders and increase the risks for front-line pirates--especially when reinforced by successful trials.

The recent ruling in Virginia is one of these successes. The conviction was important for American credibility abroad, especially with Kenya and the Seychelles--the sole African countries willing to put Somali pirates on trial. It may also contribute to a basket of deterrents, since piracy carries a mandatory sentence of life in prison in the United States. Furthermore, the conviction reinforces a belief in the value and efficacy of conducting maritime patrols, without which military morale could suffer and political resolve could easily wane. But we should not expect maritime patrols and court convictions to be a panacea. Concentrating on these actions alone only raises the risks for front-line pirates, while allowing the ringleaders to operate rather freely in neighboring states such as Kenya. 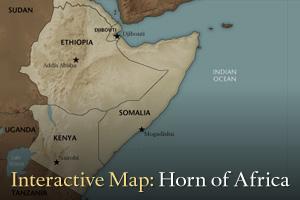 The Department of State’s Political Military Bureau has recently articulated a five-pronged approach to countering piracy that addresses the following areas: financial flows, judicial convictions, regional capacity (for maritime patrols, justice, and prisons), best practices for maritime transport, and discouraging ransoms. Importantly, the bureau has placed the tracking and disruption of financial flows to pirate ringleaders as its top priority. While it is difficult to track illicit funds received through piracy, this new focus suggests more pressure will be applied to African states to crack down on pirate ringleaders living outside of Somalia. We should demand more thorough investigations into unexplained wealth and better information-sharing on suspected ringleaders. Additionally, the bureau’s emphasis on obtaining convictions appears to have paid off in Virginia, so it should use that conviction to demand more robust justice measures in East Africa, especially Somalia, and it should make good on its stated commitment to improving justice capacity in the region.

While the bureau’s new approach is necessary for long-term success and can produce some short-term victories, it cannot end piracy on its own because it does not address core issues of economics and governance in Puntland. But there is positive news on this front as well. Perhaps the most important development for the fight against piracy is the recent announcement of a new, two-tier approach to Somalia by Assistant Secretary of State for African Affairs Jonnie Carson. The United States’ sole interlocutor in Somalia has been the Transitional Federal Government (TFG)--a central government that holds little sway in semi-autonomous Puntland and Somaliland. Carson’s policy enables the United States to continue to support the TFG but also allows agencies to work directly with Puntland and Somaliland.

Simultaneously, the EU has increased its cooperation with East African states, collaborating with the Common Market for East and Southern Africa, the East African Community, and the Southern African Development Community to craft a regional maritime strategy with heavy emphasis on piracy, to include building African maritime security capacity and collaborating on governance and development actions ashore. State’s Africa Bureau, the EU, and the African Union can now begin to work with Puntland and neighboring states to address corruption and complicity ashore vis-à-vis piracy. But they will have to be able to show "what’s in it for Puntland." It will be important to offer meaningful development assistance to reduce unemployment and increase GDP in the region. Luckily, neighboring Somaliland offers a number of positive examples in this area.

We cannot defeat piracy in the Horn of Africa without the active cooperation of Puntland and Somalia’s neighbors, and we cannot defeat it by ignoring the ringleaders or letting captured pirates walk free. The pieces to achieve success are now in place. We need only to actively and coherently combine the new developments emanating from the Department of State’s Political-Military Bureau and Africa Bureau, the EU, and Africa itself with the already robust maritime patrols to finally take a holistic approach capable of mitigating the ill effects of piracy in the near term and defeating it in the long term.

Is China’s Huawei a Threat to U.S. National Security?

The Chinese telecommunications company faces accusations that Beijing could use its 5G infrastructure for espionage. The outcome of the struggle could shape the world’s tech landscape for years to come.