South African President Jacob Zuma has split the governing African National Congress (ANC) and risks a parliamentary no-confidence motion that could bring down his administration. This intraparty division followed his late-night cabinet reshuffle on March 30, in which he removed nine cabinet ministers, including the well-regarded finance minister, Pravin Gordhan. While South African presidents have the authority to remove anyone in the cabinet, by tradition they first consult their party’s leadership. Zuma, however, made these cabinet decisions unilaterally. The reshuffle came as Zuma has grown weaker within the ANC, which has resulted, in part, from recent judicial rulings against his policies and corruption charges that have been leveled against him and his close associates. Zuma presented the reshuffle as a shift toward a “pro-poor” policy, but it appears it was driven by his effort to regain control of the party and ensure he can handpick his successor.

In the aftermath of the cabinet reshuffle, the Democratic Alliance (DA) and the Economic Freedom Fighters (EFF), the two largest opposition parties, called for the vote of no confidence. It would require a simple majority among the four hundred members of the National Assembly, the country’s parliament. Of them, 249 belong to the ANC. 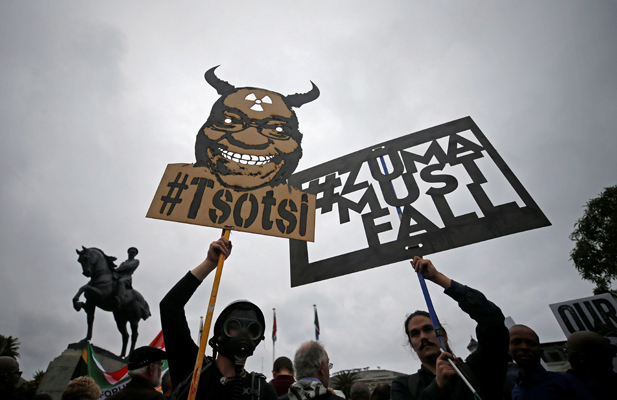 Domestic and international investors are not happy. Following the reshuffle, the rand dropped by over 7 percent by the weekend of April 1. On April 3, the credit rating agency S&P Global downgraded South Africa’s sovereign credit rating to junk status and the rand dropped an additional 2 percent. (Moody’s announced that it too would review the country’s credit status.) South African opinion leaders and international financiers saw Gordhan not only as a steady hand at the treasury who maintained significant support within the ANC, but also as a brake on the corruption of Zuma and the Gupta brothers, his close associates. (Widely accused of capturing economic and tendering policy, Ajay, Atul, and Rajesh Gupta are closely associated with Zuma’s son Duduzane.) Many investors see Gordhan’s firing as a sign that the ANC can no longer rein in Zuma’s corruption and the Guptas’ influence peddling.

As Zuma’s position within the ANC has eroded, he has turned to populism. Zuma and his allies within the party claim that Gordhan was a creature of big business, which continues to be dominated by whites, and was blocking Zuma from radically transforming the South African economy to benefit the poor. (Some of Zuma’s allies claim that Gordhan held secret meetings in London to discourage investment in South Africa until Zuma leaves office.) The treasury has opposed Zuma’s proposed large-scale land reform and ambitious nuclear power program on the basis that the country cannot afford it. Zuma’s populism has resonated somewhat with blacks, who make up about 80 percent of the population. More than twenty years after the end of apartheid, racial segregation and racial legal distinctions are gone, but whites, who make up about 8 percent of the population, continue to dominate the economy.

As Zuma’s position within the ANC has eroded, he has turned to populism.

The popularity of the ANC, the party of South Africa’s liberation from apartheid and of Nelson Mandela, has significantly eroded under Zuma. It is increasingly out of touch with its constituents and is associated with poor local administration. Since the 2016 municipal elections, the ANC controls only one major city, Durban. Opposition parties now govern Cape Town, Johannesburg, Pretoria, and Port Elizabeth. The tactical cooperation between the DA, a center-right party associated with whites and other minorities, and the EFF, a primarily black party known for rhetoric far more radical than Zuma’s, is testimony that their mutual dislike of Zuma trumps ideological differences.

The ANC’s leadership is acutely aware that it must turn around its electoral fortunes or risk losing the dominance it has enjoyed since the end of apartheid. The party will choose a new leader in December; Zuma has said that he will not run. But, his critics argue, Zuma hopes to choose his successor so that he can forestall possible prosecution or jail time for corruption and preserve his accumulated wealth after he no longer enjoys immunity. Though Zuma’s presidential term will run until 2019, the ANC can recall him at any time, as it did Thabo Mbeki in 2008. Once out of office, Zuma will face some seven hundred charges, mostly related to alleged corruption.

The “top six,” as the ANC’s most senior leaders are known, appear to be evenly split. One faction consists of Zuma, ANC Deputy Secretary-General Jessie Duarte, and Baleka Mbete, who is both the National Assembly speaker and party chairwoman. In opposition to the Zuma faction are the “reformers”: Deputy President Cyril Ramaphosa, ANC Secretary-General Gwede Mantashe, and ANC Treasurer-General Zweli Mkhize. Mbete and Ramaphosa are widely seen as rivals for the party’s leadership, and Mkhize is a possible compromise candidate. Previously, Zuma appeared to favor Mbete; more recently he has supported the candidacy of his ex-wife Nkosazana Dlamini-Zuma, though not publicly. Others within the party machinery are likely to support Zuma; most are his appointees.

Reflecting its long period of clandestine operations during the antiapartheid struggle, the ANC’s tradition is to carry out internal debates in secret while displaying solidarity in public. Hence, the party’s leaders resent Zuma’s failure to take into account opposition to the cabinet reshuffle but are also hostile to public criticism of the president. They ultimately posed no opposition to the new cabinet ministers, who were sworn in on April 3.

The party’s leaders resent Zuma’s failure to take into account opposition to the cabinet reshuffle.

The South African Communist Party (SACP) and the Congress of South African Trade Unions (COSATU), together with the ANC, form the “triple alliance.” (SACP and COSATU members of parliament are on the ANC electoral list; they do not compete for seats on lists of their own, and sometimes serve in ANC cabinets.) The ANC is a big tent, with a broad range of views on economic policy. Since the end of apartheid, in 1994, the ANC government has operated a liberal, capitalist economy that broadly follows the Washington consensus principles promulgated by international financial institutions. However, there has always been a faction within the “triple alliance,” often associated with the SACP and COSATU, that has advocated more left-wing policies. Zuma’s rhetoric about the cabinet reshuffle appears designed to appeal to this wing, but the current crisis is not about policy; it is about Zuma, corruption allegations, and the influence of the Gupta brothers. Both the SACP and COSATU are calling for Zuma to either resign or be removed from office.

Zuma has faced seven motions of no confidence since 2010, and the eighth could come as early as this week. For it to take place, Mbete would have to recall the National Assembly from its Easter recess, which is now underway. Some fifty to sixty ANC members of parliament would have to support the motion for it to succeed. That would likely require clear leadership from the anti-Zuma faction, which thus far has been absent. The party’s National Working Committee sided with Zuma on April 4, making defections less likely. However, if a significant part of the ANC determines that Zuma is toxic to the party’s future, Zuma’s opposition may find sufficient votes.

There are signs of growing public outrage at Zuma and his self-serving behavior. At the funeral of the ANC liberation icon Ahmed Kathrada in late March, organizers publicly praised Gordhan and requested, per Kathrada’s will, that Zuma not attend. (Kathrada had openly criticized Zuma as having betrayed the ANC’s democratic, “nonracial” ideals.) The SACP’s and COSATU’s opposition to Zuma is a wild card in a no confidence vote. Their parliamentary members could go either way or even split, though that would be contrary to their emphasis on party solidarity. If the rand continues to fall and the country’s credit rating deteriorates further, oligarchs within the ANC or with close associations to the party may be inclined to dump Zuma sooner rather than later. On the other hand, it appears that the ANC’s leadership is likely to stick with Zuma until the party leadership race in December.