Hundreds of thousands of Koreans gathered in central Seoul last weekend in the largest demonstrations South Korea has seen since its pro-democracy movement toppled authoritarian rule in the late 1980s. South Korean opposition leaders provided signs and encouraged public chants demanding the resignation of President Park Geun-hye. These demonstrations are the culmination of a ballooning national crisis that has ensnared the president and her top associates with allegations of hidden influence on government decision-making, extortion, and influence-peddling. 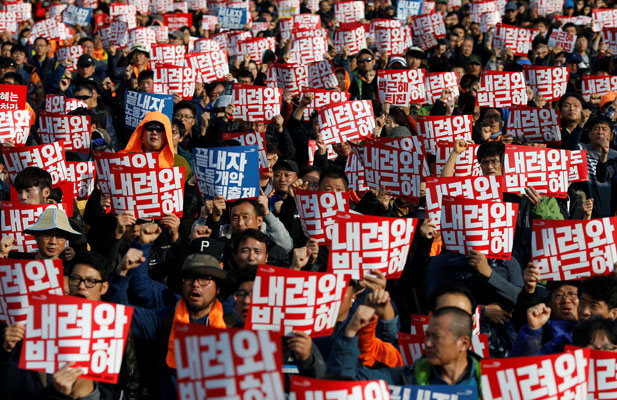 Park’s public approval has dropped to an unprecedented low of 5 percent following media reports that she had enabled her family friend, Choi Sun-sil, to extort funds from large Korean conglomerates and to wield extensive behind-the-scenes influence on government decision-making. Park’s efforts to manage the crisis, including two public apologies within two weeks, have failed to tamp down widespread public anger; instead, they have seemingly fueled it.

Allegations of Choi’s excessive influence surfaced in summer 2016 with media reports that the Blue House had used its influence and that Choi made payments made in connection with the admission of Choi’s daughter into the elite Ewha Woman’s University, eventually forcing its president to resign. On October 24, the cable broadcast station JTBC electrified the Korean public with reports that Choi had edited several speeches delivered by Park based on evidence found on Choi’s discarded personal computer. The resulting investigations have led to the arrests of Choi and top officials on Park’s staff, as well as allegations that Korean-registered foundations Choi controls extorted tens of millions of dollars from conglomerates. The expanded investigations and media leaks have raised questions about Choi’s influence on several ministries and have led Korean prosecutors to request interviews with Park herself.

Park’s misuse of presidential power has enraged and embarrassed the Korean public as never before.

Regardless of whether Park immediately resigns, the crisis threatens to paralyze the South Korean government for months. It comes amid heightened anxieties in South Korea caused by the United States’ transition to a Donald J. Trump presidency and North Korea’s push to develop a long-range nuclear strike capability. Because the opposition-controlled National Assembly is intent on paralyzing government functions as a message to Park that her decisions no longer carry legitimacy, South Korea’s finalization of an information-sharing agreement with Japan may be postponed, and the deployment of the Terminal High Altitude Air Defense (THAAD) system, announced by the United States and South Korea in July, will now encounter heightened opposition.

Park will no longer join this month’s Asia-Pacific Economic Cooperation (APEC) summit in Peru and is unlikely to join a summit with China and Japan scheduled for December. Park’s impeachment or resignation would generate intense debate in the National Assembly. South Korea’s constitution stipulates that resignation triggers an election within sixty days, but none of South Korea’s political parties are prepared to field candidates in such a short time.

South Korea has had a long line of corruption cases that involve obligations of friendship crossing the bounds of legality, but Park’s misuse of presidential power has enraged and embarrassed the Korean public as never before. The public’s emotional response stems from a combination of Park’s secrecy, her lack of accountability for Choi’s actions, her seeming admission of connection to the scandals, and national embarrassment that the president would take secret advice on appointments and policies from a friend who exploited her privilege for personal gains.

The Choi family’s friendship with Park dates to the days following Park’s mother’s assassination in 1974. The grieving Park was befriended by Choi Sun-sil’s father, Choi Tae-min, a religious cult leader who allegedly claimed he could channel the spirit of Park’s mother. As many of the family’s loyalists cut their ties, Park became ever more dependent on the Chois.

The scandal has exhausted Park’s capacity to rule, yet it is unclear how long it will take to replace her.

Park made her political comeback in the 2000s more as an icon than a political networker or mobilizer. As a symbol of Korean leadership, she could inspire political loyalty among Korean conservatives by conjuring feelings of nostalgia and determination rooted in Korea’s ability to overcome hardship and modernize. Curiously, however, Park never expanded her personal networks beyond her closest family associates, as other Korean politicians do. As president she rarely holds one-on-one policy discussions with subordinates in her own government and has relied primarily on those in the military and bureaucracy who are institutionally obligated to support the head of government. Park’s aloofness from her own advisors and avoidance of public scrutiny (she conducts only one press conference a year, a scripted affair) have exacerbated public outrage.

Where Does Korea Go From Here?

The scandal has exhausted Park’s capacity to rule, yet it is unclear how long it will take to replace her. The scandal contains three interrelated aspects that must be addressed to restore political stability in the event of a leadership change:

1)      The legal timetable. The immediate problem for South Korea’s leadership is the pace of the unfolding crisis. Public outrage has outpaced the prosecution’s investigation. The scandal has unfolded so quickly and with such a large public impact that legal processes have yet to play themselves out, making the public verdict demanding Park’s resignation premature.

One result of the mismatch between public sentiment and the investigation is that Park has a strong incentive to hold on to power for now despite public demands for her resignation. Moreover, no single individual or institutional representative is authorized to negotiate the terms of Park’s resignation or offer her a quid pro quo. A formal impeachment proceeding in the National Assembly would take time and could engender sympathy for Park, a risk faced by opposition parties.

Yet if Korean prosecutors find that there are grounds for impeachment, Park would be immediately sidelined. The prime minister would handle government affairs and serve as the acting head of government. Impeachment would require support from two-thirds of the National Assembly and would have to be upheld within 180 days of passage by a majority of the Constitutional Court’s nine justices.

2)      Political power vacuum. A second dimension of the crisis involves the balance of power within the National Assembly and differences among and within the leadership of each party over how much time would be necessary to prepare for a presidential election for a new five-year term, despite public demands for early action. There is also the question of how Park’s resignation or impeachment might affect the prospects of presidential candidates put forward by each party. The opposition is demanding that Park transfer some or all of her responsibilities to a caretaker prime minister nominated by consensus of the National Assembly to exercise interim responsibility over affairs of state. But the National Assembly’s debate over an interim government may shift toward impeachment proceedings if the prosecutor reports that Park is culpable. (She would still remain immune from prosecution for the duration of her term in office.)

While the crisis has illuminated the need for constitutional revision, political parties tend to use such efforts to achieve short-term political gains.

Each of South Korea’s three main parties has a slightly different strategy. The largest opposition party, the Democratic Party, controls the National Assembly, so it would likely have the greatest influence on the selection of a caretaker prime minister. Still, such a decision would require support from the smaller opposition People’s Party as well as some members from the ruling Saenuri Party. The difficulty of forging a political consensus on these questions and securing Park’s acquiescence is another barrier to establishing a viable interim government.

3)      Constitutional revision. Having banned discussion of constitutional revision earlier in her term, Park herself reintroduced the question once the Choi scandal broke, presumably to distract political elites. There has been long-standing recognition that South Korea’s constitution, promulgated in 1988, at the end of the country’s authoritarian era, contains procedural flaws, including a one-term limit on the presidency, that should be revised to support a more effective democratic governing system. The scandal has also highlighted flaws surrounding presidential succession in the event of a political crisis and has encouraged more serious thinking on what elements of the national political system should be revised under an amended constitution.

First, the provision for requiring an election within sixty days of a president’s resignation has proven rigid and impractical given each party’s need to vet presidential candidates. Second, as South Koreans have debated the possibility of shifting power over domestic affairs from the president to a more powerful interim prime minister, doubts have arisen over whether a two-headed system, similar to the French model, would work well in South Korea, where it is more likely that two leaders would compete with one another rather than share power. Instead, an elected vice president, rather than an appointed prime minister, would be perceived as carrying greater legitimacy in crisis management. Third, the limitation on presidents serving a single five-year term has been perceived as constraining their productivity and effectiveness, leading some scholars to advocate a two-term limit.