Cecil the Lion was a summer media phenomenon. The story of an American dentist killing a Zimbabwe lion illegally after luring him out of a protected reserve generated millions of Google News hits in August and was shared millions of times on sites like Facebook.

Yet while social media has generated popular revulsion at big-game hunting, little attention has been given to Africa’s more serious problem of poaching and the illicit wildlife trade. While big-game hunting and poaching both involve the killing of magnificent creatures, the two activities are different. Big-game hunting is usually legal. It arguably promotes conservation of wild animals because the tourism and hunting fees it generates makes them of greater value to local people than just for their meat. The activity is also often an important source of revenue for African governments that may be devoted to conservation projects. 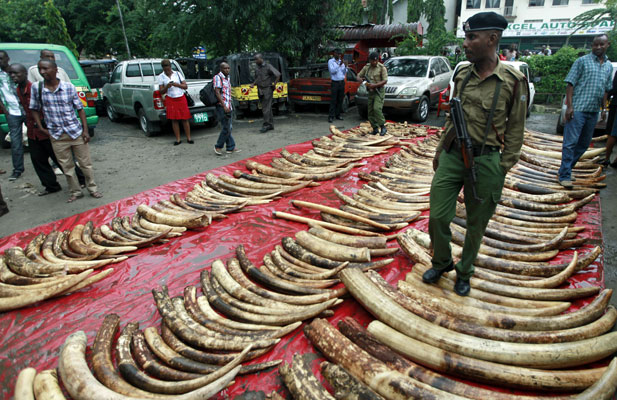 Nevertheless, the uproar over Cecil provides an opportunity to focus broader public attention on the illicit wildlife trade. The illicit trade threatens the survival in the wild of species ranging from lions and elephants to pangolins and gorillas. Every year criminal networks stretching around the world traffic millions of animals and animal parts. Driven by the widespread desire for decorative objects, traditional medicinal recipes, and exotic foods, this industry has become the fourth-largest illegal trade in the world, behind narcotics, counterfeiting, and human trafficking.

If the current rate of elephant and rhino poaching continues, many scientists believe these species and many others could be extinct in the wild within decades.

Africa, with its vast diversity of wild animals and the world’s largest populations of “valuable” species, such as rhinoceros, pangolin, and elephant, has been especially hard hit. On the black market elephant rhino horn is worth more than $65,000 per kg, pangolin scales fetch approximately $3,000 per kg, and elephant ivory is worth more than $2,100 per kg. (A pair of ivory chopsticks in China costs more than $1,000.)

Some thirty thousand African elephants are killed illegally every year, with more than one hundred thousand killed between 2009 and 2012, reported National Geographic in August 2015. Africa’s rhinos now total fewer than twenty-five thousand in the wild. If the current rate of elephant and rhino poaching continues, many scientists believe these species and many others could be extinct in the wild within decades. 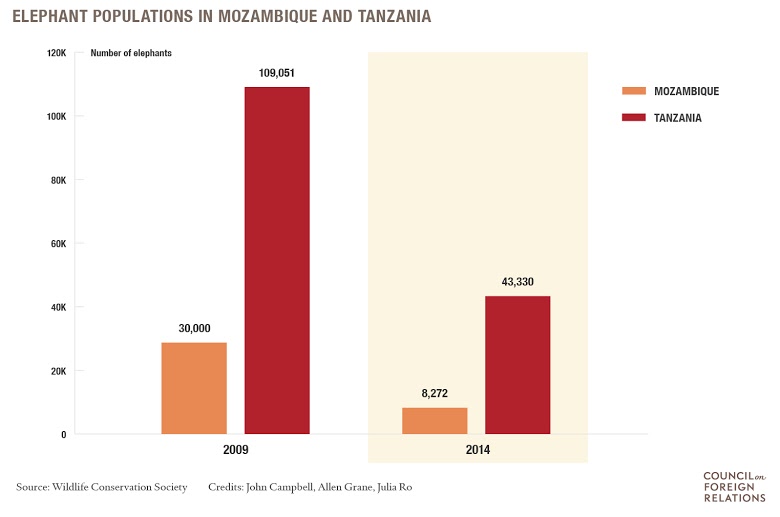 The trade thrives on poverty and ignorance. Within many African communities poaching is not viewed as a crime but rather as one of the few ways for local people to make money. Villagers are often unaware of how profitable a resource live animals can be. On the other hand, many consumers of ivory in China are also unaware that obtaining ivory involves killing an elephant. In Vietnam, where rhino horn is often used for medicinal purposes, many do not know that it is made out of keratin, the same material as human fingernails, and has no real medicinal value.

Targeted education programs can have success. Following one campaign against the use of rhino horn in Vietnam, polls showed that the number of people who said they would use rhino horn again fell markedly. In Africa, there are examples of poachers becoming conservationists where they can participate in the economic benefits provided by keeping the animals alive. One example is the Iby’Iwacu Cultural Village in Rwanda, where former gorilla poachers are now working to conserve the species.

Illegal animal trafficking is more than an attack on biodiversity. It is also a security and governance threat. Insurgencies, terrorist organizations, and sometimes state security services target wildlife to fund their operations, though it is difficult to get clear figures on how much money they gain from trafficking. Examples include the army of the Democratic Republic of the Congo (DRC), the Sudanese Janjaweed irregulars, and Joseph Kony’s Lord’s Resistance Army (LRA), which originated in Uganda and is now active in the Central African Republic. Some accounts suggest that groups such as Somalia’s al-Shabaab capitalized on the ivory trade by serving as middlemen. National Geographic tracked the movement of a pair of faked elephant tusks from central Africa through a poaching network as far away as Sudan. That particular ivory trade, in which Sudan’s rogue al-Bashir government may be complicit, helps finance a number of armed groups, notably the LRA. 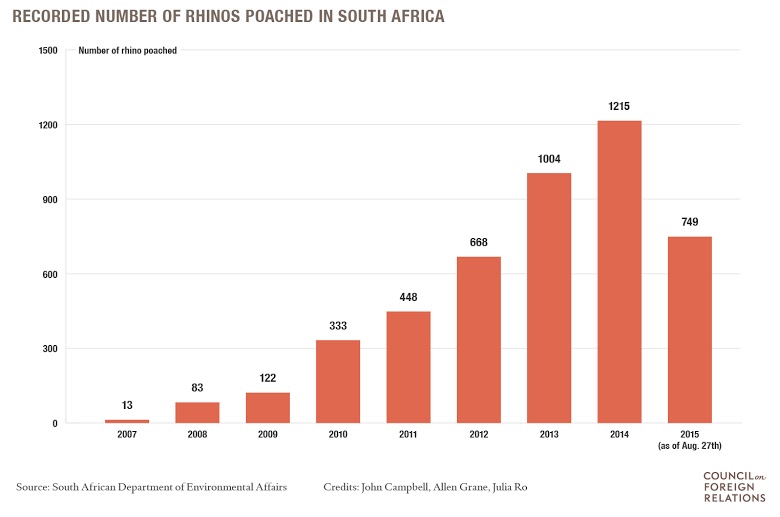 The illicit wildlife trade imposes a high financial cost on Africa’s developing economies. For many of these countries, animals serve as a major driver of travel and tourism, bringing needed money into national and local economies. One such example is Rwanda, where last year tourism from gorilla viewing contributed $300 million to the economy, 5 percent ($15 million) of which is directly invested into local communities. Tanzania’s travel and tourism industry, which relies heavily on wildlife viewing, provides 14 percent of its GDP. Tourism plays a similar role in the GDPs of Botswana, Kenya, Rwanda, South Africa, and Uganda (ranging from 9.1 to 12.1 percent). Tourism directly and indirectly employs 12.2 percent of the Tanzanian work force. One estimate is that throughout the course of its natural lifespan each elephant contributes over $1.6 million to African economies. The negative economic impact of the illicit wildlife trade on countries like Tanzania, where the elephant population has declined by more than 60 percent (from over 109,000 to just over 43,300) over the last five years, is significant, though exact figures are hard to come by.

China and the United States are the two largest markets for the illicit wildlife trade, and reduction of demand in both is essential. In May 2015, the Chinese government announced its intention to phase out the legal trade in ivory, which has served as a cover for a much larger illegal trade. However, since the Chinese government’s announcement, it has released no concrete plan for doing so.

One step is strengthening law enforcement. In 1989 Congress passed the African Elephant Conservation Act, which banned a commercial market for new ivory. Over time, this legislation grew to include other species and wildlife products. However, these laws have had loopholes now targeted by newer legislation. Most recently, President Obama has called for a ban on interstate ivory trade, excluding specific items such as antique piano keys and antique guns that contain ivory. In addition to federal initiatives, several states are considering legislation restricting the intrastate trade. California, New Jersey, and New York have already passed such legislation.

Beijing and Washington must also work with other nations to combat the trade. The United States should support diplomatically and financially the efforts by the UN Convention on International Trade in Endangered Species (CITES) to combat the illegal trade. There are 181 parties to the convention. The U.S. government should continue to work with CITES to help develop better monitoring systems of known trafficking routes and to make intelligence, training, equipment, and funding available to resource-starved African governments. The United States should also work with CITES to encourage the Chinese government to take the necessary next steps. Washington should continue to hold the position that there should be no legal trade for products from endangered species, such as ivory and rhino horn.

In a time of budget austerity, the Obama administration should ensure sufficient funding for the federal agencies responsible for enforcement of the laws and regulations against the illicit wildlife trade. When the administration launched the Presidential Task Force on Combating Wildlife Trafficking, the United States contributed an initial $10 million for training and technical assistance to Kenya, South Africa, and other countries. Over the last year the United States has taken the lead internationally and invested more than $60 million in international programs to address wildlife trafficking. In turn, the Chinese government has also contributed $10 million to support wildlife protection and conservation in Africa. Funding must continue. For their part, conservation activists should press the U.S. states considering legislation against the ivory and rhino horn trade, such as Connecticut and Massachusetts, to pass and enforce these bills. By doing so conservationists can close the loopholes that have allowed the illicit trade to be prosper.

In the longer term, the federal government and conservation bodies should promote stronger partnerships with African governments and with the African tourism industry. By facilitating partnerships among governments, wildlife services, private business, and nongovernmental organizations, the United States could promote practical steps, such as improved training of park rangers and better educational campaigns targeted at villages. Partnerships can also target and expand educational campaigns directed at raising awareness among potential consumers of the illicit trade, as has been done in Vietnam.

More specifically, the executive branch of the U.S. federal government should share relevant intelligence and provide training in intelligence gathering to African governments combating poaching. One ongoing, successful example is the U.S. Customs and Border Protection Service training Tanzanian customs agents to use ivory sniffing dogs. By working with its African, Chinese, and other international partners to protect Africa’s wildlife, Washington has an opportunity to save Africa’s iconic species while also promoting regional security in Africa.