Skip to main content
The Threat to Myanmar’s Awakening

Over the past month, Myanmar’s simmering civil unrest appears to have sharply escalated. A string of unexplained bombings hit across the country in mid-October, including at a prestigious hotel in Yangon, in Mandalay, and in northeastern Myanmar. In November, Myanmar police reports indicated that a group of men—all Buddhist and allegedly from Arakan/Rakhine state—were planning to launch bomb attacks at mosques across the country.

The bombings and the reported plot highlight a growing problem. The political and economic reforms launched three years ago, as the military gave way to a civilian caretaker government, initially created enormous optimism among the population.

Yet the country now faces growing insecurity and rising disappointment among citizens that reform has not brought higher standards of living. Interethnic and interreligious unrest now threaten to halt reforms altogether, depress much-needed investment, and even lead to broader regional tensions. 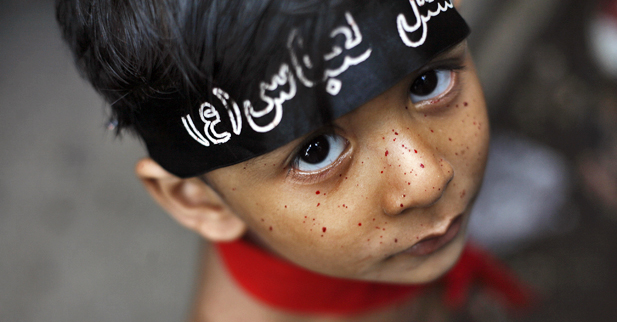 A Shiite Muslim boy with specks of blood on his face and body looks on during the Ashura religious festival in Yangon, November 2013.(Photo: Minzayar/Courtesy Reuters)

A Climate of Insecurity

Myanmar has had a long history of xenophobia and tension. During six decades of harsh military rule, anti-Muslim violence occurred sporadically, sometimes encouraged by segments of the Buddhist clergy and other leaders. The country was also plagued by numerous insurgencies by ethnic militias, and several episodes of mass violence against ethnic Indians and Chinese.

Anti-Muslim violence erupted again two years ago, in Arakan (or Rakhine) State in western Myanmar, where religion has been conflated with nationality. Many ethnic Arakan Burmese launched attacks at ethnic Rohingya Muslims, whom they claimed did not deserve Myanmar citizenship, since (some of) the Rohingya originally migrated from what is now India and Bangladesh. In some instances, Rohingya Muslims were attacked in a quest to grab valuable land. Local security forces did little to stop the violence that has killed hundreds and displaced more than 140,000 Muslims.

The violence is no longer confined to western Myanmar and large cities with major Muslim populations; attacks have occurred throughout the country. "The building blocks of genocide are in place," Tom Andrews of United to End Genocide, a human rights organization, told a U.S. congressional hearing on Myanmar in September. Many members of the police and army belong to growing hard-line Buddhist nationalist groups and neither President Thein Sein nor opposition leader Aung San Suu Kyi has seriously condemned attacks on Muslims.

The growing climate of insecurity for Muslims also has sparked a regional response, threatening several U.S. partners. Indonesian police say radical Muslim groups in Indonesia, angered by the attacks, have tried to bomb a prominent Buddhist temple and the Myanmar embassy in Jakarta. (Indonesia has a small Buddhist minority.) The temple bomb failed to detonate, and the embassy plot was foiled. But anger in Indonesia over the treatment of Myanmar’s Muslims is not abating—there are regular protests outside the Myanmar embassy—and worries are growing that Indonesian militants will recruit Myanmar Muslims to launch attacks back at home.

The India-Myanmar diplomatic relationship has been strained by Myanmar’s failure to address Buddhist-Muslim violence, and in July ten bombs exploded around Mahabodhi Temple in India, a revered Buddhist temple site; several Indian officials and investigators believe the bombings were planted as revenge for the attacks on Muslims in Myanmar.

The tense situation has been exacerbated by popular perceptions that three years of reforms, while immensely positive for freedom of expression, have not fostered broad-based development, instead enriching only a small handful of elites. Since the military handed power to Thein Sein, a former general turned civilian, three years ago, Myanmar has become a darling of foreign donors. In addition, the promise of offshore gas fields, onshore resources like copper and timber, and one of the largest untouched consumer markets in the world initially lured many multinationals, who opened Myanmar offices and joined assessment trips to the country in 2011 and 2012.

Fueled by these initial investments, and a tap of cash from donors and Myanmar exiles returning to the country, gross domestic product grew 6 percent in 2012 and is projected to grow 6.8 percent in 2013. But many of the initial investment promises did not materialize, as foreign investors began to grapple with Myanmar’s horrendous physical infrastructure, complex political climate, and now the rising tide of violence.

In addition, although tourism numbers have risen, they have not grown as much as expected, largely because of political instability. Several large investors pulled out of a signature project called Dawei port, and other planned projects also have been mothballed. A number of executives from prominent U.S. companies told me over the past year that, though they visited Myanmar, they have been cautious about making any major investments because of the lack of infrastructure and the political instability.

In fiscal year 2012–2013, Myanmar attracted only $1.4 billion in approved foreign investment, a drop from $4.6 billion in approved foreign investments the fiscal year before, according to the Ministry of National Planning and Economic Development. Meanwhile, in its most recent rankings of countries based on the ease of doing business there, the World Bank ranked Myanmar 182 out of 189 countries in the world.

Neither the government nor major donors to Myanmar have done much to prepare the population for the possibility that, even if the country democratizes, economic development could come slowly. Indeed, as I write in my book Democracy in Retreat, overly high expectations for democratic change to equal growth is a common problem in developing democracies.

At the same time, the large amounts of foreign aid pouring in without much coordination could add to the population’s anger that development is not benefiting a wider range of people. Although Myanmar’s total foreign aid figures remain murky, Japan alone has promised $18 billion in new aid, investment, and debt forgiveness, up from almost nothing five years ago. The EU, United States, Australia, and other major donors have also announced promised new aid programs in the hundreds of millions.

The failure to push donor money out to the countryside, home to many of Myanmar’s biggest problems, has only added to impressions that the funds will go primarily to middle class and wealthy people in Yangon and other big cities. Many Myanmar economists and officials worry that the huge amounts of donor aid will turn Myanmar into another Cambodia, where decades of aid have fostered economic expansion but also have caused inflation, distorted the economy, and helped create a small elite who primarily benefit from investment and assistance.

To stop the cycle of violence and popular disillusionment, both the Myanmar government and foreign actors should take the following steps: