Viewed one way, Iranian President Hassan Rouhani’s UN address (PDF) appeared to offer the prospect of a new partner in calming the roiling Mideast. Noting diplomacy yielded the nuclear deal, Rouhani dangled the possibility of further cooperation: “Considering the fact that this deal has created an objective basis and set an appropriate model, it can serve as a basis for foundational change in the region,” he said.

Yet taken in full, Rouhani’s speech was a typical exercise in Tehran doublespeak that crystallized the Orwellian cosmology of the Islamic Republic. Rouhani began his list of indictments by castigating the United Nations for “imposition of sanctions against the Iranian nation and government as a result of misunderstandings and sometimes overt hostilities of some countries.” Rouhani neglected to mention that the sanctions resulted from Iran’s systematic violations of its obligations under the Nuclear Non-Proliferation Treaty (NPT) and its obstinate refusal to adjust its course for over a decade. 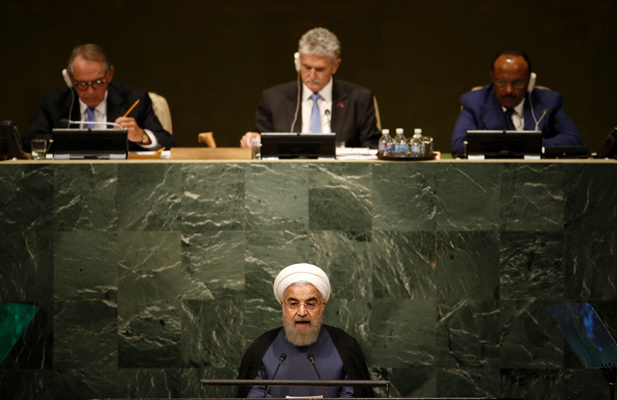 In an even more intriguing passage, the president of a country Washington rates as a leading sponsor of terrorism bemoaned that “the greatest and most important threat to the world today is for terrorist organizations to become terrorist states.” Rouhani proceeded to assure, “We are prepared to assist in the eradication of terrorism and in paving the way for democracy and ensuring that arms do not dictate the course of events in the region.”

As one of the masters of a repressive regime, Rouhani in his UN speech displayed no compunction about proclaiming: “As we aided the establishment of democracy in Iraq and Afghanistan, we are prepared to help bring about democracy in Syria and also Yemen.” All this makes sense if one accepts Rouhani’s claim that the cause of violence and disorder in the Middle East today is the “U.S. military invasion of Afghanistan and Iraq and the U.S.s’ unwarranted support for the inhumane actions of the Zionist regime against the oppressed nation of Palestine.”

The Middle East today is indeed undergoing an unprecedented transition beset by collapse of state power, rise of extremist ideologies, and the probable proliferation of nuclear technologies. Iran is in many ways contributing to all of the region’s maladies. Just because Iran is part of the problem does not mean it can contribute to a solution.

A Landscape of Turmoil

Post-colonial Arab governments may have been considered autocratic, corrupt, and inefficient but were thought to command their territories. The region did suffer from the rise of small-scale secular terrorist organizations and later radical Islamist movements, but the central governments often took control and ruthlessly policed their nations. Today, the governments of many of the region’s once-pivotal states, such as Iraq, Libya, and Syria, no longer have command of large swathes of their lands. As central governments retreat in midst of civil wars, extremist groups such as the self-declared Islamic State fill the vacuum.

There are many factors behind the collapse of the regional order, but one of them is Iran’s deliberate policy of meddling in the region. In Iraq, it is Iran’s policy to keep that nation divided as a means of preventing it from contesting Iran’s hegemonic aspirations. And in Syria, Iran’s enabling of President Bashar al-Assad has only prolonged that civil war and contributed to one of the greatest humanitarian catastrophes in the history of the Middle East.

"Iran is in many ways contributing to all of the region’s maladies. Just because Iran is part of the problem that does not mean it can contribute to a solution."

Hovering over all this is the fact that the region is increasingly polarized along sectarian lines. The two Gulf giants, Iran and Saudi Arabia, are both fanning the flames of sectarianism. The Saudis have been a source of assistance for an entire spectrum of radical Sunni movements for a long time. Iran is also contributing its share to the regional disorder. In Iraq, Iran has misused its influence there to push for Shia hegemony and has aided Shia militias that have done much to exacerbate Sunni anxieties. In the Gulf, Iran continues to meddle in the internal affairs of the sheikdoms and exploit their Shia populations to weaken the Sunni Arab monarchs. Lebanon’s Hezbollah Party is not just an instrument of Iran’s regional surge but also keeps Lebanon divided against itself. And the butchery of Assad, Iran’s client, in Syria remains the greatest instigator of Sunni militancy. As the Sunni populations across the Middle East see the loss of their influence in critical states and the collapse of seats of Sunni power, many are turning to radical forces, such as the Islamic State, that are promising salvation on the cheap. And given the conditions of today’s Middle East, any demise of the Islamic State is likely to be followed by the rise of another vicious militant group. The Islamic State is not the cause of the region’s maladies but one of its most tragic symptoms.

In the midst of this disorder comes the Joint Comprehensive Plan of Action (JCPOA), an arms control agreement that granted Iran the right to enrich and stipulated that after a passage of time that enrichment capability can be industrialized. Given the intensity of competition between Iran and the Sunni monarchies led by Saudi Arabia, it is likely that they will seek to match Iran’s capabilities by procuring their own nuclear technologies.

For much of the past decade, the United States has promoted civilian nuclear programs that do not rely on indigenous enrichment. Indeed, this is precisely the type of nuclear apparatus that the United Arab Emirates agreed to construct. In light of the JCPOA that granted Iran an industrialize-size nuclear program, the UAE is already reconsidering its nuclear compact. It is inconceivable that the Saudis and others will not seek to emulate Iran’s program. To be left off the march for nuclear empowerment means losing an important source of leverage in today’s zero-sum Middle East.

The United States stands at an important turning point, worthy of a reasoned debate. The resurrection of the state system in the Middle East and the stemming of the tide of its many civil wars will require a substantial investment of funds and probable deployment of troops in places such as Iraq and Syria. It may come to pass that sensing diminishing prospects of success in the Middle East and the lure of opportunities elsewhere, the U.S. public will recoil from such a massive intervention. Still, it is a debate that Americans must soon have.