This year’s Nuclear Security Summit offers a fresh opportunity for Chinese President Xi Jinping and U.S. President Barack Obama to discuss the most serious global threat to nuclear security: North Korea’s nuclear defiance. North Korea’s fourth nuclear test in January and long-range missile launch in February have catalyzed Chinese cooperation with the United States to pass a stronger-than-expected UN Security Council resolution condemning North Korea for its nuclear development efforts. A long-standing strategic interest in stability on the Korean peninsula has remained China’s primary consideration in maintaining close ties with Pyongyang and occasionally countering international efforts to punish the regime for its nuclear activities. But this year’s summit occurs at a time of growing Chinese resentment at North Korea’s willingness to take Chinese support for granted and put Chinese strategic interests at risk. 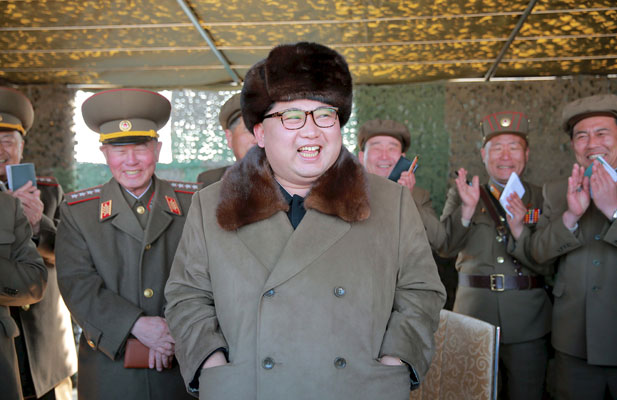 The Nuclear Security Summit, launched in 2010 by President Obama, has focused on the need to secure nuclear materials so that they will not fall into the hands of terrorists or other nonstate actors. These biennial meetings have also provided an opportunity for sideline discussions among leaders on pressing threats to global nuclear security, including U.S.-South Korea consultations during the 2012 Seoul summit and anticipated conversations on North Korea between Obama, China’s Xi, South Korea’s Park Geun-hye, and Japan’s Shinzo Abe alongside this year’s summit.

For more than a decade, China has been viewed simultaneously as a crucial partner to achieve North Korea’s denuclearization, as an enabler (witting or unwitting) of North Korea’s nuclear development, and as the guarantor of the regime’s survival. These multiple roles that Beijing has taken on are driven by its three sometimes conflicting interests with regard to North Korea: no war, no instability, and no nukes. The Beijing-hosted Six Party Talks, a diplomatic forum aimed at North Korea’s denuclearization, served as a bridge enabling China to facilitate U.S.-North Korea talks during the George W. Bush administration. Within this framework, the September 2005 Six Party Joint Statement proved to be the high-water mark for multilateral diplomacy toward North Korea in which the United States, China, Japan, Russia, and the two Koreas agreed to principles that linked denuclearization to diplomatic normalization, economic development, and peace objectives based on an “action-for-action” framework.

In response to North Korea’s second nuclear test in June 2009, China went along with a significantly strengthened UN Security Council resolution, but then decided that embracing North Korea, rather than giving it a cold shoulder, might be a more effective approach that would also restore Chinese influence in Pyongyang. Former Chinese Premier Wen Jiabao’s visit to Pyongyang on the sixtieth anniversary of the establishment of China-North Korea relations in October 2009 marked China’s shift toward a high-level embrace of North Korea. China’s more positive approach included increased financial support, pledges of closer political coordination, and as many as eight meetings between Kim Jong-il and high-level Chinese interlocutors in 2011. As a consequence, however, China also became North Korea’s protector and enabler as Beijing defended Pyongyang from international retribution at the United Nations after the sinking of the South Korean naval vessel, Cheonan, in March 2010 and North Korea’s shelling of Yeonpyeong Island the following November. Instead of pressuring North Korea, China prioritized stability, with Wen stressing the need to ease tensions and to “put all our efforts without fail to boost peace and stability in Northeast Asia.”

China’s embrace of North Korea came to an end with Kim Jong-il’s death in December 2011 and the emergence of young leader Kim Jong-un, who has since displayed distrust and disdain for Chinese efforts to constrain North Korea’s nuclear development. The timing of North Korea’s third nuclear test in February 2013 coincided with Xi Jinping’s ascension to power as China’s top leader and seemed to set a tone of independence from Beijing. The result has been serious estrangement and distance between China and North Korea despite their common ideological origins and fraternal and geographical bonds.

After the North’s third nuclear test, Xi supported a tougher-than-expected UN Security Council resolution, took a harsher stance on China’s long-standing provision of energy to North Korea, and authorized China’s implementation of UN sanctions. Xi then traveled to Sunnylands, California, for a bilateral summit with Obama in the summer of 2013 where he was willing to explore Sino-U.S. cooperation on North Korea. He stated clearly that denuclearization of North Korea was a priority for China, alongside the maintenance of stability on the Korean peninsula. Xi told Obama that China and the United States were “the same in their positions and objectives.” However, China’s overall stance toward North Korea, remained constant as it jointly pursued “peace and stability, denuclearization of the Korean Peninsula.”

Xi has shown his displeasure with Kim Jong-un by abandoning efforts to maintain a special relationship with North Korea’s founding and ruling Workers’ Party. The bilateral relationship was downgraded in 2013 to “normal relations between states.” Xi has also met South Korean President Park Geun-hye six times despite not yet personally meeting with Kim Jong-un. Xi has insisted on North Korean commitments to denuclearization as a precondition for resuming top leadership exchanges with Pyongyang.

The December 2013 execution of Jang Song-thaek emerged as a further roadblock to the advance of China-North Korea relations under Kim Jong-un. Jang, a special envoy to China, had been the primary North Korean counterpart in the establishment of two major economic development zones at Hwanggeumpyong and Rason along the China-North Korea border. Jang’s execution represented a shock and setback to Sino-North Korean political cooperation. Yet while diplomatic ties between the neighbors cooled, economic exchanges continued. Official bilateral trade peaked in 2014 at $6.87 billion. China announced restrictions on North Korean financial relationships in May 2013, but China’s sporadic implementation of sanctions has done little to prevent North Korean state-owned enterprises from embedding themselves in Chinese supply chains, which has been an effective means to evade UN sanctions and to secure materials for nuclear and missile development.

North Korea’s sudden invitation of Liu Yunshan, the Chinese Communist Party’s fifth-ranking member, to participate in commemorating the seventieth anniversary of the Korean Worker’s Party in October 2015 appeared to signal a thaw in relations. In his October speech, Kim Jong-un did not directly mention nuclear development, but neither did Pyongyang provide Liu Yunshan with a pledge to give it up. Three months later, North Korea conducted its fourth nuclear test.

China’s initial response to the fourth nuclear test was slow. Foreign Minister Wang Yi, rather than President Xi, fielded phone calls with South Korean and U.S. counterparts. Nearly a month passed before Xi finally held phone calls with Obama and Park. During the call with Xi, Park pushed for tougher sanctions on North Korea and asked China to exert its leverage on the Kim regime. In response, Xi told Park that “under any circumstances, China will consistently make efforts to realize Korean-Peninsula denuclearization, safeguard peace and stability on the peninsula and resolve problems through dialogue and negotiations.”

For Beijing, the only thing worse than a defiant North Korean buffer is a shared border with a unified peninsula under Seoul’s control of Seoul, tied to the alliance with the United States.

North Korea’s defiance of China spurred closer Chinese cooperation on fresh UN sanctions, as North Korea announced a missile launch on the eve of the arrival of Chinese Six Party Talks representative Wu Dawei in Pyongyang in February. The launch interrupted Chinese New Year festivities and prompted Chinese cooperation with the United States on a UN Security Council resolution that amounts to a call on member states to quarantine North Korea and inspect all goods shipped in and out of the country. It is hard to imagine more that Kim Jong-un could do to antagonize China, his patron and largest external supporter.

Yet Kim has thus far had good reason to take Beijing’s economic support for granted. He knows that China’s main objectives are to prevent instability and war on the peninsula, so he may judge that China may be willing to acquiesce to a nuclear North Korea to avoid the greater dangers of potential military conflict. Likewise, Kim can capitalize on Chinese geostrategic fears: For Beijing, the only thing worse than a defiant North Korean buffer is a shared border with a unified peninsula under Seoul’s control, tied to the alliance with Washington.

One of China’s strategic objectives is to ensure that relations with its Korean neighbor remain friendly. Yet growing hostility from North Korea may lead China to take heed of South Korean reassurances and come to find that a unified peninsula can be a favorable outcome. Beijing might be reassured if there were a clean way to avoid chaos, pull the plug on Kim Jong-un’s nuclear program, and start with a relatively clean slate. Indeed, that is a tall order, but if Xi and Obama expand policy coordination on North Korea in light of shared dangers arising from the Kim regime’s commitment to becoming a nuclear state, it would mark an important start.