Egyptians will vote for president on May 26–27 in an election expected to ratify Field Marshal Abdel Fattah al-Sisi’s rule in a landslide. As army chief, Sisi oversaw the ouster of former president Mohammed Morsi and subsequently served as the country’s de facto leader. In the eleven months since, Egypt’s chief opposition, the Muslim Brotherhood, has been battered by a violent crackdown and legal prohibition; its supporters are boycotting the vote. Though Sisi has eschewed campaigning and his platform remains opaque, he will assume office facing a fragmented state, an economy in shambles, and a low-level insurgency. Four experts weigh the state of governance in Egypt more than three years after its uprising and the prospects for a Sisi presidency. 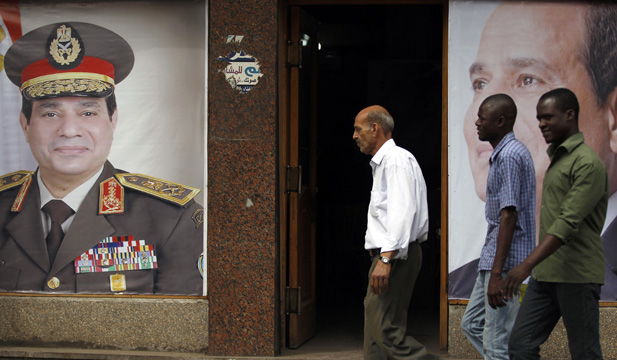 Abdel Fattah al-Sisi’s election will complete the second component of the roadmap to guide Egyptian politics after the July 3 coup d’etat, following the adoption of a new constitution in January. The next phase is slated to come in the fall with the election of a six-hundred-seat parliament. As expected, the Egyptian government and its spokespeople have already begun to hail the presidential elections as the next step in Egypt’s "transition to democracy." This seems unlikely.

"Egypt is no closer to becoming a democratic polity."

Sisi’s election is not a turning point, but rather the continuation of a convergence of political developments that began to undermine the democratic promise of the January 25 uprising well before the military stepped in to oust President Mohammed Morsi. Although all of Egypt’s political actors have consistently expressed fealty to the revolution, they have also sought to advance their agendas through non-democratic means. This is as true for the current interim government as it was for the Muslim Brotherhood and the Supreme Council of the Armed Forces before them.

Now, well into the fourth year since Hosni Mubarak was deposed, Egypt is no closer to becoming a democratic polity than before and is confronting a panoply of problems that has likely set back that now-distant dream even further. For all of the resolve and determination that Sisi has projected, he does not have the answers to an insurgency in the Sinai Peninsula, a destabilized border with Libya that has allowed weapons trafficking, the potential for a solvency crisis, a mobilized and angry population, and the Muslim Brotherhood, which is determined to delegitimize the political process and the new government it produces. Added to this potent mix is a public discourse that abets polarization and violence.

Sisi will likely apply force and coercion in an attempt to gain political control, but this may not work, leading to more uncertainty and instability. If it does work, Egypt’s authoritarian path will be clear. Needless to say, neither outcome is good for Egyptian society.

Field Marshal Abdel Fattah al-Sisi only released his economic program less than a week before elections, perhaps thinking it a waste of energy to put it up for debate. His priorities are nonetheless clear. Sisi wants to get the Egyptian state, battered by three roller-coaster years, back in shape, and with it, the country’s economy. Belts must be tightened as difficult, long-postponed reforms are carried out, he argues. As he recently told a television audience, he has "nothing to give" the Egyptian people.

This brutal honesty is what differentiates Sisi’s economic outlook. The challenges he has highlighted are the same ones that others, including former president Mohammed Morsi, whom he deposed last July, centered upon: conserving electricity, reforming fuel subsidies, creating jobs, improving infrastructure, reducing the fiscal deficit, and weaning Egypt off foreign assistance. What may give Sisi a better chance is the strong support he has received from major state institutions, as well as from the Gulf countries that have channeled some $20 billion to Egypt since last July.

Economic success, however, will hinge upon political choices. Two questions will loom large over prospects for Egypt’s economy.

The first is whether the rift in Egyptian society caused by the overthrow of Morsi and subsequent crackdown on the Muslim Brotherhood and other groups will impede reform and recovery. Sisi has vowed that there is no role for the Brotherhood in Egypt’s future, but he will face unrest by disgruntled Islamists who want him to fail, just as Morsi’s opponents continuously undermined him in 2012–2013. Major economic reform is likely impossible while that rift lingers, and growing state repression alienates even Sisi’s one-time allies.

The second question is whom Sisi will surround himself with. His regime is still being formed, and competition to be in its circles of influence is fierce. The lobbies that made radical reform difficult, if not impossible, during Hosni Mubarak’s rule are still present in the bloated, often corrupt state and among a business class that often benefited from cheap energy and other state favors. Private-sector businessmen worry about an outsized role for the military, Sisi’s base, in the economy. And ordinary Egyptians, the biggest lobby of all, desperately want to see improvements in their lives. This battle to define economic policy is bound to impose constraints on Sisi’s avowed "tough love" agenda.

Egyptians will elect a new president next week, but this will not cement a democratic transition. Quite the opposite: It will bury the promise of democracy and plant the seeds for the next revolution.

Field Marshal Abdel Fattah al-Sisi is the certain winner of this election. Backed by the instruments of state power, including the tightly controlled media, government ministries, and a repressive judiciary, he has not bothered to campaign.

As leader of the coup that ousted the freely elected president Mohammed Morsi, Sisi bears responsibility for the imprisonment of some nineteen thousand Egyptians on political charges, killing of hundreds of others, and restrictions on basic freedoms. Authorities arrest people for making even tepid criticisms of the government, and repress religious minorities. Antiterrorism restrictions criminalize any contact with the Muslim Brotherhood, including that of journalists, at least twenty of whom have been detained. The secular April 6 movement, which helped organize the anti-Mubarak revolt, was recently banned, and courts have sentenced about seven hundred people to death.

The United States should hold Egypt accountable. Washington’s assent to a "roadmap to democracy" that does not guarantee fundamental rights is a policy failure. Neither the reputation of the United States nor its interest in stability is served by unquestioning support for authoritarianism.

U.S. interests in Egypt include continued respect for the peace treaty with Israel, counterterrorism cooperation, and access to the Suez Canal for commerce and airspace for military operations. But the Obama administration must understand that these interests are undermined by acquiescing to the Egyptian military, now more powerful than ever due to a new constitution that puts it above the law, unaccountable to civilian authority.

The United States should freeze military aid, which Egypt now complacently expects. Though Persian Gulf states give more aid than the United States, there is a qualitative difference: For reasons of interoperability, financing, effectiveness, and the prestige that comes from top-end American equipment, U.S. aid cannot easily be replaced. This would be a wake-up call inviting a reevaluation of the now staid, thirty-five-year-old relationship.

Washington must tie improved relations and the resumption of military aid to guarantees of fundamental human rights and political inclusivity, as well as the reversal of convictions of pro-democracy NGOs. Nothing less will satisfy the requirements of democratic change in Egypt or U.S. investment in the bilateral relationship.

Egypt’s security situation has deteriorated since the military’s ouster of Islamist president Mohammed Morsi in June 2012. In the face of escalating repression and state violence, the country has witnessed the intensification of anti-state violence in mainland Egypt, a low-level insurgency in the Sinai Peninsula, and dangerous sectarian discourse. Security forces have borne the brunt of these attacks. The government’s overbearing response has reached far beyond the militant sphere, even beyond the Islamist sphere, to quash all dissent. This escalating cycle of violence has undermined economic stabilization and produced a potent form of anti-Islamist hypernationalism.

The government blames the violence on the Muslim Brotherhood and branded it a terrorist organization, but no credible evidence supports this overly broad assertion, despite the adoption of crude forms of terrorism by individual members. The graver security threat comes from jihadi groups that have capitalized on the current climate of repression to further their rejectionist aims.

Egypt is now set to elect as president former military leader Abdel Fattah al-Sisi, who led Morsi’s removal. Stabilizing Egypt is a central issue, but the state’s capacity is in doubt. It has not operated as a coherent whole since the fall of Mubarak; to the extent institutions have functioned at all, bureaucrats have furthered their institutional prerogatives instead.

"Stabilizing Egypt is a central issue, but the state’s capacity is in doubt."

Sisi will find it difficult to exercise control over state organs. Despite the armed forces’ leading role after Morsi’s removal and unrivaled institutional perch, they reprised their post-Mubarak approach to governance, eschewing decision-making on critical issues and failing to exercise discipline with respect to the security sector and criminal justice system, opting instead to protect their institutional interests without squandering political capital on measures needed to stabilize Egypt. The police, judiciary, and public prosecutor have worked unhindered, recklessly egged on by hypernationalism in both state and private media. Stitching the state back together again and correcting its course will require vision and leadership not in evidence.

Sisi will be in a position to begin this difficult task if he so chooses. It requires reining in abusive police; freeing thousands unjustly detained, including foreign journalists; dialing back hysteria in political discourse; and allowing dissent. Sisi could then begin to reintegrate Islamists into political life.

But even at this stage, it is unclear if Sisi is willing to fight institutions on which he will rely. His platform is rudimentary, and his electioneering has been limited. Even he will face resistance from recalcitrant corners of the state if he seeks reform.

It is this question of intent that remains unanswered, particularly since the current approach will not succeed in re-imposing a sustainable repressive stability. Security forces have improved their targeting, and levels of terrorist violence are not intolerable. But continued police violence, the arrest of activists and journalists, and the stigmatization of dissent should give no confidence that a course correction is being contemplated. As such, Egypt’s near-term future is likely to be as unstable as its sub-optimal present.