Afghans will choose among eleven contenders for the presidency on April 5. The stakes are high: The election promises to bring Afghanistan’s "first peaceful and democratic transfer of executive power," writes Andrew Wilder of the U.S. Institute of Peace. But some degree of fraud is inevitable, and after the votes have been cast, backroom dealing may sway the outcome, says Martine van Bijlert of the Afghanistan Analysts Network.

More From Our Experts
Christopher M. Tuttle
Working With a Rising India

The leading candidates have all promised to end the uncertainty facing the country by signing an agreement with the United States that would enable the long-term presence of foreign troops (and foreign funding) to support Afghan forces. Outgoing president Hamid Karzai has rejected the agreement—a move meant to bolster his nationalist credentials and secure his legacy, says historian Amin Tarzi. Meanwhile, the Taliban will try to spoil the elections by suppressing the vote and casting the next administration as illegitimate, writes journalist Anand Gopal. 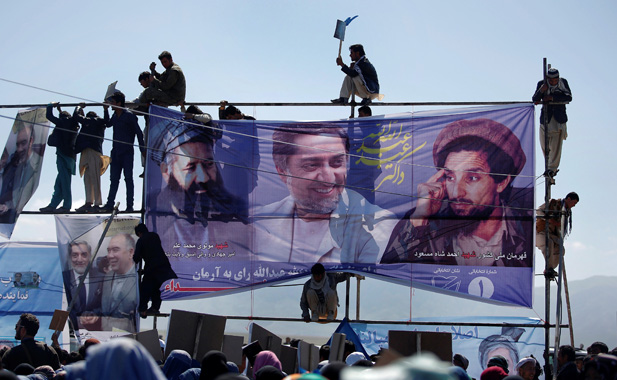 Afghanistan’s upcoming presidential election is arguably the country’s most significant political event since the Bonn Agreement established its post-Taliban order in December 2001. With President Hamid Karzai constitutionally barred from seeking a third term, a successful election would be Afghanistan’s first peaceful and democratic transfer of executive power. It is also critical for the country’s stability and economic viability.

"Unprecedented numbers of Afghans are participating."

A successful election would have three main characteristics: higher turnout than the 2009 presidential election, less fraud, and a result accepted by the losing candidates. This would restore the state’s legitimacy, create opportunities to build on the remarkable gains of the past twelve years, and repair the Afghan-U.S. relationship.

A failed election, on the other hand, could hand a major victory to the Taliban. It might lead to civil war as major political and ethnic factions take up arms, and the Afghan National Security Forces (ANSF) could splinter along ethnic lines. Afghanistan could also once again become a haven for terrorists and threaten the stability of nuclear-armed Pakistan.

More From Our Experts
Christopher M. Tuttle
Working With a Rising India

International assistance will inevitably decrease as troops withdraw and donor fatigue sets in. While a government perceived as illegitimate would provide donors an excuse to radically cut their assistance, a reform-oriented government emerging from a legitimate election would encourage many to maintain moderate levels of assistance, especially if they saw steps taken to fight corruption.

Karzai has squandered enormous amounts of goodwill in the United States, bringing to an all-time low Afghanistan’s relations with its largest provider of civilian and military assistance. A legitimately elected successor will have the opportunity to reset the relationship, beginning by signing a bilateral security agreement (BSA), which the White House has made a necessary condition for a post-2014 U.S. troop presence. The BSA, which all the leading candidates have promised to sign if elected, will not only ensure training and support for the ANSF, but also more robust civilian assistance.

The Taliban has made clear its intent to disrupt the elections, but despite the threatened and actual violence, unprecedented numbers of Afghans are participating in the country’s most vibrant campaign ever. The country faces huge uncertainty, and Afghan voters recognize that they have a responsibility to vote, not only for a new president, but also for a peaceful future.

Even for the professionally optimistic, it is difficult to imagine fraud-free elections in Afghanistan. The political stakes are high, institutions are both partial and divided, and campaigns have co-opted electoral staff. Insecurity facilitates gross interference in large parts of the country, and the excessive distribution of voter cards (twenty-one million cards have been distributed for about thirteen million eligible voters) encourages fraud. The Independent Electoral Commission (IEC) has formulated fraud mitigation policies, but these will prevent only a small portion of the irregularities—mainly multiple voting by individuals—leaving it and the Independent Electoral Complaints Commission (IECC) with the unattractive job of sifting through a messy vote and deciding which ballots to count.

This election has no obvious winner: there are three strong contenders, but none has the clear advantage. How well they fare will be determined by voters’ decisions, observers’ vigilance, security incidents, logistical setbacks, and the ballot disqualification process. As each candidate is likely to claim victory, the count process threatens to be tense and drawn-out, with various groups jockeying to influence the outcome.

"Even for the professionally optimistic, it is difficult to imagine fraud-free elections."

Although many commentators speak as if violence is the norm in Afghan politics, in reality the threat of violence is often mainly used to press political negotiations and to force the sharing of power. Massive fraud or an unwanted outcome will probably not spark spontaneous anger, and it is unlikely that angry candidates will turn against the state, but they may well choose to play with fire by mobilizing crowds and playing on their emotions. It is a high-stakes game that will be solved through brokered backroom deals while the country holds its breath.

International actors can help by not inflating expectations of a clear-cut win or a relatively fraud-free election, and by discouraging inflammatory behavior. They can also help by refraining from playing favorites, watching the process until the very end, and toning down overly simplistic analyses, ethnic or otherwise.

As the campaign convoy of candidate Abdullah Abdullah wound its way through the mountains outside of Kabul last month, Taliban gunmen opened fire, nearly killing him and his aides. Two weeks later, police foiled a bomb attack against Ashraf Ghani, another leading contender. Not long after, campaign workers for presidential hopeful Gul Agha Sherzai were gunned down in Helmand. That same week, in northern Faryab province, unidentified gunmen killed three Abdullah supporters, warning that they would sever the hands of anyone who voted on election day.

"The Taliban’s goal is to delegitimize the incoming government."

The Taliban has vowed to "target all workers, activists, callers, security apparatuses, and offices" in order to disrupt the April 5 presidential election. This means that the turnout in the south and east, where the movement is strongest, is all but guaranteed to be exceedingly low, although these numbers will likely be masked by widespread ballot stuffing. The Taliban’s goal is to delegitimize the incoming Afghan government, much as it had done with the Karzai administration. This strategy will be all the more crucial to the movement’s survival if U.S. troops withdraw, since the Taliban portrays itself as fighting a client regime.

In the 2009 presidential election, the Taliban succeeded in keeping southern voters away by launching an unprecedented number of attacks on polling centers and Afghan government forces. While the insurgency is weaker today—the movement has lost ground in Kandahar and Helmand—it is still active in roughly half the country, and enjoys outright control in some areas. But the Taliban is far more disarticulated today; it now consists of distinct factions, some of which are no longer under the control of the Pakistan-based leadership. And the departure of foreign troops may persuade some to give up the fight. However, the relentless stream of abuses perpetrated by the Afghan government and U.S.-backed militias and the Taliban’s undying belief that only religious law can save the country ensures that the battle will continue for years on end.

As expected, U.S. president Barack Obama has told his counterpart, Hamid Karzai, that the Afghan leader’s refusal to sign a bilateral security agreement (BSA) would prompt the withdrawal of all U.S. forces by the end of this year.

Afghanistan’s security situation is likely to deteriorate if U.S. and other foreign forces withdraw [in the aftermath of the April presidential elections]. The BSA would provide a safety net for Afghanistan’s security forces and a light American footprint to mitigate terrorist threats. In November 2013, a loya jirga—a consultative grand assembly—overwhelmingly endorsed the BSA. However, Karzai rejected the loya jirga’s position and instead offered a list of grievances against the United States.

To better understand the rationale behind Karzai’s position on the BSA and his increasingly anti-U.S. sentiments, one must look to Afghanistan’s history.

"Karzai is trying to ensure that Afghans remember him as a fearless nationalist."

Earlier this year Karzai compared the BSA to two documents that nineteenth-century Afghan rulers signed with British India: the 1879 Gandumak Treaty and the 1893 Abdul Rahman–Durand Agreement. Afghans regard them as humiliating agreements under which Afghanistan lost its sovereignty and large tracts of territory that are now part of Pakistan. The former can be considered foreign-imposed; the latter, however, was fairly negotiated. The Afghan amir was cognizant of its provisions and participated in crafting it.

Karzai ignores this history and instead embraces a notion, held by the majority of Afghans, that the 1893 agreement was forced upon Afghanistan. In his mind, were he to sign the BSA, his legacy would be like those of his nineteenth-century predecessors who are regarded as having served foreign interests.

Two goals seem to be driving Karzai as he obstructs a long-term U.S. footprint in Afghanistan. Karzai is trying to ensure that after he leaves office he will continue to hold clout with successive administrations in Kabul as well as insurgent leaders, and that future generations of Afghans will remember him as a fearless nationalist who had the temerity to face down the much more powerful United States.

In Search of Peace, the U.S. Must Not Sacrifice the Rights of Afghan Women

Women and the Afghan Peace Process: A Conversation with Wazhma Frogh

Wazhma Frogh, co-founder of the Women and Peace Studies Organization in Afghanistan and member of the Afghan Women’s Network, reflects on the importance of women's participation in the ongoing Afghan peace process.

Women This Week: Electoral Gains Across the Globe

Welcome to “Women Around the World: This Week,” a series that highlights noteworthy news related to women and U.S. foreign policy. This week’s post, covering May 18 to May 28, was compiled by Rebecca Hughes, Alexandra Bro, and Rebecca Turkington.