Russia’s assault on Ukraine has pushed Finland and Sweden to apply for membership in the North Atlantic Treaty Organization (NATO), putting them on a fast track to join the transatlantic alliance if political hurdles can be overcome. Their accession would dramatically expand NATO’s border with Russia and mark a further entrenchment of the geopolitical rivalry.

The Finnish and Swedish governments formally applied for membership on May 18, kicking off an intensive diplomatic process that could see the two countries join NATO within months. Supporters worked to build momentum around NATO’s annual summit, this year on June 28-30 in Madrid, where alliance leaders are meeting to discuss the war in Ukraine, China’s increasing influence, and a new Strategic Concept. “Finnish and Swedish NATO membership is a no-brainer on all counts. It is a win-win proposition for the Baltic Sea region, the alliance and European security,” writes Alexander Stubb, former prime minister of Finland. “Applicants do not get more NATO compatible than this.”

The two Nordic states, like all applicants, must meet political, economic, and military requirements, and demonstrate that they will uphold all of the policies and principles set out in the 1949 Washington Treaty, the alliance’s charter.

To grant membership, the governments of all thirty current NATO members must sign and ratify the so-called accession protocols for Finland and Sweden. In the United States, this requires the president’s signature and the approval of two-thirds of the U.S. Senate. Both President Joe Biden and Congress are expected to move quickly in support of the process.

The most significant hurdle has been objections from Turkey regarding the two countries’ support for a Kurdish militant group in Syria, the People’s Protection Units (YPG). Ankara views the group and its alleged ties to the Kurdistan Workers’ Party (PKK) as a terrorist threat. However, on June 28, Turkey agreed to lift its objections to their membership after Helsinki and Stockholm pledged to toughen their approach to these groups and lift their restrictions on arms sales to Ankara.

Are they ready to join?

Finland and Sweden have worked with the alliance for nearly thirty years, and they are widely regarded as capable security partners. They joined NATO’s Partnership for Peace in 1994 and both contributed personnel to NATO-led operations in Afghanistan, the Balkans, and Iraq. In 2014, they became two of just six Enhanced Opportunity Partners and have since worked to increase their militaries’ ability to operate with NATO forces. Sweden recently hosted more than a dozen NATO allies and Finland in BALTOPS 22, a major maritime exercise in the Baltic Sea.

What would be the security implications of membership?

Finnish and Swedish membership is expected to bolster the alliance’s eastern flank and its collective defenses in northern Europe. Perhaps the most significant impact would be the stretching of NATO’s border with Russia. Bringing in Finland would more than double the length, adding roughly 800 miles of frontier. And Finland and Sweden together would vastly expand the alliance’s presence in the Baltic Sea and the Arctic Circle.

Prior to its invasion of Ukraine in early 2022, Russia heavily criticized U.S. and allied leaders for NATO’s post–Cold War expansion into the former Soviet bloc and sought binding security guarantees from them, including a permanent ban on any new members. In recent weeks, President Vladimir Putin said Finland’s and Sweden’s membership bids posed “no direct threat to Russia,” but he has warned the two countries about becoming bases for NATO forces or equipment. Swedish leaders have stated that they don’t want to host NATO assets; Finland has yet to indicate its preferences. Neighboring Norway, a NATO member, allows allies access for exercises but does not permit permanent installations or nuclear weapons. 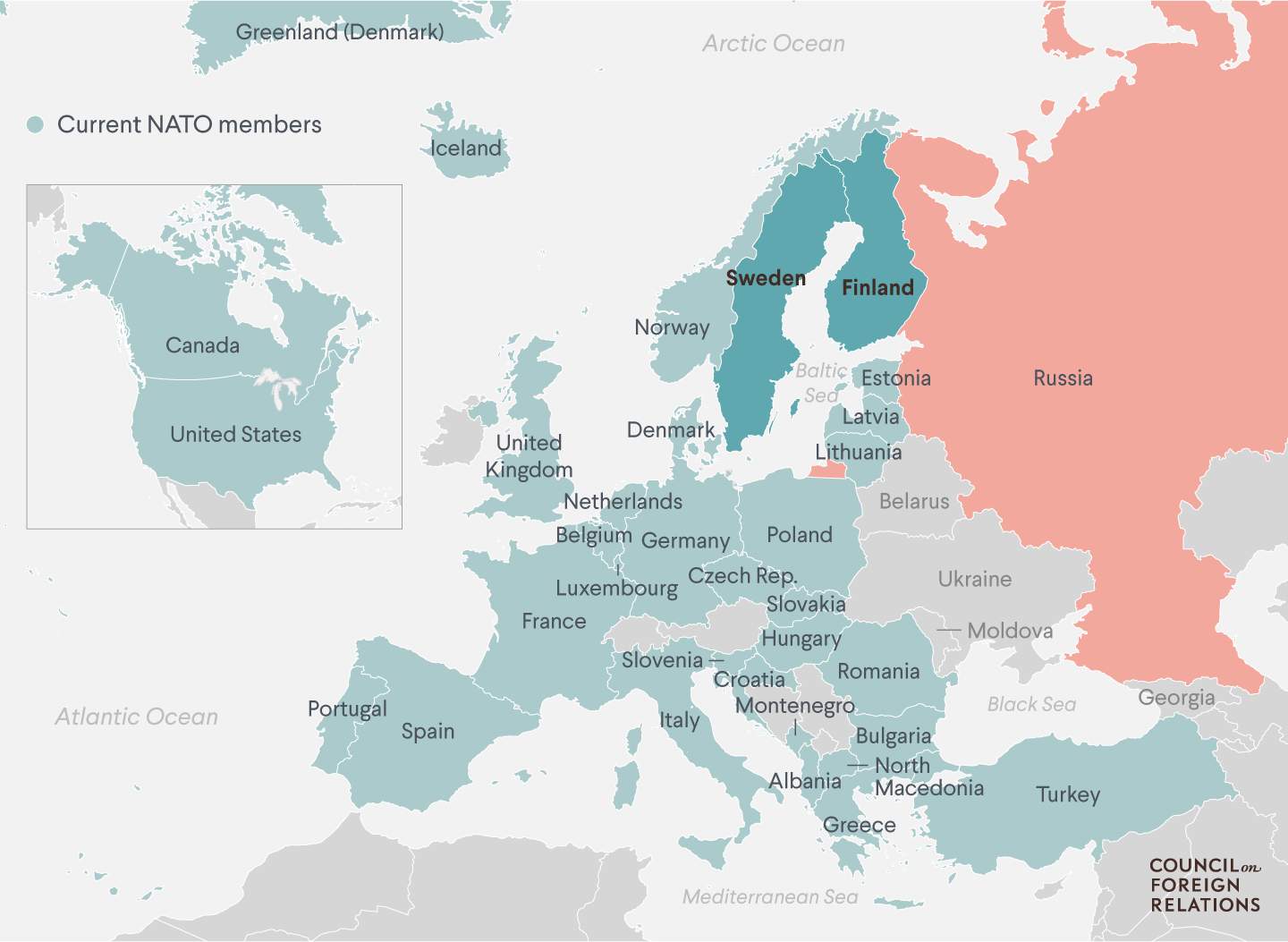 The proposed expansion is expected to enhance security for the Baltic states, who have been NATO members since 2004 and whose defense planners have long worried that Russia could seize Finnish and Swedish islands in the Baltic Sea, particularly Gotland, and use them as bases to launch attacks on their territories. Some Western military analysts have said that NATO would almost certainly need basing rights in Finland and Sweden to defend the Baltic states. Baltic leaders strongly support the Nordic states’ accession and continue to press other alliance members to boost NATO’s military deployments in their countries.

Bringing Finland and Sweden into the fold is also expected to strengthen NATO’s deterrence in the Arctic, a region where Russia has invested heavily in commercial and military infrastructure. Finnish and Swedish accession would bring all Arctic states, except Russia, into NATO, allowing the alliance to pursue a more coherent strategy in the region.