Japan’s governing coalition, led by Prime Minister Shinzo Abe’s Liberal Democratic Party (LDP), expanded its majority in snap elections held this past Sunday. With four more years in office, Abe is expected to redouble his efforts to enact structural reforms—the "third arrow" of his macroeconomic plan known as Abenomics. Despite the victory, CFR’s Sheila Smith stresses the enormity of the challenge that lies ahead, which will require "significant adjustments in the norms of Japanese society." Smith also applauds recent efforts on the part of the Japanese and Chinese governments to normalize relations in the wake of heated territorial disputes and the resurgence of historic antagonisms. 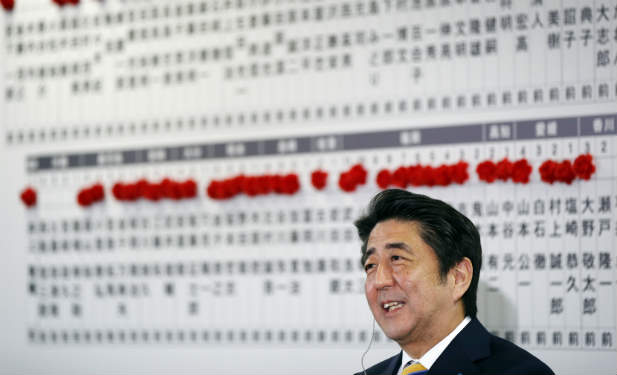 Japan just held early elections. What do the results tell us about the political climate in Japan?

More From Our Experts
Sheila A. Smith
Spotlight on Japan Fall 2020

Prime Minister Shinzo Abe surprised everyone a few weeks ago by dissolving the Diet, the lower house of parliament, and calling for an early election. The opposition parties, in particular, were ill-prepared for the campaign. At the time, the ruling coalition already had a two-thirds majority, but Abe decided that he needed an electoral mandate for his economic policy agenda, better known as Abenomics. This past weekend, the electorate returned Abe, his LDP, and coalition partners to power with numbers similar to those that he had pre-election. All in all, his electoral gamble paid off, and he now has four more years to govern.

What kind of momentum can we now expect on the reform agenda given Abe’s stronger mandate?

Abe wants to pursue economic growth and improve the fiscal health of the Japanese government. The two-staged hike in the consumption tax, from 5 to 8 percent in April and another 2 percent next year, was designed to help increase government revenues. He has postponed the increase in the consumption tax until 2017, putting off the goal of tending to Japan’s debt until the economy gains some traction. In the short run, we should expect the Abe cabinet to concentrate almost exclusively on economic growth, and this will require serious structural reforms.

What kind of actions need to be taken for deeper, structural reforms to take root?

The prime minister uses the metaphor of "three arrows" to discuss his macroeconomic plan.  The first arrow is fiscal stimulus. To date, the Abe cabinet has spent money largely on public works that have been beneficial for rural areas and job creation, but has yet to be a real engine of growth. The second arrow is monetary policy. Haruhiko Kuroda, the governor of the Bank of Japan, has been more than willing to assist by targeting a 2 percent inflation rate and aggressively pursuing his goal, making the Bank of Japan an important driver of Japan’s economic recovery. These efforts have drawn global attention, although some experts have questioned the limits of quantitative easing.

"Many of these reforms call for significant adjustments in the norms of Japanese society. It’s a huge agenda and there is no one silver bullet."

The third arrow includes a broad range of initiatives geared at restructuring the economy. In Japan, a variety of social and institutional obstacles must be addressed to achieve sustainable economic growth. Demographics are at the heart of Japan’s economic challenge. The Japanese population is ageing rapidly, and the younger generation will inherit a heavier burden for the economy’s performance. Their needs must be considered in tandem with their parents’. Abe’s agenda also includes encouraging greater female participation in the workforce, as well as enacting significant tax, agricultural, and labor market reform. At some point, Japan will need to overhaul its social security system as well. Many of these reforms call for significant adjustments in the norms of Japanese society. It’s a huge agenda and there is no one silver bullet.

More From Our Experts
Sheila A. Smith
Spotlight on Japan Fall 2020

In addition to Abe’s emphasis on revitalizing the Japanese economy, there has been talk of his interest in revising the constitution to strengthen the military. Where do these initiatives stand?

Negotiations are still underway for the Trans-Pacific Partnership. What are some of the issues that could derail its passage?

Abe has been a vocal TPP advocate and has embraced the notion that the TPP is good for Japan. This trade deal could give Abe’s cabinet the leverage that it needs to implement some long overdue changes. Today, bilateral negotiations between the United States and Japan are in their final stages, but it’s important to remember that the TPP is a multilateral framework. However, the United States and Japan are the two largest economies participating in TPP negotiations, so it’s very important that they continue to lead.

The TPP would create a new level of trade liberalization, and part of the ambition is to standardize norms and rules. On that front, the United States and Japan share the same sense of what needs to be accomplished. The second piece of the deliberations focuses on market access. The timing and sequencing of reducing barriers to trade is critical for some sectors in both of our economies. The political calculus involves Abe cabinet’s juggling its interests at home while bringing this complex multilateral trade deal to fruition in Washington. Furthermore, they are also looking beyond the TPP to Asian countries that are not in the trade agreement. We cannot forget that the TPP is a strategic instrument as much as an economic instrument.

What are some of Abe’s strategic and diplomatic goals?

When Abe came into office at the end of 2012, he made it clear that he wanted to restore Japan’s standing in the world. He came to Washington in February 2013 and gave a speech at the Center for Strategic and International Studies in which he said "I am back and so shall Japan be (PDF)." He has been very active on the global stage, visiting more than fifty countries in his first two years in office, and he is committed to having a strong Japanese voice weighing in on global economic management and regional diplomacy. Abe has also made very clear that Japan is a responsible member of the G7. When Russia annexed Crimea in March 2014, Abe endorsed the G7 sanctions despite earlier efforts to strengthen ties with Russian President Vladimir Putin.

Last month was packed with Asian-based summits, notably a long-anticipated meeting between Abe and Chinese President Xi Jinping. What other steps must be taken to kick start a thaw in Sino-Japanese relations?

"Across the board, the gears of collaboration [between Japan and China] have been set in motion."

The meeting between Abe and Xi at APEC was important, in large part because it allowed the Japanese and Chinese to come together and talk about how they are going to manage the Senkaku/Diaoyu islands dispute that broke out in 2012. A day or two before the actual summit, members of the two governments reached a basic four-point agreement. While they could not resolve the sovereignty dispute over the islands, they wanted to do everything that they could to reduce the risk of escalation in the region. The agreement addressed a baseline risk of armed conflict, and represents a significant breakthrough in terms of easing the path forward. The Japanese and Chinese governments have begun that process at a working level to talk about how to enhance confidence building, what kind of risk-reduction mechanisms should be used, and how they are going to continue to make sure that these measures are implemented. It’s not just talk; it’s an institutional arrangement that would help in case of an incident.

Across the board, the gears of collaboration have been set in motion. Tokyo and Beijing now hold regular consultative and diplomatic meetings. We should not expect this to be a rapid process: It’s going to happen in fits and starts at a working level rather than a high summit level.

The reality is that these are two strong Asian leaders. Xi’s mandate is strong. Abe just extended his time in office and he, too, is enjoying a strong political moment. The third party in the region, President Park Geun-hye in South Korea, should also not be ignored. Abe also had dinner with Park at APEC, which spurred a renewed effort by South Korea to reinvigorate the trilateral diplomacy of Northeast Asia. Both South Korea and China have experienced renewed tensions with Japan since 2012, having to do with territorial disputes and historic grievances. In part, the Japan-China relationship has now become intertwined more fully with Japan’s relationship with South Korea and the constellation of interests in Northeast Asia.

The challenge of hosting the Olympic Games in Tokyo amid the coronavirus pandemic has confounded Japan’s government, but postponing the Olympics further does not seem to be an option.