Skip to main content
Are North and South Korea Back in Business?

After threatening South Korea and the United States with preemptive nuclear strikes last spring, North Korea has tamped down its rhetoric and looks poised to reopen the Kaesong industrial complex, says Korea expert Marcus Noland. Closed unilaterally by Pyongyang in April, the joint industrial park has been "the centerpiece of North/South economic cooperation," he explains. But despite its gesture of reconciliation, North Korea still faces tremendous credibility problems, says Noland. "The idea that you can just engage in this arbitrary and capricious behavior, harm the economic interests of your partners, and then just say, ’Let’s all be friends,’ is not persuasive." 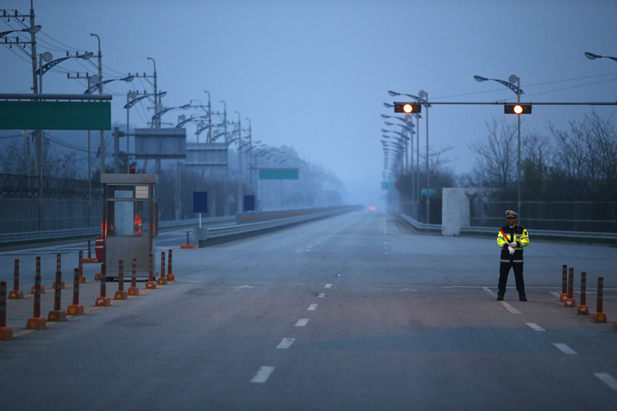 North Korea is in the midst of a leadership transition that is still playing out. There has been a considerable amount of churning of individuals at the upper echelons of the government. There is conflicting evidence about the role of the military, the party, the cabinet ministries, and so on. One thing that is notable is that the North Korean government has unveiled a doctrine called the "Pyongjin Line," which calls for the parallel development of nuclear weapons and economic expansion. So economic development and militarization are supposed to proceed simultaneously.

How is this working?

I view it as a contradiction. It’s hard to see how one promotes a constructive process of globalization and cross-border economic integration while one is brandishing nuclear weapons in a provocative way. This spring we came through a very bad patch, as you alluded to, and it is still hard to understand what motivated North Korean actions.

The upshot of this is that while the North Koreans closed the Kaesong industrial complex—the centerpiece of North/South economic cooperation in April—after an abortive effort to reopen in July, it may just do so now.

What does the North-South economic relationship look like these days?

"[The Kaesong complex] seemed to have a coalition of support both within South and North Korea to keep it going, even if other bad things were happening in the relationship."

In a perfect world, South Korea would be North Korea’s largest economic, trade, and investment partner. But North Korea has a very hazardous business environment. Because of a series of provocations starting in 2010 involving the sinking of a South Korean naval vessel, the Cheonan (forty-six sailors killed), and the bombing of two small South Korean islands, South Korea imposed new policies with regard to economic interaction with the North. It had the effect of basically bringing to a halt any normal trade relations.

The only way North and South Korea were really interacting for the last year or two has been through the Kaesong industrial complex, which, weirdly enough, seemed to have a coalition of support both within South and North Korea to keep it going, even if other bad things were happening in the relationship. The North Koreans make about $100 million in hard currency a year from Kaesong. This is not $100 million in wages that goes to the workers—this goes straight to the regime, which then pays the workers a pittance in North Korean currency.

At the time of its closure in April, upwards of fifty thousand people were working in the Kaesong industrial complex. They worked for more than a hundred South Korean firms. Many of these businesses have availed themselves of various forms of South Korean public policy support: investment guarantees, low interest rate loans, and so on. So Seoul is very intimately involved in supporting the activities of those firms. And if the zone was to close and the firms were unable to continue their operations, some of them could make claims on the South Korean government under various insurance programs.

There was a lot of discussion at the time whether the South Koreans were blowing this up out of a fit of diplomatic pique, but in retrospect, the more plausible explanation is that the North Koreans felt compelled to show they were doing something positive before President Obama and Chinese president Xi Jinping met in California—so when Obama and Xi walked into that meeting together on June 7, the last news they had heard from the Korean peninsula was that the North Koreans were behaving more responsibly.

And when the talks in July broke down?

Seoul moved to pay off insurance claims of the South Korean firms in Kaesong, which would have cost the country about a quarter of a billion dollars, at which point the South Korean government would be the owner of all those assets. So in effect, the South Koreans called the North Koreans’ bluff.

What you have in Kaesong are, to a large extent, financially weak, small and medium-sized enterprises that are supported through South Korean public policy programs, hoping to make money and pay off their creditors on other business ventures and then move on. So they are financially troubled firms, dependent to a surprising extent on the Kaesong business. These are not big South Korean firms that can afford to have Kaesong shut down and just write it off.

In the case of North Korea, it appears that the army has never been happy with Kaesong because it created a perforation within the DMZ. However, because they were getting $100 million a year in hard currency, other factions prevailed. So basically, when the South Koreans announced they were going to put down the quarter billion dollars in order to pay off the insurance claims and take possession of the assets, that’s when the North Koreans came back and said, "We want to talk again."

So what does it all mean?

"The idea that you can just engage in this arbitrary and capricious behavior, harm the economic interests of your partners, and then just say, ’Lets all be friends,’ is not persuasive."

I have visited some of these factories—you have got some making electrical wire, and presumably they are selling that wire to some electronics firm that is fabricating it into a computer or a TV or something like that. And I wasn’t able to make my deliveries on the wire, and Samsung is mad at me. So [North Korea] is in effect saying "sorry." But that’s not good enough. From an economist’s standpoint, the North Korean government has a horrendous problem with credibility, and this is not the first time something like this has happened. The idea that you can just engage in this arbitrary and capricious behavior, harm the economic interests of your partners, and then just say, "Let’s all be friends," is not persuasive.

In a normal economic circumstance, you would have to engage in what we call pre-commitment to make your commitment credible—for example, waive all taxes for the next five or ten years, or waive wage payments for the next six months. Something to induce people to come back and give you another try.

And in the world of politics?

Then we have the world of politics. My sense is that South Korean president Park Geun-hye has played this whole situation very adroitly. But nevertheless she is going to face pressure in the National Assembly from the opposition party and elements of her own party to overlook some of this and make good with the North Koreans. There is a constant tendency in South Korean politics to engage with North Korea—you have people who are ideologically committed to engagement generally in the South Korean center-left and center-right, either for ideological reasons or just for business reasons. They generally pressure the government not to take a hard line on these things.

But that’s been shifting over the last few years with these [North Korean] provocations. South Korean public attitudes have hardened, and that’s one of the reasons the conservatives have won the last two presidential elections.

So while getting wages waived for six months or taxes waived for five or ten years might be the outcome one would get in a pure economic scenario, in a political scenario, the North Koreans are probably correct to believe that they can get away with more.

Are the Chinese pushing the North Koreans hard on this?

No. My sense is that the Chinese have a number of other things to worry about at the moment—for example, a slowing economy, the Bo Xilai affair, and other matters—and that it’s not concerned about North Korea right now. As a consequence, North Korea policy gets run by the apparatus, and that’s in large part the foreign ministry and the army. If the North Koreans do something really outrageous, the upper level guys [in China] notice, and policy shifts.

My sense is that this spring, North Korea’s behavior was sufficiently provocative that they probably started to get more high-level attention [from China] than the problem normally receives. One gets the sense that the Chinese were willing to go along—with a little less kicking and screaming than in the past—with the UN sanctions [passed in May after North Korea’s third nuclear test]. And even though the implementation of the sanctions has never really occurred in China, one got the sense that, at least in the financial sphere, there was a little more pressure being brought to bear.

But I don’t think the Chinese have made any radical change in policy or that there has been a hardening of attitudes. But at the margin the Chinese were not happy with the North Korean antics in the spring, and they’ve started to shorten the leash a bit.

So, at the moment, do you expect these talks to go ahead and Kaesong to reopen?

I don’t know if they’ll open immediately, but, yes, losing $100 million dollars a year probably hurts; and having the Chinese annoyed probably hurts. And the South Koreans, because of their own political dynamics, are probably not going to push the North Koreans as far to the wall as one might expect in a less politicized environment. I think in the end, they will work it out and start it up again.

Tariffs have been applied over the years to protect homegrown industries and target competitors who are seen as using unfair trade practices. They impose costs on both importers and exporters and had been in decline until the recent U.S.-China trade spat.