With the World Cup approaching, residents of the slums surrounding Rio de Janeiro have been lashing out against the statewide "pacification" plan launched in 2008 to curb drug violence and lawlessness. Under the program, military police units occupy the slums, known as favelas, and evict drug gangs, but residents have accused police of brutality, adding to the country’s seething discontent in the run-up to the mega sporting event.

Janice Perlman, founder and president of the Mega-Cities Project, says Rio lost an important opportunity to improve the lives of favela residents by focusing on military approaches rather than funding social services. "It’s a tense moment," Perlman says. "In addition, if Brazil loses the games, it would be likely to cause massive depression psychologically, economically, and politically." But she says there may be an opportunity to remedy the state’s approach to the favelas before the 2016 Olympics, also to be held in Brazil. 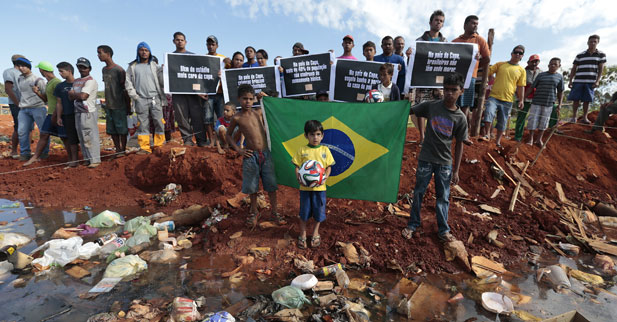 Residents of the Santa Luzia slum holding protest placards against the government’s spending in preparation of the World Cup. (Photo: Joedson Alves/Courtesy Reuters)

Can you give of a snapshot of the problems that were being faced by favela residents in Rio de Janeiro before pacification started in 2008?

[The favelas] provide housing for some 1.7 million residents today—people who cannot afford to buy or rent in the formal housing market. Their location has enabled generations of new arrivals to access work, education, and healthcare and offer better opportunities for their children.

At the end of the military dictatorship, with the promise of democracy and direct vote improving favela conditions, the "war on drugs" crackdown in Colombia led to the rerouting of the cocaine trade, part of which went through Rio de Janeiro. The favelas afforded a convenient hiding place for the drug traffic due to the steep hills, winding alleyways, and, most of all, the lack of police presence—the absence of the state.

In one favela after another, elected leaders were forced out and replaced by agents of the dominant drug gang. The lucrative drug and arms trade led to violent turf wars between gangs punctuated by intermittent police raids during which the motto was, "Kill first, ask questions later." At the same time, militias composed of off-duty policemen and firemen took control of other favelas, charging transaction fees, extracting "protection payments" and killing with impunity anyone who disobeyed their rules.

As more and more favelas were taken over by the traffic or the militias, lethal violence reached an all-time high. The drug lords became ever more brazen, closing down commerce in Rio one day with threats to kill any storeowner who opened shop, and shooting up the municipal office building. Public security took on greater urgency with Rio’s successful bids for the World Cup and the Summer Olympics.

This was the context in which the state government launched the UPP—the Pacifying Police Units—in November 2008. The goal was for the state to take back control of the territory from the narco-traffic.

How does pacification work?

First of all, the very word "pacification" was an affront to the favela residents, who did not see the military police invasion as a liberation, but as a 24/7 occupation.

The idea behind the UPP was zero tolerance for carrying firearms, and the reassertion of state control. The first operation began with a surprise attack by the Special Forces, but that ended in disaster with scores of innocent people killed in the shootout. It was replaced by prior announcement of the invasion date, giving the drug lords the opportunity to move out and avoid armed confrontation.

Once that was done, the police set up a barracks and began patrolling the community. They were not well received by the residents, who had experienced their indiscriminate violence, refusal to pay local businesses for food or drinks they consumed, and their obvious collaboration with gangs in the confiscation and resale of arms and drugs. The favela residents had more confidence in the dealers, so the entire premise was shaky from the start.

The human and social services—"Social UPP"—were supposed to begin providing benefits to the community residents as soon as it was safe to do so. The planned job training, computer labs, improved schools and family clinics, sports and leisure facilities, and a whole array of other services were supposed to show the positive side of state presence by reaching out to the people and helping them reintegrate into the rest of Rio de Janeiro society.

What has been the outcome of the program so far?

The program expanded rapidly and now covers thirty-eight favelas at an expenditure of about $360 million dollars annually. Only one of them is in a militia-controlled area, and almost all of them are located at strategic sites for the World Cup or the Olympics. It appears that this rapid expansion outpaced the capacity to recruit and train the pacifying police, and that there was an increase in the abuse of power. Residents were bullied, beaten up, and began disappearing. Recently, a bricklayer was tortured and killed in a case of mistaken identity, and a wounded female bystander in another incident was stuffed into the trunk of a police car, fell out, and was dragged to her death.

"The situation has deteriorated so severely that the national army has been called in to maintain order."

Incidents like these increased over the past year, but particularly in the past three months, as tensions grew with the upcoming World Cup. This overall discontent provided an opening for some of the drug gangs to reappear and challenge the UPPs in armed confrontations. The situation has deteriorated so severely that the national army has been called in to maintain order.

What can be learned from this?

I see this as a policy case study of missed opportunity. In the first several years of the UPP, when I was doing field research on people’s perceptions of the program, I saw a feeling of great relief at the freedom to come and go at will, despite the expressed caution—to sit out on the steps in the evenings listening to music and no longer fear that children would be killed in the crossfire on their way home from school. In some communities, people had lived for twenty-five years in a state of tension. If their relief at being able to conduct daily life without fear had been reinforced by the delivery of social services and by a participatory process for determining community needs, this crisis might have been avoided.

There was always—and still is—the suspicion that the day the Olympics are over in 2016 will be the day that the UPP leaves and the drug dealers come back. So nobody ever wanted to make an alliance with the UPP officers, because they knew that they would pay dearly when the traffic returned.

How do you see these tensions playing out as the World Cup gets underway?

That’s a prediction that no one can make. Everyone is hoping that with a bit of luck the marvelous city will pull together and Brazil will take its place as a mature democracy on the world stage.

This is a decisive moment. It has repercussions for Brazil’s economy and polity—even for the reelection of President Dilma Rousseff. If the World Cup proceeds peacefully—without the sense of it occurring in a police state—and if Brazil happens to win, that would provide more than a boost in morale.

"There was always—and still is—the suspicion that the day the Olympics are over in 2016 will be the day … the drug dealers come back."

If, on the other hand, there is uncontrolled violence—if protests break out and the police react with force—it will be tragic regardless of the outcome of the games. If in addition, if Brazil loses the games, it would be likely to cause massive depression psychologically, economically, and politically. It’s a tense moment.

Do you foresee another opportunity to improve this situation after the World Cup?

I’m an optimistic person. I would love to see a reversal of the repressive approach to dealing with the violence borne of exclusion, inequality, and struggle for livelihoods. In the two years before the Summer Olympics, there is an opportunity for a mid-course correction. If the 1.7 million people living in Rio’s favelas were included as part of the solution—if substantial investments were made in education, job training and work opportunities (some generated by the games themselves)—and if any new infrastructure was considered for its social use and value after the games, then perhaps the military will not be necessary in 2016.

My hope is that the next two years can demonstrate the value of tapping into the intelligence, energy and potential of the favela residents rather than treating them as a problem to be kept under control. I am keeping my fingers crossed that Brazil, and Rio especially, can get through this event and have another chance.