Skip to main content
Is Britain Retreating From the World?

When the British head to the polls on May 7, they will be taking part in one of the most pivotal general elections in recent history, says Chatham House’s Richard G. Whitman. “This general election will determine what Britain’s place will be in the world in a way that no other general election has done previously, but the importance of this is chronically under-discussed,” he says. Ascendant third parties like the UK Independence Party (UKIP) and the Scottish National Party (SNP) are disrupting the status quo and the focus of this campaign season has shifted inward. Despite the lack of foreign policy debate in the run-up to the elections, pressing questions about the United Kingdom’s relationship with Scotland and the EU loom, Whitman says. 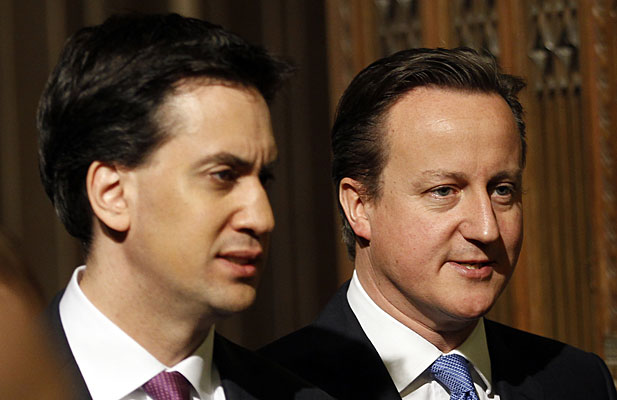 Nate Silver recently forecasted “an incredibly messy outcome” for the UK elections. Why is no party in a position to garner a decisive majority?

Right now, most of the opinion polls suggest that the share of the votes between the two main political parties, the Labor Party and the Conservative Party, is really too close to call. This election will come down to a very small number of seats, and there could be some surprises on the day of the election.

This is all part of a long-term trend. If you look at the post–Second World War period, you haven’t had many governments with very large majorities. The few elections where you did have substantial majorities—for example, Margaret Thatcher’s or Tony Blair’s—have hidden this trend of smaller majorities in the British system. It’s partly because of the breakdown of party loyalty, but it’s also because we’ve seen the rise of alternative parties, which have upset the electoral landscape of the UK.

Both the Tories and Labor Party face challenges from these alternative parties. How are UKIP and the SNP altering the dynamics of the election this year?

UKIP succeeded in the European Parliament election last year. And the party has done very, very well when tested at the national level. They tend to take support away from the Conservative Party because of its position on Europe—they are seeking an exit from the EU—which is a more extreme position than the Conservative Party position. This is hitting the Conservatives in two ways. One is that the Tories are losing a bit of their activist base, and it’s an aging party base anyway, so it’s hurting them on the ground. But it’s also hurting them in terms of the moves that [Prime Minister David] Cameron had to move more to the right on issues [like the UK’s membership in the EU], which means that he’s losing the center.  That center has gone a bit to Labor and some is going to the Greens. Not much of it is going back to the Liberal Democrats, who have been really hurt by being in the coalition government [with Cameron’s Conservative Party].

The SNP, on the other hand, is an unexpected insurgent party. Up until the referendum on Scottish independence last year, Labor seemed to be hanging on to its vote share in Scotland. In a very short space of time, there’s been a shift in Scotland away from a rock-solid allegiance to Labor over to  the SNP, and it’s difficult to see how that will go back.  And that is very profound problem for the Labor Party that’s always relied on Scotland as a kind of bedrock support. The surprise for most commentators is how quickly Labor has collapsed in Scotland. This is not a sort of gradual decline; this is a dramatic, almost overnight decline.

This is where life gets interesting, because the British political system doesn’t necessarily require formal coalitions.  We’ve had governments without working majorities in Parliament in the past, and what they’ve done is they’ve entered into informal agreements with other parties.

It’s quite possible that you could have a result in which either Labor or the Conservatives don’t enter into a formal coalition with either UKIP, for the Conservatives, or the SNP, for Labor. One possibility this election cycle is that we have a government that decides not to enter into a formal coalition and struggles on for a few months until we have another election in the autumn.

But the most likely coalition is a Labor-SNP coalition, and Labor knows that it is a prospective coalition partner. The interesting question is, "What does the Scottish National Party want?" The answers are pretty straightforward: money and more powers for the Scottish Assembly. I think Scottish nationalists would regard that as a stepping stone toward devolution.

Do you think a coalition government between Labor and the SNP would set Scotland up for eventual independence?

The UK already enjoys certain opt-outs vis-à-vis the EU: It’s not part of the eurozone or the Schengen Area. Why does the UK’s relationship with Europe remain so fraught?

It’s actually the Conservative Party’s problem rather than the British public’s problem. And one of the interesting things about the general-election campaign is that you’ve actually seen consolidation and growth in support of the UK remaining a member of the EU.

The problem that David Cameron has is that part of his party has vociferously opposed the UK’s membership in the EU. They’ve only become more outspoken on that issue. Everything that Cameron has done to mollify that wing of his party has been insufficient. And that’s why he found himself committing to a referendum on membership, which many in the educated elite in the UK think is a disastrous proposition—not because the European Union’s inherently a good thing, but because of the uncertainty that such a referendum creates.

What are the main issues shaping this election?  And what role does foreign policy have to play?

The economy is not helping the current government. And UKIP has picked up on the immigration issue. They’ve done a very, very clever pirouette in that they don’t talk about Europe—they talk about immigration. Rather than asking if the UK should be a member of the EU, they talk about [intra-EU] migrants.

Aside from the Europe issue, there’s been no significant debate on foreign policy in this election, which is incredible when you think about the sort of foreign policy challenges in Europe at the present time, as well as the larger structural shifts within international relations.

Watch this Chatham House video on the foreign policy challenges that will face the next UK government.

How important is this election for the UK?

This general election will determine what Britain’s place will be in the world in a way that no other general election has done previously, but the importance of this is chronically underdiscussed. Britain could look very different, could feel very different, and could be a different kind of partner to its allies over the next couple of years as a consequence of this election. As political elites become more navel-gazing and less engaged with the wider world, the UK’s international standing will diminish.