Britain finds itself at an unusual crossroads this summer as it negotiates a fraught relationship with Europe and prepares for a possible Scottish secession. "It is extraordinary for such an ancient realm to be going through this identity crisis," says The Times’ Steven Erlanger, a veteran observer of the British scene. In the coming months, Britain will face the Scottish independence referendum and a general election, whose outcome could change not only the makeup of the Westminster parliament but also that of the European Union. As for Britain’s special relationship with the United States, Erlanger says that while the tenor remains cordial, disappointment over Cameron’s failed vote on Syria last summer and the uncertain fate of the EU-U.S. trade deal have put a strain on transatlantic ties. 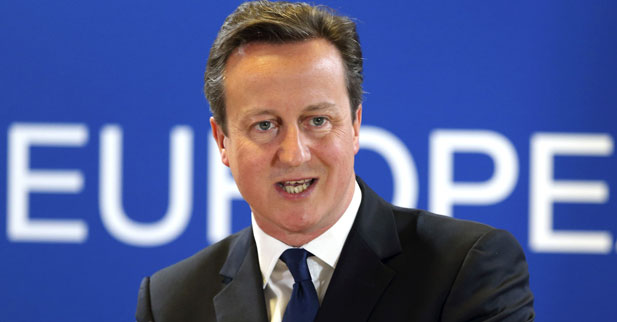 What are some of the challenges facing Prime Minister David Cameron in the coming months?

There’s a general election coming next May, so the parties are gearing up for that. The anti-Europe wing of Cameron’s Conservative Party, the so-called "Euro-skeptics," is very worried it’s going to lose votes to the [nationalist] UK Independence Party and its leader Nigel Farage. So Cameron is spending quite a lot of time managing his own party right now, which doesn’t really help him on the European diplomacy front.

Why did Cameron so stridently oppose the appointment of Jean-Claude Juncker as the European Commission President? And how has the Europe issue played out in British politics so far?

"It is extraordinary for such an ancient realm to be going through this identity crisis."

Many critics felt that Cameron was trying to placate the Euro-skeptics in his own party by criticizing Brussels and opposing the Juncker appointment. [As for British domestic politics,] the Labor party is still a little bit ahead at the polls, but many have begun to lose faith in its leader, Ed Miliband, who’s trying to pull the party more to the left. Historically, he’s been pretty pro-Europe, but he’s treading lightly around that issue right now. And the current coalition partner, the Liberal Democrats, have dropped badly in the polls—penalty for being in power with a bigger party—and Nick Clegg, who’s very pro-European, has lost considerable standing.

The thing to remember is that Cameron has promised an in-or-out referendum by 2017 if he wins the next election next year. But at this point, it’s by no means guaranteed he’ll win. The Labor Party so far has refused to make the same pledge of a referendum. So it’s not clear that it is going to happen. And if it does happen, it’s very possible that Britons would choose the EU, just like they did in 1975 under former prime minister Harold Wilson.

What about this referendum in Scotland? Would the Scots really secede from the United Kingdom?

It is extraordinary for such an ancient realm to be going through this identity crisis. The Scottish National Party, led by Alex Salmond, has been pushing for a referendum. Much to everyone’s surprise, they won a ruling majority in the Scottish parliament, which let them proceed with a referendum. Salmond had wanted a two-question referendum: the in-or-out question, and something called "devolution max," which would allow more home rule on the part of Scotland. But Cameron insisted that it be limited to the former on the theory that the Scots would be afraid of leaving the United Kingdom. And Salmond, of course, had been hoping that they could vote for more autonomy, though obviously he defends independence now. So it’s a real fight.

The Scottish independence referendum will take place on September 18. Right now, there’s a lot of nastiness playing out on both sides, particularly on social media. Scots, by and large, lean toward Labor in their political views; they’re more center-left really. (Keep in mind that there’s only now one Tory MP in all of Scotland. It’s not like there are no Tories in Scotland, but they’re spread out and Labor dominates.) So, if Scotland does secede, there are questions about how the loss of Labor MPs from Scotland would reshape the Westminster parliament. And what would happen if Scotland votes to stay in the European Union—Scots are very pro-Europe—and then Britain, later, votes to leave it? There are all kinds of questions that are up in the air right now for a country as old as this one.

What are some of the issues at stake in the lead-up to the referendum?

Scotland has oil and gas, and frankly, as a nation, could stand on its own. But would it be better off on its own? Or less well off? For some people, of course, that doesn’t matter. That’s just the price of independence. But many people are very worried, and their worries are amplified by the campaign against independence. They’re worried about their jobs, pensions, and Scottish productivity rates, compared to the rest of the United Kingdom—in short, they’re worried that Scotland will somehow be weakened by secession.

There are also a lot of questions that Alex Salmond has not been able to answer. He originally proposed using the euro, but given the euro’s problems, Salmond recently expressed a desire to continue using the pound. But British politicians of all parties—the Tories, the Liberal Democrats, and Labor—have said they will not allow Scotland to use the pound. And then some people argue that if Scotland does use the pound, it would not have true independence because the country would be dependent on the Bank of England and the British tax system. The other thing that’s unclear is EU membership. If they vote for independence, Salmond argues that Scotland should be able to enter the EU as a successor state. But, thus far, Brussels has said that that they would have to start the process from the beginning. So, again, a big question that no one can really answer [at this juncture].

What do the polls show?

Well, the polls have been going up and down a little bit, but they still show that the "no" vote would win. People lie to pollsters, and it’s an emotional issue. But, for the moment, it looks like it could be a narrow vote, but that Scotland would vote to stay inside the United Kingdom. But it’s not a done deal by any means.

How special is the relationship between the United States and the United Kingdom these days?

Well, on the surface, the relationship looks fine. But there’s a lot of concern about the Obama administration—the feeling that the red lines go pink and then somehow disappear. And the British vote over Syria last August was really problematic. The Obama people were pressing very hard for Cameron to get Parliament’s backing to join the Americans and the French and bomb Syria over chemical weapons. But the vote got mismanaged, and Cameron ended up losing it. And that was a big blow to him and to Obama, who in the end pulled back from it. TTIP, the U.S.-EU free-trade deal, also seems to be running into the sand right now as well. In general, there’s a feeling in London that Washington isn’t pushing it very hard, and that it’s having other troubles with Congress.

Obama has said a few words recently about how wonderful the United Kingdom is, and sent a clear message to Scotland that it should stay in the UK. The next NATO summit, which will be held in Wales this September, is the next big meeting that Cameron will host that Obama is planning to attend. The agenda will include NATO’s future in light of the Russian annexation of Crimea, so there will be a lot for these leaders to discuss in the fall.