Europe is on high alert after twin bombings in Brussels killed more than thirty people, bringing mass-casualty terror to the doorstep of the European Union’s headquarters. The attacks, claimed by the self-declared Islamic State, came just days after the capture of Salah Abdeslam in Brussels, where the planner of the November 2015 Paris attacks had been hiding for months. The Belgian capital is at the center of European jihadism due to the large number of foreign fighters returning from Syria, says Ian Lesser of the German Marshall Fund. The bombings "have given ammunition to those in the populist right who want to close national borders," undermining European unity even as governments struggle to improve intelligence cooperation to avert future attacks, he says. 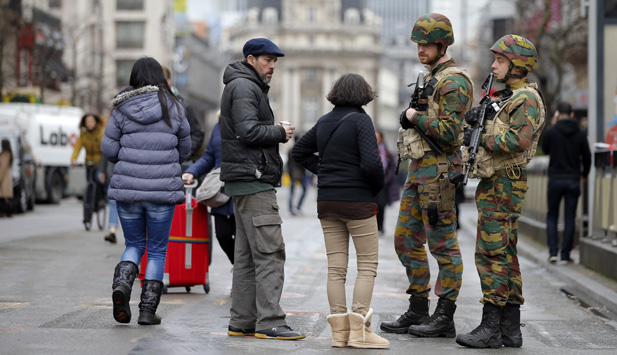 As we’ve seen with recent attacks in Paris, Brussels has been host to jihadis that carried out operations elsewhere. Why is Brussels being targeted now?

Well, Brussels has already been attacked. In fact, in the latest wave of attacks, Brussels was in some ways the first. The attack on the Jewish Museum in Brussels occurred almost two years ago now [in May 2014]. That attack in a sense opened this ISIS-inspired campaign [across Europe] including with the return of foreign fighters from Syria. So Brussels has been at the center of this for quite some time.

“Belgium has contributed the largest number of foreign fighters per capita to the ranks of ISIS, and many of these people are starting to come back.”

Belgium has contributed the largest number of foreign fighters per capita to the ranks of ISIS, and many of these people are starting to come back. Therefore, there’s a large network of radicalized individuals here. Then there’s the highly symbolic nature of the city as the home of the European Union’s institutions, the center of Europe in many ways. In addition, historically it is a entrepot for all kinds of criminal activity, including trafficking in arms and light weapons. Many things come together to make Brussels a center of risk.

Salah Abdeslam, who helped plan the Paris attacks, was hiding in Brussels and had deep networks of support there. The city was already at a high alert level. What does this say about the capacity of the Belgian security forces?

In my view, the Belgian security forces are actually very good, very competent. Nevertheless, they have limited resources. It is a very tough intelligence problem. It is also a very tough law enforcement problem. It has been tough even in countries with very different systems and very different levels of resources. In France, for instance, where there have been a number of attacks in recent years, the counterterrorism system is very different. The French are highly centralized, they have many resources, and yet they too have had a problem with this situation.  So I have a certain sympathy for the Belgian predicament. That said, there are always shortcomings, and ways to do things better. The Belgian authorities are extremely focused on this, along with others in Europe.

There has been tension between French and Belgian intelligence services. How closely are they cooperating?

The impression you get from hearing officials talk about this is that they are doing a lot together. But historically speaking, intelligence services are much better at collecting information than sharing it. Even within Europe, where there are many mechanisms for information sharing, they are still learning as they go. There is a lot going on—if you look at some of the recent counterterror operations in Brussels, they included the French police. This shows cooperation is happening not only at the intelligence gathering level but also at the operational level.

What else could the United States or NATO be doing to support their allies’ counterterror efforts?

Inevitably, efforts are centered mostly on national intelligence operations and local police. But looking forward to NATO’s summit in Warsaw in July, there is a growing expectation that NATO will have something to say about its role in counterterrorism.

“There is no question that after every attack, there is a strengthening of the populist reaction to the flow of migrants.”

There’s a similar challenge for the European Union, where home affairs, justice, and internal security all largely remain national prerogatives. European publics are likely to demand that both pay more attention to this problem.

Speaking of EU responses, what does this mean for the ongoing migrant crisis? Will there be further pressure on the border-free Schengen Area?

[Border controls] have become part of the equation. My own view is that this problem would exist even without the refugee crisis. Is the flow of migrants allowing some trained individuals to come back to Europe from the Middle East and carry out attacks? Possibly. But it is not the heart of the problem. The bigger challenge is the effect on Europe’s political dynamics. There is no question that after every attack, there is a strengthening of the populist reaction to the flow of migrants, because it has not only become a social and identity issue but now a security issue.

Is that populist reaction an existential threat to the European Union?

Quite right. Those parties tend to be looking to renationalize policies and they tend to be anti-EU. They also tend to be anti-American, so the United States is a stakeholder in this as well. These attacks have given ammunition to those in the populist right who want to close national borders and put an end to Schengen. That is an unfortunate and inevitable consequence of these attacks.

On the other hand, at a practical level, the nature of the challenge is clearly that the governments within the EU should be doing more together. There is a disconnect between what is happening on a day-to-day basis, where there is more and more cooperation out of necessity, and the continent’s political perceptions, which are pushing for a more closed and nationalistic Europe.

The EU and Turkey have finished a deal in which Turkey agreed to restrict the flow of refugees in exchange for the acceleration of visa-free access to the EU for Turkish citizens. Is that now at risk?

It is a very complicated deal at many levels. I am very skeptical that it will ever happen, in any case the visa-free access aspect. The political pressures on this front are extraordinarily strong in Europe, and Turkey has to meet many criteria in order to trigger this potential visa liberalization. It would be very hard to implement.