Jeffrey Mankoff, an expert on Russia, says the dispute that led Russia to cut off natural gas to Ukraine and other European states has its origins in differences over pricing as well as Ukraine’s interest in closer ties with the West, including membership in the North Atlantic Treaty Organization (NATO). With new elections due to take place this year in Ukraine, he says the Kremlin hopes a more pro-Russian government will take over, and that "some of these problems will go away."

Russia has turned off the spigots on natural gas to Ukraine and, as a result, this has prevented the natural gas that goes through Ukraine to Europe from flowing. What’s the background to all of this?

The background is a long-running dispute between Russia and Ukraine in terms of gas relationships over two things: One is over the price that Ukraine pays, and the second is over debt that Ukraine owes Russia for gas shipments in the past that it hasn’t paid for. There’s also a political subtext because Ukraine, since 2004, has had a government that is interested in pursuing integration with Euro-Atlantic institutions, including NATO. As a result, the foreign policy landscape for Russia and the shipments of natural gas from Russia have changed. Historically, like other parts of the former Soviet Union, Ukraine had been receiving its natural gas from Russia at a subsidized price, subsidized relative to what European consumers further downstream pay.

That’s because after the Soviet Union broke up in 1991, there was the Commonwealth of Independent States (CIS)?

Yes. For a time in Russia, the Kremlin could argue that there were noneconomic benefits accruing to Russia from subsidizing gas sales to CIS countries. It was an inducement to them to act in ways that Russia found conducive to its own interests. In the aftermath of the Orange Revolution in 2004-2005, however, when [Ukrainian] President Viktor Yushchenko’s government took over and was perceived in Moscow as being anti-Russian, or more anti-Russian than its predecessor, that calculus changed. The Kremlin also is interested in taking control of the distribution infrastructure in Ukraine, of actually owning a stake in the pipelines or in the companies that operate them. In Belarus, which had a dispute with Russia over gas sales in 2007, the dispute was resolved in part by Belarus selling a stake in the pipeline operation. Now, Ukraine has resisted doing that, and as a result, Russia continues to press on the issues of price and debt. 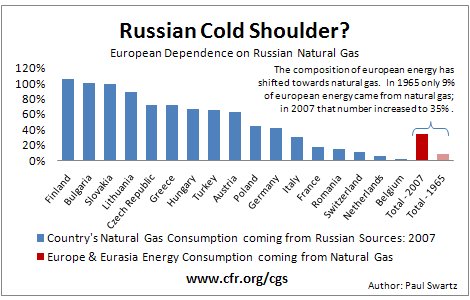 And the price Russia is asking from Ukraine for 2009 is what, about double of what it was from the past year?

Well, they’re still trying to sort it out. The Russians started with a price somewhat higher than what the Ukrainians wanted, and then when the Ukrainians balked at paying more, the Russian strategy has been to jack the price up even farther. And right now, of course, there’s the subtext that internationally, energy prices are down relative to what they’ve been over the last couple of years and the Russian economy--the Ukrainian economy too, but particularly the Russian economy--is hurting. And the Russian government is very wary of giving up any opportunity to generate money. They’re looking for every source of revenue that they can get right now.

No, it’s different, and that’s part of the difficulty here. As you know, oil is sold on a liquid international market. The price that you pay is the same, once transportation costs are figured in, basically anywhere in the world. Natural gas doesn’t work that way because for the most part, it is sold through dedicated pipelines--a pipeline from a field or country where it’s being produced to another country where it’s being sold--and that gas can’t go anywhere else. It has to go through that pipeline. And so, it’s priced on the basis of contracts that are negotiated between the buyer and the seller, and it’s typically a long-term contract that sets the price in advance. It can be multiple years. It can be a year. That reduces the uncertainty, but it also means that the price is relatively inflexible. Now, if you’re talking about LNG [liquefied natural gas], that behaves much more like oil in that it can be put on a tanker and shipped to other countries. So, you have the beginnings of a spot market with LNG, but for pipeline gas, which is what most of the gas that Russia sells to Europe is, it’s on the basis of these contracts.

Ukraine gets paid something for allowing its gas to go through the pipeline to Europe, right?

Right, that’s another element in the dispute right now--the transit fee. In response to Russia’s attempt to raise rates for the gas, Ukraine tried to raise the transit fee that Russia pays to move the gas across Ukraine. For obvious reasons, the Russians have been resisting attempts to raise transit fees, which also has the effect of raising the end-user price that the Europeans pay.

Do the Europeans pay considerably more than say, the Ukrainians have been paying?

Initially, the Russians offered $250. As the conflict escalated, they took that offer off the table and now say they want something around $450.

You would think they would strike a compromise around $220, but we shall see. Now why did the Russians cut off gas everywhere?

A little bit of background is helpful. There was a similar crisis in January 2006, and when Russia and Ukraine couldn’t agree on a price, Russia decided it was going to cut off deliveries to Ukraine, claiming that if a customer doesn’t pay the bills, the provider of the service or product is entitled to no longer provide the service or product. The problem is that 80 percent of the gas that Russia sells to Europe right now goes through these pipelines that cross Ukraine. And so in 2006, the Ukrainians siphoned gas from those pipelines that was meant for Europe. The Ukrainians did that without telling the European Union in advance what they were doing. And, if you remember, it was Russia and the Gazprom that really came in for a beating in the media in January 2006, and because Ukraine was able to continue supplying its needs for gas that was designated for Europe, they were able to weather the storm relatively well. They tried that this time around and the Russian response was to initially cut deliveries to Ukraine by the amount they were siphoning and then essentially cut deliveries entirely to the pipeline across Ukraine.

There seems to be a belief in Western Europe that the gas will start flowing again since everybody needs cash.

Let’s talk more about the politics. We’ve seen Russia lean all over Georgia well before last August’s military incursion. The Russians had banned Georgian imports and things like that. Has Russia been that tough on Ukraine also on the economic side?

No, they haven’t, and you know, one can speculate why that is the case. Some of it honestly may have to do with racism. There is a very strong undercurrent of anti-Caucasian sentiment in Russia.

With Ukraine, there’s not that same sentiment because Ukrainians are culturally and historically very closely connected to the Russians, so it’s more of a family quarrel. And the Russian government is more hopeful about the long-term political evolution of Ukraine than they were about Georgia. Ukraine has a parliamentary election coming up. There are powerful constituencies in Ukraine that are in favor of moving the country closer to Russia, in contrast to the current presidential administration of Yushchenko. There is, on the Russian side, hope that if there is a political change in Ukraine after the election, some of these problems will go away.

I know political polling has shown that the majority of people in Ukraine do not want to join NATO, right?

How will the natural gas dispute be resolved?

Oh, predicting the future is hard. It’s in everybody’s interest--Russia’s, Ukraine’s, Europe’s--to resolve this dispute sooner rather than later. At some point, I imagine, there’ll probably be more active European diplomacy. It’s interesting to note this time that the European response seems to be more balanced in that they are attempting to blame both sides, including Ukrainians, for this situation. So it is different from 2006. For that reason, it’ll be a little bit easier for the Europeans to use their good offices to broker some kind of resolution to this dispute, and because the Europeans are being affected much more directly than they were in 2006, they have a much stronger interest in bringing this to an end.

And of course, Ukraine is broke. They are getting a $164 billion loan from the World Bank.

Ukraine has a lot of problems, and much of that’s connected to the energy sector because its economy is very inefficient. It has one of the highest energy intensity per unit of GDP [gross domestic product] ratings in the world, which is to say that they use more energy per unit of production than almost any other country. In part, that’s a result of their being able to enjoy access to subsidized gas being sold from Russia. There’s a lot of corruption in the energy sector in Ukraine.

What Are Economic Sanctions?

For many policymakers, economic sanctions have become the tool of choice to respond to major geopolitical challenges such as terrorism and conflict.