Skip to main content
Can Iran’s Nuclear Capacity Be Limited?

The nuclear negotiations between Iran and the P5+1 states [United States, Britain, France, Russia, China, and Germany] have been extended through Nov. 24. They will aim to sort out technical issues relating to limiting Iran’s uranium enrichment program but fundamentally the talks are about a political debate within Iran and the United States, says expert Robert Litwak, author of the new book Iran’s Nuclear Chess. In the end, he says, Iran’s Supreme Leader "may balk when it hits the crunch point next November" and Iran would have to limit sharply its number of nuclear centrifuges. 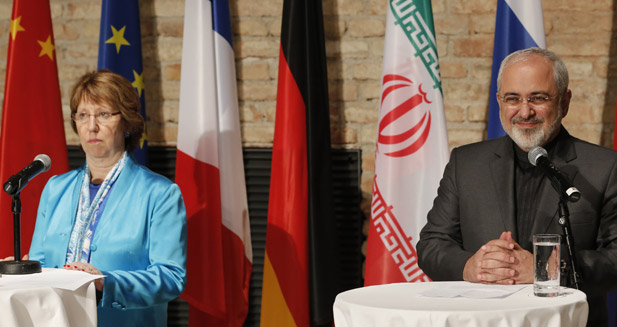 The P5+1 nations [the United States, Britain, France, Russia, China, and Germany] and Iran have now agreed to extend the nuclear negotiations until November 2014. How far are the two sides from a basic understanding that Iran’s uranium enrichment would not be used for development of nuclear weapons?

Iran’s mastery of the nuclear fuel cycle—specifically, its ability to enrich uranium—creates an inherent option, a hedge, for a weapon. The focus of the ongoing negotiations is on limiting Iran’s uranium enrichment program so that the international community has assurance that an enrichment program—ostensibly established to provide nuclear fuel for civilian reactors still on the drawing board—is not masquerading as a weapons program. The technical differences are not insoluble, but the dilemma is that the nuclear issue has become a proxy for a more fundamental political debate on both sides.

The reason that the nuclear question has proved intractable is because of this surrogate status for the more fundamental debate in both countries: in Iran, whether it is a revolutionary state or an ordinary country; in America, the persisting tension over whether the objective should be behavior change or regime change. In the American debate, this proxy status is reflected in proposed U.S. congressional legislation related to the nuclear negotiations that encompasses other aspects of Iran’s unacceptable behavior violating international norms—notably, its state sponsorship of terrorism and human rights violations. The Obama administration is cognizant of these other areas of behavior that violates international norms but is trying to segregate them, so to speak, from the nuclear negotiations.

And of course to change the regime in Iran you would really need military force.

President Obama recast U.S. policy towards Iran and the other so called rogue states when he became president. He dropped the Bush-era moniker of rogue state, calling Iran and North Korea instead "outlier" states. This shift in nomenclature was intended to communicate that the United States was dropping this unilateral American political concept of rogue and instead framing the challenge posed by Iran in terms of its conduct that violates established international norms, in this case with respect to the Nuclear Non-Proliferation Treaty (NPT). In so doing, President Obama created a basis for developing multilateral support for imposing meaningful sanctions on Iran to change its conduct. The Bush administration sent a mixed message whether the U.S. objective was behavior change or regime change. And, therefore, it was unclear whether the United States would "take yes for an answer" if Iran changed its conduct. By focusing on Iranian conduct that violates international norms, President Obama has made clear that his administration would be willing to take yes for an answer if Iran came into compliance with its NPT obligations.

It was very interesting when Secretary of State Kerry was talking on July 15 about his discussions with Foreign Minister Jarad Zarif of Iran. He recalled that the Ayatollah Ali Khamenei, the Supreme Leader of Iran, had made a "fatwa" against nuclear weapons. What did you make of that?

It’s a clever positioning of the American argument. In a sense it’s taking advantage of the fatwa as providing political cover for Iran to do what in fact it said it wants to do, namely not become a nuclear weapon state. The U.S. position is essentially a call on Iran to demonstrably operationalize that fatwa. Its religious status creates political legitimacy and provides political cover for the regime to take the necessary actions that would assure the international community of its benign intentions. In practice, that means extending the so-called breakout period - the period that Iran would need to dash towards a weapon. The breakout period—that is, if Iran moves from a hedge to a weapon—needs to be long enough, at least a year, so that the United States could mobilize international support if Iran were to make that strategic calculation.

What was striking in Secretary Kerry’s statement on the Iran negotiations when he was in Vienna last week was his direct appeal to the Supreme Leader. Because even though President Hassan Rouhani has the nuclear portfolio, the position of president in Iran’s system has limited powers relative to that of the Supreme Leader, who will be the final arbiter of any nuclear agreement. And for the Supreme Leader it comes down to a hard calculation of whether the economic benefits of an agreement, that is sanctions relief, exceed the political costs that Khamenei would bear with hard line elements such as the Revolutionary Guard upon which the regime’s stability and, indeed, survival is based. That strategic calculation, which the extension of the negotiations has essentially put off, again hinges on the proxy status of the nuclear question for that more fundamental debate in Iran on its relationship with the outside world, in general, and the United States, the "Great Satan," in particular. For that reason, the nuclear issue is not a technical issue. You could readily, on a technical basis, reach an agreement with Iran that would allow it to retain some enrichment capacity but that would assure the world that it’s not a weapons program. But because of this proxy status, the issue of nuclear diplomacy, which could culminate in signing an agreement with the United States, is an inherently loaded political question.

The regional context has changed with the Syrian civil war and, within the last month, the extension of the Syrian civil war into Iraq proper. To a limited degree, Iranian and U.S. strategic interests converge—most notably in their support in Iraq of the Maliki government. Overt policy coordination is unlikely, but the new regional context does raise the question whether these new circumstances provide leverage for Iran in their nuclear negotiations. To date, that has not been evident. Iran remains a country with an identity crisis, so to speak. In Henry Kissinger’s apt formulation, "Iran has to make a decision whether it wants to be a nation or a cause." The nuclear issue is the proxy for that fundamental debate—and the outcome is uncertain.