Skip to main content
Can Iraq Survive the ISIS Storm?

The rapid advance of the Islamic State of Iraq and Syria (ISIS) and other Sunni militants in Iraq last week is likely the most dangerous threat yet to the government of Nouri al-Maliki, but it may not be enough to compel the Shia leader to implement needed reforms, says Middle East expert F. Gregory Gause. But the government’s shortcomings won’t lead to its collapse, at least in the short term, he says. "ISIS cannot win this war," because the "organization is just too small to do this, and the Shia Arab majority is already mobilizing against them." The Iraqi government, however, isn’t likely to regain control of its lost territory soon, and Gause expects "the further splintering of governing authority, particularly in Sunni Arab areas of the country." 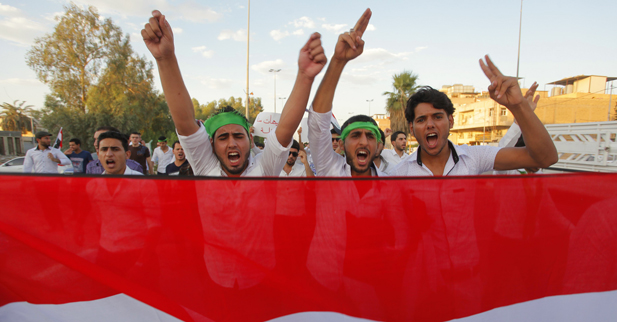 People shout slogans in support for the call to arms by Grand Ayatollah Ali al-Sistani, who is the highest religious authority for Shias in Iraq, in Najaf, south of Baghdad, June 13, 2014. (Photo: Alaa Al-Marjani/Courtesy Reuters)

The governments of Iraq and Syria, such as they are, have not controlled all of the territory within their borders for some time—the government in Baghdad not since 1990. But none of the regional or international powers right now has an interest in recognizing any formal change in the borders. Even the Kurdish Regional Government (KRG) in northern Iraq, which has been de facto independent of Baghdad for nearly a quarter of a century, is not pushing for formal independence.

So what we will see is the formal borders, recognized by other states, remaining the same, but effective political control being exercised by local actors like ISIS, other Syrian rebels, and the KRG in various areas of the two countries.

How is the civil war in Syria fueling conflict in Iraq? Can extremists in Iraq be defeated without confronting the same groups operating in Syria?

The Syrian civil war gave ISIS and other Sunni jihadi groups a cause and a battlefield when it looked like their campaign in Iraq was in decline. Their victories there gave them a base and momentum. But ISIS never really left the Iraqi scene, even at the lowest point of its predecessor, al-Qaeda in Iraq (AQI), after the American surge in 2007 and the emergence of the Iraqi Sunni Arab backlash against AQI, known as the "Awakening."

The salafi jihadi opposition to the Baghdad government was always part of the Iraqi mix. While the upheaval on both sides of the border helps ISIS, it would certainly have been possible to limit its influence in Iraq much more if the government in Baghdad had pursued policies that included Sunni Arabs in the power structure and more effectively integrated the armed groups that were part of the "Awakening" into the Iraqi security services.

Many Sunnis from Mosul say they fear the government’s response rather than the militants who took over the city. Why do Sunnis feel marginalized by Maliki’s government?

Maliki has centralized power in his own hands to a great degree. He has served as his own defense minister and his own interior minister, keeping the two most important security ministries firmly in his own hands. He has not only cut out and marginalized Sunni Arab politicians, but also his nominal Shia allies, which is why many of them have publicly opposed a third term for him as prime minister.

What are the prospects for a political settlement between Sunnis and Shias in Baghdad that could restore the Iraqi government’s authority in Mosul, Anbar province, and other areas? What concessions by Maliki can and should be made?

It remains to be seen whether Maliki believes that the current crisis is so severe that he has to change his ways and try to form a more inclusive government. He emerged from the parliamentary elections of April 2014 with a stronger hand politically, and his past pattern has not been inclined toward inclusiveness.

But it is not just Maliki personally. There is enormous distrust among Iraqi ethnic and sectarian groups, reaching back to Saddam Hussein’s rule and continuing through the horrific violence that characterized Iraqi politics after the American invasion of 2003. There is also profound mistrust even among the leadership within the Sunni and Shia Arab communities. The Iraqi political class has failed the country. The chances that, in this crisis, they can put aside their mutual antipathy and forge an effective government to challenge ISIS are not good.

Prominent Shia clerics in Iraq, including Ayatollah Ali Sistani, have urged citizens to defend the country against Sunni extremists. Is this the end of the project to build a national army?

Not in the short term. The army failed miserably against ISIS, despite the fact that the army units routed by ISIS in the north had the advantage in numbers and firepower. ISIS cannot win this war, if by winning we mean taking over Baghdad and the south of the country, where most of the oil is, and forming a government. The organization is just too small to do this, and the Shia Arab majority is already mobilizing against them.

At some point in the future, in a different political context, a national army might be built among Arab Iraqis. But it will not be soon. The most likely outcome of this crisis is the further splintering of governing authority, particularly in Sunni Arab areas of the country.

What should the United States do to support the Iraqi government?

If I am right that the likelihood that ISIS can actually win this war is very small, there is no need for the United States to contemplate a reentry into Iraq in a direct military way. We can share intelligence with the Iraqi government, as we appear to be doing, and to supply some weapons that might be useful. The Obama administration seems to be trying to use the crisis atmosphere to extract some concessions from Maliki regarding a broader composition for the next Iraqi government. That is not a bad move, though it runs the risk of encouraging factionalism within the Iraqi elite at a time when a united front is required.