Skip to main content
Can Moscow Move Past Assad?

The Russians aren’t as interested in keeping Syrian president Bashar al-Assad in power as they are in protecting the system he has led, says longtime political observer in Beirut Michael Young. "The big question is whether they will stick with Assad or not," he says. In neighboring Lebanon, Young says the general opinion is that the Obama administration has been "indecisive" with regard to strikes on Syria, although many Lebanese fear a U.S. assault would stoke sectarian violence at home. Although Russian diplomacy has thus far shielded Assad from U.S. military action, Young says the Kremlin’s patronage may be fleeting. "Ultimately, Assad may become more of a liability to his allies, who may want to preserve the Syrian system and their interests in that system—but Assad himself may have to go," he says. 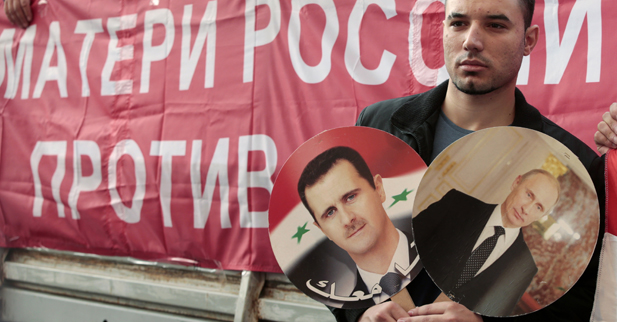 What’s the reaction in Lebanon after the decision by President Obama to hold off on any attack on Syria for the time being and pursue a diplomatic solution with the Russians through the UN Security Council?

It’s a mixed bag. The general view—and it’s shared by both those who support the Syrian regime and those who oppose it—is that Obama has been indecisive. He was supposed to act a couple of weeks ago. Then, at the last minute, he changed his mind and went to Congress. This of course took an extra week to ten days, and now he has decided to go along with the Russian proposal to place Syrian chemical weapons under international supervision. So the perception is that he basically allowed events to overcome him and neutralize what had been a planned attack on Syria.

There are many people who are less politicized who are relieved to see that an attack would not take place, because many Lebanese feared that this would have repercussions here. I think many feared that an American attack on Syria could result in car bombs being exploded in Beirut and elsewhere in Lebanon.* But by and large, the prevailing view of those who follow politics is that this has shown America to be indecisive. And, of course, those very critical of the United States see this as a victory and as a sign of American weakness.

How does Russia come out of this?

Is there any way that the international community can get a ceasefire, or get the parties to Geneva so that the fighting can be halted?

We’ve tended to focus on Geneva as an end, whereas both sides of the conflict in Syria have seen Geneva as a means to an end. In other words, if either the Syrian regime or the opposition doesn’t feel that it can go to Geneva to satisfy its ultimate objectives, then they’re very reluctant to go. And, by the same token, their political patrons are not eager to push them to go.

In the United States, there’s been a tendency to see Geneva as this sort of island that everyone has to swim to: Once we get to Geneva, then we can discuss. But the reality is that the opposition, for instance, when it was pushed initially on the Geneva idea, said, "Well, we’re not going to go to Geneva in a position of weakness, because Geneva will only be used as a vehicle to confirm or to institutionalize our weakness. It will be used by the regime to push its agenda." And I think we can reverse that in the case of the regime. If the Syrian regime feels under pressure, then it too would not go to Geneva.

So the point I’m trying to make is: the preparation of Geneva is really going to be linked to the situation on the ground. If there is a stalemate on the ground, and at the same time there is a consensus between all the parties pushing Geneva, I think it will have a better chance.

The idea today, among many people, is that perhaps we’ve reached a stalemate. But I’m not persuaded that those actors on the ground really feel that way. The regime and the opposition feel that they can make gains before any kind of negotiations begin to take place.

What’s the situation on the ground?

In neighborhoods around Damascus, the Syrian rebels have managed to reorganize themselves. Pro-regime sources in Beirut speak of up to fifty thousand forces around Damascus, which, if true, is a significant number.** This represents, as far as the regime is concerned, the biggest threat to its power, because Damascus, of course, is where everything takes place.

Damascus is much closer to the southern part of Syria, where the rebels tend to be. You don’t tend to have as many of the so-called al-Qaeda–related rebels in the south as you do in the north. So any kind of offensive organized from the south would be perceived differently by the international community.

As some experts have suggested, you have many little wars in Syria taking place today. There are many different types of groups; many of them have an Islamist identity, but that doesn’t mean they’re pro–al-Qaeda. So you’ve got a very, very fractured image here. And on the ground, roughly speaking, in the north, the city of Aleppo is substantially in the hands of the opposition, stretching all the way east to places like Deir ez-Zor, places like Ar-Raqqah—these, in the north and the northeast, tend to be under the control of the opposition.

Meanwhile, you have isolated pockets controlled by the regime. If you look north of the Lebanese border, into the Alawi areas—this is under the regime’s control. Down along the Lebanese border to Damascus, you see that generally this is under the regime’s control, although there have been efforts in recent weeks by the rebels to enter these areas. They’ve tried to enter the Alawi areas in the north, but they were pushed back. In the last week, they’ve tried to enter the area of Maaloula, which is a Christian town on the road from Damascus northward. But it seems now that the regime has managed to push them out of Maaloula. And then south of Damascus, it seems that Daraa still remains under the control of the regime, but in the surrounding areas the rebels have made substantial gains. So it’s a very mixed bag, and it doesn’t suggest that any one party has a decisive advantage.

And is Hezbollah still actively fighting in Syria?

It seems they are. They’re fighting; of course, their main focal point was along the Syrian-Lebanese border. They fought in Qusayr. They were also apparently instrumental in the fighting for Homs— Homs being a very vital strategic area between the Alawi coast and Damascus—and Shia areas in Lebanon. They are also protecting—they are also based south of Damascus, near the Sayyidah Zaynab Mosque. So they are apparently holding strong, important positions, but from what I’ve read in recent weeks, after the initial victory in Qusayr, which was of course much closer to the Lebanese border, Hezbollah has in a way been swallowed into the grinding stalemate of the Syrian conflict.

Bashar al-Assad was interviewed by CBS over the weekend, and he looked very cool and calm, and of course said he had no chemical weapons, and then the next day his government had to admit they had them and were willing to give them up. What is his future?

The main question about Assad—that I think even his allies like Russia must be wondering today—is, in the long term, can you go back to some kind of normalcy with Assad in power? There’s been this big debate in the last two years, almost: What are the Russians’ intentions? Do they want to get rid of Assad or not? I don’t have an answer to this, but my feeling is that the Russians ultimately would like to stabilize and neutralize this situation. I don’t think they’re wedded so much to Assad as a leader as they are to the system that he led. And, ultimately, if their intention is to keep that system alive, to protect their interests in Syria, the big question is whether they will stick with Assad or not.

What do you think?

This is the big sticking point between the Russians and the Americans. And, ultimately, Assad may become more of a liability to his allies, who may want to preserve the Syrian system and their interests in that system—but Assad himself may have to go. The trick, of course, is can you get rid of Assad and preserve the system he led? That’s the big if, the big question.

Right. And lastly, what’s the atmosphere in Beirut like these days? Are people calm? Or are people agitated because of all the tensions about the fighting in Syria? Are people going to nightclubs?

Lebanon has suffered quite a bit from the Syrian war. But people are going out. Life is normal, despite a very sharp economic downturn, despite the fact that car bombs have gone off in Lebanon in different areas, despite the presence of probably a million Syrian refugees. All of this is felt. People are a little bit depressed by the ambient situation. But at the same time, life does go on.

But Lebanon is one of the Arab countries that has perhaps most suffered from the situation in Syria, because it is the weakest, and it has taken on a very, very heavy burden of refugees. Economically, this is probably what you can feel the most. Parts of town that used to thrive are now virtually empty. Stores are not functioning. The much-vaunted downtown area today is often empty. People are not going down there to buy stuff. But in other parts of town, things are more normal.

*Editor’s Note: Due to an editing error, the text incorrectly referred to the possibility of Hezbollah setting off car bombs in Lebanon.