Skip to main content
Can Moscow Step Back From Ukraine?

Steven Pifer, a former U.S. ambassador to Ukraine, says "this weekend’s actions do not augur well" for scheduled talks in Geneva this Thursday, where diplomats from the United States, EU, Russia, and Ukraine will attempt to negotiate an end to the Ukraine crisis. While Pifer believes that granting more local autonomy to the eastern regions would make for more "effective, efficient, and accountable governance," he stresses that pro-Russian separatists are "talking about a lot more than local power." As for Russia’s designs on Ukraine, Pifer says that they encompass more than Crimea. "The fact that Putin has Crimea now doesn’t mean that his larger goal, which is to prevent Ukrainians from getting too close to the EU, isn’t still very much in play," he says. 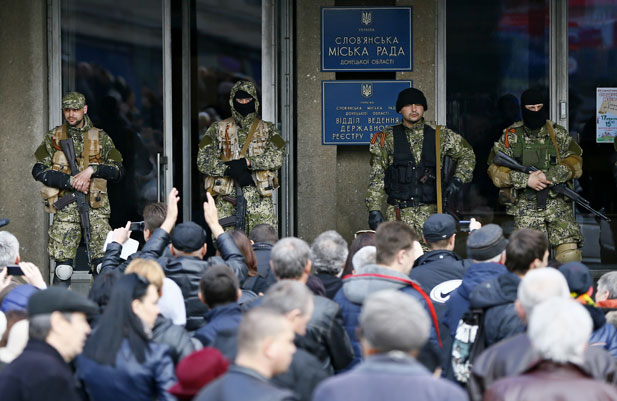 Pro-Russian forces continued to seize buildings and police headquarters in eastern Ukraine over the weekend. What is the impact of these events on the morale of the pro-Ukrainian supporters?

There is little doubt that the recent armed seizures of buildings in eastern Ukraine were instigated by Moscow. I see this as part of Russia’s effort to destabilize Ukraine. Those actions put the acting Ukrainian government in an increasingly sharp dilemma: Does Kiev take back the buildings, which would run a risk of bloodshed and might provide a pretext for Russian military action? Or does Kiev sit back as the number of seizures increases? The acting government may conclude that it has to do something.

Ukraine’s interim president, Oleksandr Turchynov, signaled on Monday morning that he would not be opposed to a referendum on granting regions greater autonomy. Will this concession quell protests?

There’s a separate case to be made about local autonomy. For the last twenty years, too much authority has been centralized in Kiev. Some spreading of authority to the provinces and to local governments would make for more effective, efficient, and accountable governance.

There’s a major meeting in Geneva scheduled for this week. Who’s going to be there? And is there any hope that some deal could be struck?

The big question here is: Does Vladimir Putin want a deal? In recent weeks, the Obama administration has stressed the importance of leaving a diplomatic off-ramp for Putin to get out of the crisis. But it seems that every time that off-ramp is [presented], Putin just hits the accelerator and keeps on going. Right now, the Russians are not only raising the price of gas, they’ve also blocked some Ukrainian exports to Russia. The photographic evidence that we’ve seen of Russian forces on the eastern Ukrainian border indicate they’re trying to keep Ukrainians on edge.

The weekend’s actions do not augur well for the Thursday meeting. For the meeting to progress toward a resolution of the crisis, Foreign Minister Lavrov needs to come to Geneva with some ideas for deescalating the crisis. But that does not appear to be the Russian objective now.

How powerful is Russia’s energy leverage over Ukraine?

Ukraine depends on Russia for about 55 percent of its natural gas, and it is currently in arrears in its payment for that gas. Moscow has threatened to cut off supplies if Ukraine can’t pay what it owes. However, there are a couple of things that work in Ukraine’s favor. One is, by most accounts, they’ve stockpiled three, maybe four months of gas. Second, it’s springtime, so they need less gas for heating purposes. Finally, Russia still moves 60 percent of the gas it sells to Europe through pipelines that transit Ukraine.

What Russia found in 2006 and 2009 was that it could not turn off the gas to Ukraine without also turning off the gas to Europe. Gazprom, the main gas exporting entity in Russia, does not like that because if they turn off gas to Europe, they lose revenue and can be subject to contract penalties for not providing gas. It also diminishes their reputation as a reliable supplier of gas and fuels thinking in Europe [about energy alternatives]. So the Ukrainians are in a difficult position, but by virtue of the fact the Russia still needs to transit gas through Ukraine to places like Germany, Italy, and Austria, they have some leverage.

Apart from their dependence on Russian gas, what are some of the other economic challenges facing Kiev?

It’s calculated that they need to get through this year without defaulting on external debt estimated to be somewhere between $15 billion to $20 billion. That money is potentially there: they have a preliminary agreement with the IMF for a $14 billion to18 billion bailout. There could be additional funds made available from the World Bank and the European Bank for Reconstruction and Development; the EU has also offered quite a bit of money. But the IMF program always comes with reform conditionalities. The idea is basically to use this two-year period when they’re getting IMF financing to put their economic accounts in order so that by 2016 they don’t need to borrow large amounts of money.

These economic reforms are going to cause some economic dislocation and pain. For example, the price of heating will go up as of May 1. [The IMF is] going to require that the Ukrainian currency be allowed to float, which will mean that currency is going to devalue. And they’ll have to end subsidies to some older industries. So, there’s going to be a lot of political pain, and the real challenge is finding a way to persuade the population to bite the bullet and accept the fact that there’s going to be this difficult economic time for the next year or two, with the idea being that once they get through it, they can enjoy a more normal growing economy.

Are they still hoping to hold presidential elections on May 25?

By all indications the government wants to stick to that plan, which is important. The acting government took some shortcuts constitutionally. I think having an elected president gives the person much more legitimacy and will only strengthen the government in Kiev.

Is it likely that tensions in the region will continue to rise?

The focus has been on Crimea for the last six weeks, but I don’t think the endgame was about Crimea. The fact that Putin has Crimea now doesn’t mean that his larger goal, which is to prevent Ukrainians from getting too close to the EU, isn’t still very much in play. The sorts of pressure that we’re seeing, including this buildup in military forces on the Ukrainian border, are designed to destabilize the government in hopes of thwarting that.

Now, I don’t believe the Russian military will enter eastern Ukraine. I don’t exclude it, but I think it’s unlikely. Part of the reason is that I believe the Russians understand that were there to be a broader military intervention in eastern Ukraine, the Ukrainian military would fight. It may be out-gunned, out-manned, and underfunded, but it would fight. And I think the Russians would also have to worry not just about a force-on-force fight, but also partisan warfare once they begin to take territory.